All because two people fell in love...

We've seen the little home decor frames with the lines all because two people fell in love. And as I watched the love that flowed so strongly among my family last weekend at my sister's wedding, I asked myself because of which two people falling in love in the past made this all of our futures. Did it start with my Grandma and Grandpa Morgante and their fifty four years of marriage and four kids? With my Grandma and Grandpa Williams and their almost fifty years of marriage and six kids between them? Did it start with my parents who met on a blind date, saw each other a whole eight times over the span of a year and half because my dad was in the Marine Corp,  and then married. He  took my mom halfway across the country on a lifelong journey  that no one thought  would make it the first five years, much more the thirty two they're going to celebrate next month. I grew up believing in the love of a lifetime, the committment and strength of family, and that love is  everything. It is our strength, it is our weakness, it makes us laugh, it makes us cry, it gives us hope, it's there no matter what the world and life throws at us. And when you've found it, whether it's your sibling, parent, child,  spouse, or anyone else you hold it tight and never let go. I believe that love is the best way to honor the gift of life that God has given us. It is a gift that should be honored everyday.

And as I look at my parents and my grandparents, I am thankful everyday for such amazing people to have been placed in my life to show me the way. We lost one of my grandpas last summer and my other one has struggled for awhile now, and I always think how I hope I can look back on my life when I'm their age and feel that I did it. Just as they have. None of them are rolling in wealth which is sometimes what some thinks it means to "make it", and I know they had their moments of struggling with money and life just like the rest of us, but they kept their faith and they kept their love. They kept right on going no matter what life threw at them. And life threw some pretty nasty curves at times, but through it all they held strong. Life is hard, working for a living is hard, marriage is hard, raising kids is hard, but they all (my Grandma and Grandpa Williams, Grandma and Grandpa Morgante, and Mom and Dad) never gave up on each other and together showed not only me but I believe anyone that knows them that the love between two people can accomplish anything and that marriage can last.

My parents have been the constant guiding light in love and life. They really have been inspiration to all of us, and as I looked at my parents' growing family of 12 now, they might not think so but to be them at some point is really a dream so many of us hope to reach. And now that the three of us are married, I like to think my sisters and I got enough of their good strong genes and I know we married good men, that we all hopefully have the potential to follow in  their large footsteps. I know it s a long, tough road, but I'm sure every step down it is worth it. 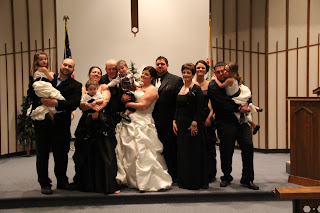 Posted by Stepping into Motherhood at 12:13 PM No comments:

Well Christmas has come and gone. As well as 2012! And now here we are into 2013. Christmas break was okay, but unfortunately my girls were sick the WHOLE break. Ave came down with a fever Saturday and it didn't go away until Christmas day, and on that same day Kenz started with the fever. But her's didn't go away in three days so come day 6, which was after the weekend, I finally got her into the doctor. And it turned out that she had a double ear infection. On top of that I can see that she's cutting her molars. So a sick, tooth cutting Kenzi was kind of like having the colicky Kenzi back so by the end of the day yesterday when I was on our third or fourth day of her just crying constantly  when she wasn't sleeping, I actually felt ready to go back to work. The night before going back to work, I of course felt guilty that I was so ready to go back because my own children drove me crazy. Averi with this three year old sassy, fitting throwing attitude of hers of late and Kenzi with her constant crying. We went sledding a little but not much because we figured they probably shouldn't be out in the cold if they were sick, and once we got home we heard from the seller's bank and finally have a close date so we of course wanted to take advantage of time off so packed some more of the house on top of putting away the Christmas decorations and gifts and unpacking from PA, which then made me feel like we didn't do any fun family stuff. That's the way I've felt all school year. We barely squeezed in the Pumpkin Patch in October when we got the approval from the bank and started looking at houses. We never did any fun Christmas outings like Zoolights from last year because Nate had class every Saturday in December this year and we have to save every penny for that large down payment. But it'll all be fine because we're getting something so much better that we didn't even think was going to happen this year or possibly for years (I'll share that whole journey when we've finally closed on the house). Once we're moved and settled in, we won't be so overwhelmed and distracted. It just bothers me that I am so distracted from giving my girls all the attention they should have. I doon't feel like we've had time for our usual crazy Glenn fun,but we will again. It'll just be in our new home in the country verse Baltimore City.

But we did have a good visit with Nate's family. The girls love seeing their Grandma, Nana, Uncle Bob, Aunt Jody, and cousins. And as always, it's nice to have the few extra hands for help for a few days. And they got TONS of gifts from them and us, as well as Santa of course. And we still have one more Christmas to go. We leave in less than a week for my sister's wedding. Can't believe my little sister is finally getting married. Now that it's right around the corner, I'm getting pretty excited for the trip. It amazes me though how many people ask me the question, "oh, you're going" like I wouldn't be going to my sister's wedding!!! Yes, people, I don't care if she was getting married in Alaska on the worst possible day of the year (not sure when exactly that would be) but she's my sister and just like every other significant life event that has occurred since I moved out here I will still be there. She fretted so much about when to have it between my schedule, hers, my dad's, and my mom's family. I pretty much told her it's your day, have it when and where you want, and we'll be there. That's just what family does. You don't always have to like it but you just do it because they're family and it's what you do. Had to get the short vent in there. Too many things have occurred lately in different ways where it amazes me how people don't make the time or the effort. 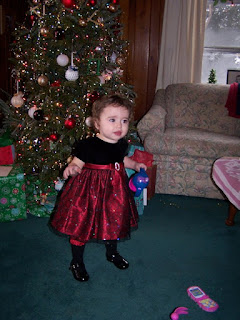 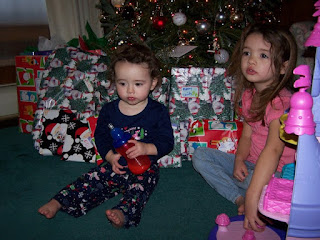 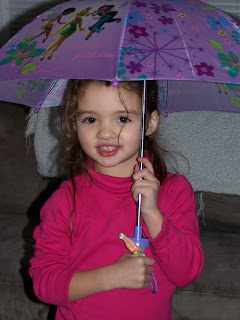 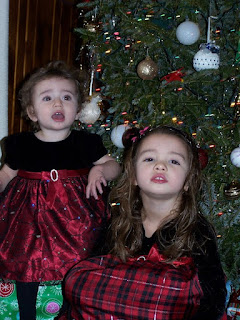 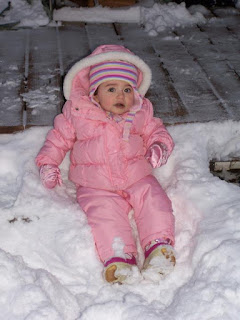 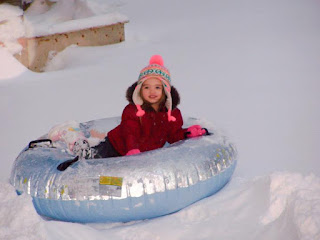 Averiella snowtubing down Nana's hill
So yes, I'm wound a little tight lately (don't really expect that to go away until like April though), but I have good feeling about 2013. Starting it off with Tam's wedding and time with my family and then getting ready to move in to our new house seems like a good way to start it off to me. Here are some fun Christmas pics of the girls. There's just something about little kids that just brings the magic of Christmas back. I have to say Christmas with a three and one year old has to be one of the more enjoyable ages. Kenzi was definitely more of a partcipant this year than she was last year at six weeks. We're excited for the new year here at the Glenns and wish everyone else a great year with many blessings.
Posted by Stepping into Motherhood at 10:31 PM No comments: