I love my kids but sometimes.....(You know you've thought about it)

I love my daughters more than anything. More than I ever imagined it possible to love someone. That being said however, sometimes, I wish it was acceptable to put small children in little cage  like thing like those dog cage things. If it's one of those large dog ones, there's plenty of room for even a four year old to move around, and if you know what type I'm talking about you know they can breathe and see. You know I am not the only parent that has felt this way. My husband and I can barely escape our children, and usually the only time to do so is to go to work. With other people's children!

So like about every other task we've had to tackle that would be great without children in tow, we dragged our children along with us to go car shopping. I don't like car shopping to start with because I stress about how much more money than I have budgeted that the salesman will talk me into spending. And maybe I have too high of expectations to expect my four year old and one year old to sit, sit still, for what feels like hours on end while we go through the whole process. This was to be Nate's car so I was in charge of "watching" the girls.

Here's how our evening car shopping with children went and why if it was acceptable to put small children in animal carriers I might have seriously considered it.

At first, they do their usual charming thing. Smiling and batting those long lashes at any one that will give them a moment's of attention. Then it started to go downhill. I said something to Kenz using the word flirt. But Averi thought I said the word fart. I don't know why but I hate the word fart. At that moment Kenzi learned a new word from her sister. All she wanted to say was the word fart and then because she'd see that I didn't want her to and kept telling her to be quiet, she'd just want to say it more and louder because she thought it was a game. Of course, Averi thought it was funny as all get out and just kept encouraging her. Muzzles too maybe?

Next we decided to go for a test drive. I made the mistake of sitting Kenzi behind the salesman rather than Nate. She kept wanting to bounce her legs and kick her feet, but she kept kicking the back of the seat. Again when I told her to stop she thought it was a game. It's amazing how many things you forget. At four Averi can understand the idea of consequences for behavior. I can threaten her in public and she knows if she doesn't correct herself she will have consequences, as well as rewards for being well behaved. I forgot how to manage a 20 month old who doesn't understand threats, bribes, and rewards yet, especially when they're not immediate.

Whatever demon came and possessed my 20 month old continued once we returned to the store. I always knew Kenz would be more of a temper tantrum thrower than Averi and even though she's not quite 2 yet I feel like I can already see the so called terrible 2s coming with her. She dumped water on the floor from my water bottle I let her have a drink out of so I took it back because she'd just keep spilling it. Out came the stomping two year old fit that as a parent you dread in the middle of the grocery store when you don't buy them something.

On top of that, Averi kept telling everyone we were having a baby brother! Why does she keep telling everyone she's having a baby brother?! I'm not even pregnant and if I were it's more likely to be another girl! Nate kept assuring everyone not anytime soon. And is every four year old like a freakin ping pong ball!  It's like she's possessed; she can't sit still. Hopping, rolling, bouncing, throwing her legs up, shaking her head, just all over the place.

Finally at like nine o clock we drive off with our new car and head to dinner. By this time I'm just a little tired. I had left the house at 7 and here it was at almost 10 and we were eating dinner. My mind is a little foggy so when Kenz looks like she needs entertaining I (again tired mommy here) hand her a fork. Okay, it's 10 o clock here give me a break! I could have given her the butter knife. Nate of course calls me out on my poor thinking and says to me "don't you write a parenting blog?" implying that I give parenting advice. I had to laugh at that. Parenting advice? From me? NO. As a teacher I maybe told parents they should read to their children, but aside from that I don't think I really give advice. I feel like I'm barely functioning above the sanity level half the time.

About eleven we're finally home. I'm exhausted and just want to pass out. And a freakin thunderstorm like no other starts erupting over the top of our house. Of course, no one, including the dog wanted to be anywhere but in the bed, on top of me.

At this point, forget the damn cage for the kids. Just put me in there and shove me in a dark closest where no one can find me for a while!

Don't let their cuteness fool you. 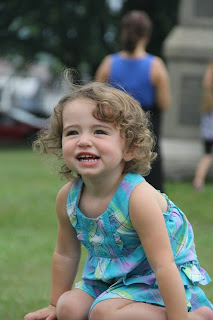 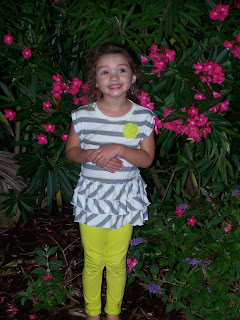 We need 3 likes to reach our first 100! Liking our Facebook page is a great and easy way to follow!

Posted by Stepping into Motherhood at 10:14 AM