I'm a month into being back to work. A month into conquering the new me, and I feel amazing. Maybe I use the word amazing because I know what it feels like to feel the complete opposite. I know what it’s like to feel defeated and like you keep getting kicked while you're down, which in all honesty is usually yourself tearing yourself down because you feel overwhelmed, like everything is never enough. I've had those moments here and there in the past month, but they've been short lived where before they've consumed me.

Sure it's been hectic busy at times. When is it not at this time of the year, but wow, my energy level has been a huge lifesaver. I can be pretty go go as it is, but I like my sleep, people. I do crash pretty hard by 10 almost every night, but I'm up at 530 after at least one middle of the night feeding with my son. It's go go go all day long until about 9, but I'm good. I got this in a way I haven’t in a long time. I'm not frustrated with it and taking it out on everyone in the house every night because believe me there was a time I was like that. In fact I did something tonight the old me would have never done. If I don't get my workout in shortly after work it's not going to happen. However at 8 after the baby went down and dinner was cleaned up I thought I'm not going to pass on that workout; I am going to get it in tonight right now. And I did. The old me would have fallen back on some excuse and pushed it off for another day.

Not only is my energy level higher but I even feel like my mind is more focused and not so foggy. My husband always claimed I must have adult ADD or I call it mommy brain. Even though I can be scattered brained here and there my head does not feel like there's a ping pong ball rattling around in there all the time like it used to feel like. I'm focused, I'm organized again, and I have my plan whether it's  about me and working out, work, or family activities and household responsibilities and I get it done. I’m feeling accomplished in a way I haven’t felt as a working mother possibly ever.

I'm a ball of positive energy that I have not been in a long time. My husband would probably tell you it was from sometime before we had kids, and he's probably right. But I worry when my mindset will slip, when the feelings of frustrations and being overwhelmed will consume me again. When will the ball drop?  Will that crazy, angry, negative girl come back? See depression runs in my family. If I ever sought the official medical diagnosis as my family has pushed me to do I would be the third in our family of five. Even though I did eventually seek medical attention for mine a few years ago besides discovering my thyroid issue I never pushed it any further because I have very strong feelings about being medicated. It took multiple blood tests before the doctor convinced me I really needed medication to get my thyroid under control.

However, when I saw the negative toll my negativity and anger had on my children and marriage, I knew I couldn't just hold onto my stubborn resistance. It was give in and seek anti depressant medications or change. So as anyone in my family can tell you I have quite the stubborn streak so I went for change.

It would take what I call a whole trifecta transformation: spiritual, mental, and physical change. I wanted a natural change. Even though I have always been a believer in God and said my prayers I started to add in a few prayers for myself. Because frankly I needed help. So oddly at first the idea of asking Him for help in becoming a better person was about like the thought of asking my parents for financial help. I’m independent and I can do everything myself is my attitude, but over the course of the past few years I really grew my relationship with God. I have no doubt He’s played a more active role in my life these past few years. I sought his help and He answered.

For the physical transformation I knew I needed exercise back in my life on a regular basis again. I'm not a beach body coach and heck I don't even follow the programs like I should, but I love the videos. Even though I’ve implemented multiple changes over the past few years to change my mindset and get here, I do believe they are key in the final results. All I've done is commit at least three days a week to the videos and cut soda and other sugars out of my life. I tackled my physical health with exercise which as I've always shared has had a huge mental health benefit to me. Seriously exercise is the greatest free therapy there is, people. It does amazing things not just for your body but for your mind too. I think the exercise and better eating habits have been huge for my increased energy level, positive mindset, and just clearer head.

There were so many changes I put into place in the years since I started to realize what my angry, negative attitude was doing to those around me but I really feel like it's been in the last few months that I've seen the final transformation of feeling that even though I'm not completely where I want to be I'm confident I'm on my way to her. I’m in such a better place physically, mentally, and spiritually than I’ve been in a long time. I think all three of those are key in transforming myself to a happier better me. It all started with knowing I had to change and taking action to make it happen. 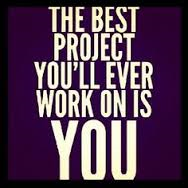 Posted by Stepping into Motherhood at 9:21 PM