Most people have probably heard the statistics that money is one of the top three reasons for failed marriages. I hate that money is important, but the truth is we all have to financially survive in this life. Unfortunately, money is one of those things that seems to be able to bring up or bring down so many things. I'm still convinced money does not equal happiness, but I do feel due to the hardships it brings it can at times lead you down some dark roads of unhappiness. We have definitely been there, and I can definitely understand why money puts a strain on marriages.

As we head into this November it will be 11 years since Nate and I first met and two years
since we moved into our house. As I look back on the eleven years it's definitely been a struggle with last two, more so last year,  being the financially hardest. Luckily in many ways those struggles have been connected to financial survival more so than any physical or health concerns. I always like to say money problems are the best problems to have because to me the alternative is health problems and in many ways that is much scarier. But the stress that comes with financial struggle can mentally wear you down and have a negative effect on a person physically.

When I met my husband he was not in the greatest financial situation. I'm sure most of us have read those articles about what we should know about someone before dating them, and it stresses their financial history because I guess it insinuates something about them. I took that to mean I was the one that should be in control of our finances. In many relationships there is one person that is the household finance guru and in our case that has always been me.

However, here are some common problems I've found not just from my own experience but in speaking with other couples. The one in charge of the money feels a great weight on their shoulder to not only pay the bills but the responsibility if things aren't going well then it is somehow all their fault and they've failed in a major way. They also feel whether they're the one that makes more money or not that it's up to them to cover the deficits. The one who isn't in charge of the money feels like they contribute but have no control over how it's spent or faces guilt or criticism for wanting to indulge on something so it never feels like the money earned was ever theirs. This creates hostility, tension, and hurt feelings on both sides.

Him and I have dealt with this for years, but when you're barely financially making it, and you're both already picking up extra work to cover your expenses,  you're afraid to change much for fear what little grip you have left on the situation will be gone.

Finally all the extra income from jobs on top of our full times jobs we have picked up over the years was going to be extra money this school year so with a little bit of breathing room, we seperated our money. I know they say it shouldn't be his and hers; what's his is hers and vice versa, but this has been great. The way we do it now is he writes me a check each pay period for what I need for our joint household bills, and I still manage the household budget and schedule the bills; however, we each take care of our own school loans, credit cards, and car loans and managing our spending money, gas money, and savings is on each of us.  I do factor in savings for first Christmas and then summer as part of that joint household bill amount. We have both found this so much better. We even bank at different banks, and I've even come to learn from a past experience that this is also better. Before we had our accounts linked and within a month I was still managing his bill payments and then because they were linked I able to easily borrow money so it was still the controlling and lack of controlling situation.

Marriage is a team effort and everything is meant to be shared, but for us I have found the his and hers money a relief to some of the financial stress on our relationship. I don't know if it is something that would work for everyone, but I do know others, including my parents, who have survived off this method for almost 34 years of marriage. 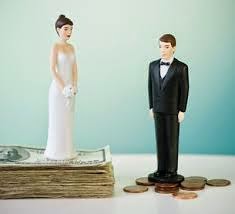 I talk about marriage more in my book, Moms, Monsters, Media & Margaritas, It's avaliable in print for $10 with 20% off with code OKTOBER.  The book is also now available on the Amazon kindle for $3.99 and the Barnes and Noble Nook for $4.99. With the purchase of print and ebook books 20% of sales goes towards a children's charity for the The PACI Fund Project. This Fall donations are going to the Families of SMA charity.


Posted by Stepping into Motherhood at 1:14 PM