Life with Too Dang Much Snow

I kind of listen to the weathermen's reports about the way I listen to any other media source's information. I try not to get too caught up in the hype and drama because at times they tend to overexaggerate for the point of ratings rather than accuracy. We've had an incredibly mild winter so far in Maryland so when they started talking the first significant snow of the season being a big one, I not only was doubtful but wasn't really too psyched about the idea of a big snowstorm like I normally would be.

The mild winter combined with a new baby for this spring and summer had my sights set on an early summer rather than snow days this year. But I did stop by the store on our way home Thursday to pick up a few essentials in case we were on  house arrest for the weekend.

And holy wow the weather people did not lie. In fact maybe they underestimated this winter storm. Or I really didn't pay close attention to the news reports. For all those that said they were jealous or lucky us for getting so much snow- ten inches, maybe even a foot of snow, is yes fun. And it can get you out of work for a day. It's pretty for a day or so and all that nice stuff we like to associate with snow. But 30+ inches is just ridiculous!

You in some cases  cannot literally get out of your house because the snow is packed in against your door. Your car if not in a garage is buried. BURIED, I say. Like you can maybe see the mirrors and that's it. Do you know how long it takes to not only clear your car off but then shovel all the snow packed in around it? If you didn't go to the store, didn't plan your grocery trip so well, or were too late for the last loaf of bread and gallon of milk you're going without for days because in some cases even if you get your car unburied who knows how long it will be before a plow plows your street. And if you live somewhere where you park on the street, your car will be repacked in when that plow finally comes through. In which case you get to spend hours digging it out again. Do you know how hard it is to walk in this stuff? I call bullshit for whoever claims they walked to school in knee deep snow back in the day. It would take days to get there! And if they're like my kid they must have done it barefoot because I can't even count how many times we had to dig through the snow to find a snowboot that fell off while her little red foot just hung out there in the freezing snow.

Thankfully it didn't seem like there were too many power outages this time, which is not always the case with big storms like this. For us personally we fared pretty well. We didn't run out of eggs until this morning, we're now down to our last few slices of bread, we opened our last gallon of milk this morning, I unfortunately forgot to pick up my beloved weekend morning drink of choice OJ so had to do without, but still have plenty of water and ended up eating some good meals at home for dinner with homemade pizza, chicken chili, and enchiladas. And we did get our truck out today! After my husband attempted yesterday and slid it into our front yard in front of our bay window in which case it was pretty solidly stuck considering about another foot probably fell after he did that. Today after my husband and two other neighbor guys shoveled out the plow truck (yes, even the plow truck was stuck in this stuff at the bottom of our street for about an hour) they all worked together helping other neighbors and each other get unburied.  My kids went out today before 11 and besides coming in for maybe an hour for lunch were out there until almost dark at 530 playing in it so yes, I'm sure they found it fun. Now here it is 7:30 and we're all ready for bed, including the dog, which had a blast in the snow as well.

Here's so pics of their fun and way too much snow. 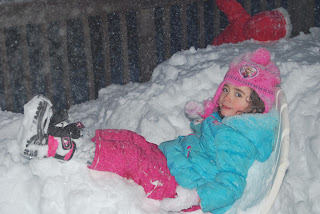 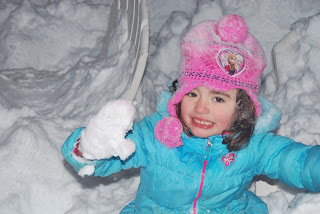 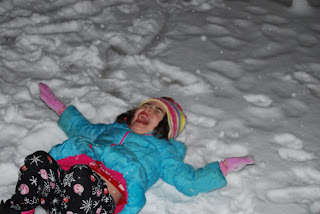 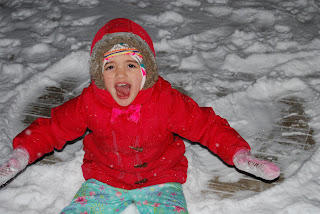 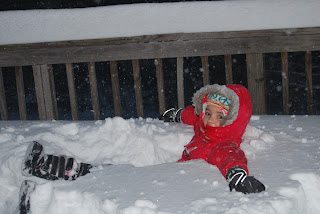 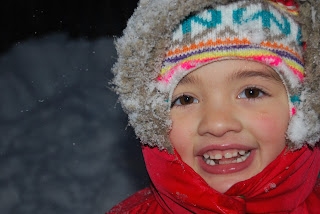 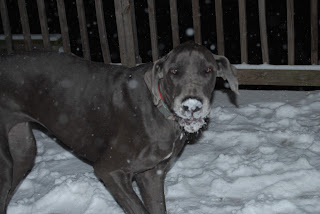 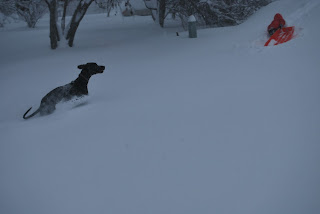 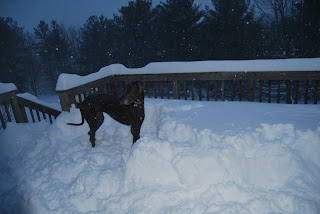 This is the truck a little over halfway through the storm

My car is there somewhere 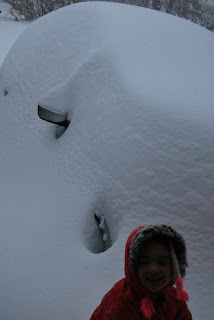 Posted by Stepping into Motherhood at 7:52 PM