Five weeks into life with a newborn/infant for the third and I'm pretty sure (even more sure than before) the final time I'm kind of wondering if I'm just not very good at the baby mom thing. I always joked that I wanted my last kid to be born at age 2, but there was a sense of desperation to that unrealistic hope.

Sometimes I just think I'm not cut out for mothering the completely dependent. I'm always trying to do too many things at one time and infants rarely even let you do one thing at a time. I can't sit still for very long unless I'm working on something that requires sitting (or chatting on Facebook or phone) and infants want you to just sit and hold them for hours on end. Now with two other kids I can't even sit long enough to pee without one of them needing something it seems like. Then there's the lack of sleep.

I'm going on five weeks of no more than three hours at a time of sleep; sometimes I think with a maximum of three hours of a sleep a night with a bit of dozing for the rest of the night. I thank God for my rebounded energy level of the past year or so because I'm not sure how I'd function otherwise. Honestly, even with little sleep I really don't feel that exhausted; otherwise I would have probably snuck in more than just a few naps in the past five weeks. My mood has been pretty positive for the most part, but the baby's constant crying some days of late is starting to wear on me.

Some days I feel like he just cries ALL day. Other days like yesterday he seems pretty content. Then of course there's all the input from everyone from my mom, to my sister, to my husband on what to do about it. "He needs to cry it out.", " Your baby is crying! Are you going to pick him up?", "I think something isn't right. He shouldn't cry that much.", "It's your milk. You should just quit breastfeeding and use formula." At one point in the past week I just wanted to put my hands over my ears like a toddler to block them all out. There's the unstated assumption like I should know what to do to fix it, fix him. I don't know. Babies cry. That is normal.

God love them all, but in the end it all comes to mom. Not to take anything away from dads (as my girls are now huge daddy's girls) or family and their willingness to help, but an infant's needs fall to mom. Sometimes it seems like I'm the only one that can calm him down. My second was like this for the first several months as well. Again I was the only one that knew how to deal with her. My husband is pretty good about picking up on my breaking points most of the time this third time around and will cut in to help before I explode but unfortunately he  really can't get what it's like to be mom. I would love to just think I could disappear downstairs because the game is on or I've helped out for a few hours to give some relief  so now I can go do my thing. But my disappearing is "deal with the crying baby so I can shower, do the dishes, or get outside usually with the girls for a long walk."

I don't say this to be mean. I say it as the reality of being the mom. It s mentally exhausting sometimes. Some days it's just hard to be the mom. On days like today when the baby fusses all day I know I'm getting to my wit's end. I hate how I get impatient with my youngest daughter who I usually try to be more patient with. And then I pick fights with my husband over bologna. No joke. Literally bologna. And I just end up frustrated.

I'm frustrated with feeling impatient with the girls, frustrated that I don't get any quality time with my husband and pick fights over stupid stuff like bologna (which now is kind of funny), frustrated that I don't understand why the baby has good days like yesterday where he seems content and days like today where he rarely sleeps and just eats and cries all day. On top of it we have his first set of follow up appointments coming up with his neurologist and cardiologist in the next two weeks so that combined with his fussiness of the past two weeks gives me a bit of anxiety.

I swear after knowing what I felt like after I had  Kenzi with this whole messed up thyroid/depression thing and the anxiety of this pregnancy with his diagnosis concerns I've been feeling pretty well mentally/ emotionally. I've just had a few too many rough days lately. I'm a veteran mom here this time around. I know there are easy days and there are hard days. And I know I can't let the hard ones get me down and need to regroup so I took an hour walk today, got a few minutes of quiet in the shower, and now got to sit here in the quiet dark and vent/write. Tomorrow will be a better day. Prayers for Lincoln and my mental state (for my family's sake) are always welcomed though.

Here's my handsome little guy at one month already. 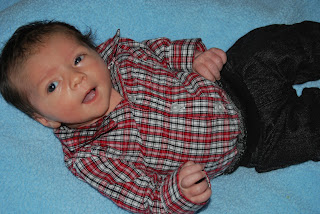 Posted by Stepping into Motherhood at 10:41 PM