The Fork in the Road

In my last post How Did We Get Here I looked back at the uncertain and doubtful moments we've had in the last thirteen years of our family journey to here where we are now and I hinted that we're once again facing an uncertain moment. Last week my husband found out the job he's been doing for the past two years that he's loved in a school he's loved under a supervisor he's loved was cut due to next year's school budget. He's also been in our school district's AP pool for about a year now and is still in that pool until Sept of 2018; however, unless he was transferred into an AP position he was really hoping to stay right where he was though it was a short term position created when he took the job to begin with. His principal is really hoping he'll get an AP position for next school year; however, even as much as her and other Title I supervisors of his has given him positive references he just keeps getting silence on the other end of his inquiries. We've also figured out from him trying to apply out of district and even out of state is no one is going to take someone from a teaching position (though he's been in leadership positions like this Title I program the past two years) to an AP position. Positions outside the district want him to come in as a teacher, go through their hoops, to then move into a AP position after he's already done a bunch of hoop jumping here the past three years so the thought of starting that process over somewhere else is just very discouraging. For right now he has a good five months though to heavily pursue AP positions in our school system, if openings ever start popping up.

Even though so many other teachers I have spoken to from ones in my school, others in our district but other schools, and even teacher friends in other parts of the country have validated my feelings of frustration with this position of late it is also sad that at times that's the only thing that makes me feel better about staying the course in this profession at times. This job creates a lot of anxiety. Anxiety where you can't sleep at night because you're wondering what kind of confrontational battle you're going to get into the next day, and you wonder if this time it's coming from a student, a parent, or a supervisor. Too frequently you feel on the defense of being attacked. It is an emotionally abusive job and some teachers will even tell you a physically abusive job, and unfortunately as others have validated for me it is similar to being in a toxic relationship at times. I have just really struggled this year and as I posted in my post Career Change I have also been researching a career change, but I also know rough years are usually followed by better years. Last year I had my best year ever in thirteen years of teaching, but on the other hand I have pretty strong feelings of disagreement with where our school district is headed with their recent changes. I feel that it's a huge disservice to the kids and their future. I have a hard time being a part of something I don't believe in.  The thought of doing the same thing for 30-35 years of your life just seems so uneventful as well, and I also know I took the position I'm currently in  three years ago that I only planned on being in temporary to begin with due to its distance from home. But even as much as we've tackled change, and both Nate and I have worked in five different schools in our thirteen years change is still hard. Obviously at the minimum we're both going to be changing schools in the next year or two. I already have my assignment in the same school for next year so unless I get an offer to try out middle school like I've wanted, to try out this different position (that would require an added endorsement to my certificate) I spoke to HR about the other day, or happen to get an offer into the school district where we live I will stay another year in my current position. I have a good five months to pursue those three options though.


So on one hand we're both happening for some big change in our current career path. It needs to happen for next school year or the following year at the latest. Due to the budget cuts that eliminated Nate's current job though we now feel an urgency for that change to happen for this coming year. However, due to our current frustrations we've started looking into the path my husband has wanted to pursue since he left home at 18 and went to culinary arts school. We've started looking at and inquiring about turn key restaurants for sale, have started speaking to a business lender, and have started brainstorming our "business plans" for our Winging It restaurant that's been our dream board for years but never went past the back of our minds, and now comes the part I've been mentally doing for two weeks now weighing the pros and cons of one path verse the other. So the teacher graphic organizer below is for our benefit but maybe you from the outside looking in will have something add.

-own boss
-creating and seeing a vision become a reality
-established business to hand down to our kids if they want it
-rarely have to ever cook dinner again/lower home grocery cost??
-no commute
-I'll have more time "off" at home with the kids because I'll either work PT for insurance or not at all depending on location (Con for Nate though because he will be working all the time)
-moving (con too) but we would have our home in the same community as the restaurant and though I love our current community I also like the excitement of reestablishing yourself in a new place and if we left here the cost of living is almost lower in every other place we're looking at moving to
-closer to family (due to the con of time we're leaning towards being within an hour of one of our families for help with the business as well as the kids as well as eliminating the need to travel to see one family)
-vacation whenever (I could take the kids to go see my family whenever but it'd be a few years before Nate could probably leave for a week though I suggested closing Christmas week and having a strong manager and kitchen manager in place within two years so he could take time off for family)
-teach our kids valuable lessons (elaborated on below)

Restaurant Cons
-time (a huge one) as it'll interfer in our family life on the evenings and weekends as well as     eliminate time for our beloved traveling for pleasure and seeing extended family
-moving (con more so for the kids particularly the oldest who I think would have a hard time at first leaving her friends and starting a new school)
-money and insurance (based on the ##s I've been looking at with established places I think in a few years we would be fine and back to where we currently are, but my biggest personal financial concern is insurance which if I could find a job that let me work PT and have insurance for the family- like I would be able to do in my current school district-then this wouldn't be much of a con. Also want to have more $$ saved before we did this which I think we could have in 1-2 years and for sure with the selling of our house if we were moving)
-retirement????

Education Cons
- the emotional drain on our mental health
-commute
-dictated vacation times
-missing job satisfaction at the moment (which is and has always been huge to me. I'm a strong believer in we spend too much time at work to not be happy at work)


As we've discussed where we're at with some we encounter some who admire our willingness to chase change and reinvent our lives; others will call us absolutely crazy and think we've lost our minds. Honestly with some of the things we've done in the past that's not anything new to us. Calling us crazy almost makes us want to do the "crazy" more.  Some will say we have no idea what we're setting ourselves up for, and I don't really know if I have a counterargument for that. How do we ever know until we try the unknown?  Some will cheer us on; others will hope for our failure. Some will say the grass isn't always greener on the other side; but our expectations isn't for it to be greener but for it to be a different experience with it's own benefits and disadvantages.

The safer path is to obviously stay the course in education. That may be what we do. What happens in the next five months may make that the greater possibility. If little changes between now and about 18 months from now then trying a new adventure may be the new path, which is why we're doing our research, saving our money now, and talking to lenders because I don't think we'd jump ship this summer but I think we want to be ready to jump ship next summer if this path appears to reach a dead end. I hate uncertainty; I'm a planner. I like to know what's coming; what we're doing. For now I guess I have to watch the plot twists of our story unfold and see where it takes us. Wish us luck! 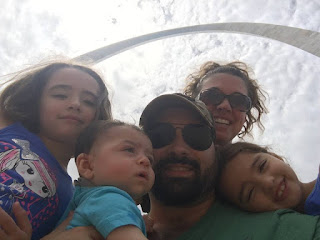 Posted by Stepping into Motherhood at 11:03 AM