Gender Equality Between the Sexes???


When it comes to gender equality or the existence of inequality still in today's society there are many arguments about whether there is still inequality and in what ways that inequality still exists. It's 2018; women have had the right to vote for almost a hundred years, the laws of today say we're equal so where's the inequality some like to ask??

My students and I actually had an interesting conversation about this when we read Sojourner Truth's Ain't I a Woman.  A student pointed out that the argument about the issues of equality isn't about our laws. Our laws state equality, but our social expectations and behaviors is where inequality is still alive and well. We also talked about how with Emma Watson's Equality is Your Issue Too that feminism is not just about women but about these misleading social expectations and behaviors we as a society project onto both men and women. I've heard the arguments against the existence of gender inequality in today's society but here me out for a moment on the ways inequality still exist when it comes to our 21st century social norms, expectations, and behaviors. I'm not even going to touch on political issues; these are every day ways any of us- men and women- could still experience gender inequality.

I only have my own experiences to speak from here and though neither my father nor my husband have ever made me feel oppressed because I'm a woman, there are interesting things I've taken note of lately about inequality when it comes to our behaviors and expectations. Maybe there are some here you’ve seen firsthand for yourself. Again, this isn't just about women but also how men face it themselves and if you have not read Emma Watson's Equality is Your Issue Too check it out or watch the video.

1.The unspoken social expectation that men pay and are the ones making the financial decisions:

Both when dealing with the sales people for the estimate on our bathroom remodel this summer and in shopping for a car for me, I found it quite annoying that the salesman tended to direct his questions and information to my husband over me, even after my husband said I was the one making the final financial decisions in both situations. It’s not like either was rude, but I think it’s just one of those social habits the same way handing the dinner tab over to the man rather than the woman is. As a woman who manages our family’s finances the unspoken expectation that men are in control of the finances drives me crazy. It’s not fair to men either to have the expectation that they should be the one paying for dinner or anything and everything for that matter. Maybe on a first date it’s a gentlemanly thing to do, but I’ve also seen girls that bum drinks off guys in a bar because of this ridiculous notion that men should financially pay for women. So the financial expectation that it’s a man's responsibility and women are incapable of handling  finances or financial decisions is a social norm we still need to work on.


2. The idea of one gender or the other being incapable because that’s just the way “men” or “women” are:

The thing that has killed me lately with this is that some of the recent things told me have come from other older generational women such as the expectation that I should take care of scheduling something for him “because he’s a man”.  Ummm, no he’s very capable of taking care of himself and it’s rather insulting to him probably to suggest that he’s not capable. Or that I can’t do something because “I’m a woman and my husband won’t let me.” I’m a grown woman and my husband actually respects me to make my own decisions and would be the last person to tell me what I can and cannot do just because I’m a woman. Men are not incapable of taking care of tasks that have in past generations  befallen on women, and women are not incapable of doing things on their own that they once had to have a male escort to do. Both are quite independent.

3. Telling a woman she can't do something with her children that her husband could do because she's a woman and it's not safe:

It is unfortunately unfair that there is even some level of truth to this. As a parent of daughters I often wonder how often we will use this concern for their safety against the threat of men from preventing our daughters from doing something, yet we'll allow our son to do it. This is where as a society we must do a better job of raising our sons and in teaching our daughters how to be safe and cautious of their surroundings and situations in order to be capable of handling themselves in an unfavorable situation they may find themselves in.

Chaunie Brusie wrote this great piece for Babble  on how even as mothers with sons and daughters we tend to ask and expect our daughters to help out more around the house than our sons. Now in both her and my defense our sons followed after two older sisters so maybe if our sons were the first born we wouldn't have to more subconsciously make sure we're expecting the same out of our boys around the house that we are of our girls.As a woman that works out of the home as much as my husband I expect and he does contribute around the house as much as I do so therefore our sons should be held to the same expectations around the house as his sisters. There is no "the house is the woman's responsibility" around here. Now when there are large yard projects there are times he tackles the outside while I tackle inside but we're both helping and going with the projects we'd each prefer to tackle. When I am home in the summer and he's working I do try to get most of our housework done during the day while he's gone so both of us can have more restful evenings and weekends. We both cook, we both clean up, we both work on laundry, though he tends to tackle the outdoor work and I tend to do more of the actual house cleaning we've both pitched in on those when needed.  When I surveyed a group of moms online it was refreshing to see that for the most part it was similar experience in their modern day lives too with their husbands. The days of husband coming home after work and watching TV all night are over, but so are the days of mom being home all afternoon watching her soaps. When it comes to social expectations and norms I actually feel like from my childhood to my experiences now this is one of the things that has made the greatest gains. Equality when it comes to husband and wife and the running of the household will look different for every family but the important thing is that it's an agreed balance in whatever designation of who's responsible for what looks like for each family.


5. That the care of the children are primarily the woman’s responsibility:

Trust me I get it that mom tends to be the default parent. How often do kids walk right past dad next to the fridge to ask mom for milk in the next room? But men are just as capable and in many cases do as much care taking of their children as mom. My husband deals with the getting them ready and out the door every morning by himself, he knows how to change diapers quite well, he’s gotten up with them in the night, he’s taken them on his own to doctor’s appointment. And to act like “wow, you came to the store with the kids by yourself without your wife” is a compliment is actually insulting, insinuating that they are not capable of being the primary caretaker of their children when in fact they can be. This is where I feel men get hit with the negative side of flawed gender expectations in our society.

It’s interesting to me that women tend to battle with meeting perfection and have a higher case of mental disorders and attempted suicides than men.  I tend to believe because there is this social message out there that we’re not good enough. We’re not skinny or pretty enough because we don’t measure up to some absurd image of perfection that is posted all over magazines and the internet.  As women if the house or kids aren't taken care of a certain way then the blame falls at our feet because the expectation is those things are our responsibilities over the man's, but if he falls short it's "well, at least you tried or that's more than what some do" and he is excused. There is this impossible expectation that women need to do it all today with career and home, but not nearly as much social pressure for a man to meet these higher expectations of performance (not saying there's not the expectation in our own individual homes but it's not there socially for men to the same regard as it is to women). If a woman stays home she's criticized in one regard, yet if she works she's criticized in another. Yes, we could definitely make the connection that the same negative image is projected onto men that stay home because again to think it's acceptable for a woman to stay home with the kids and not the man, is feeding into those gender stereotypes that feed the reality of the inequality we still face.

7. Excusing boys behavior because "they re boys":

As a mother to a son and a son who is my youngest child at that, I have to really self consciously train myself not to set this trap for him. I can’t excuse his inability to follow directions, for being too rough, for lacking a sense of responsibility and contribution to things around the house because “he’s the boy”.  We can't have the expectation that girls need to be quiet and obey, but excuse our boys from this "because they're boys". It's not right to either gender.

As a mother of a son and daughters, I am suddenly taking stock of how these social habits creep their way into my parenting because they do. If I don't self consciously check myself I continue to feed these unfair social norms to my daughters and son. Making change with these habits and expectations starts with how we treat our sons and daughters and husbands and wives in our own homes.  With not even touching on the political issues of equal pay or reproductive rights and women's health, these are gender issues that are still in need of correcting and change in our modern day 21st century society so when people say they're feminist or for gender equality there is still definitely progress to be made. 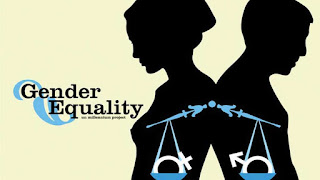 Posted by Stepping into Motherhood at 2:11 PM