A recall of Averi stories

I have a rare, and I mean rare moment at the moment, where both of my girls are sleeping so thought I would actually update some things on here. I say rare because the only time my oldest sleeps is pretty much when we are sleeping as well. Most of the time she doesn't finally fall asleep for the nigh until we do. She goes to bed before us but she's up every 15-30 minutes it seems like until we go to bed in which we just let her crawl into our bed cause otherwise she's Averi and who knows what kind of mischief she can get into while we're sleeping. On the rare occassion that she does fall asleep for a nap like last week when I was sick and could have really used a nap myself, Kenzi was wide awake and she's not quite the independent baby that Averi was. She wants someone to play and entertain her. I should be working on trying to figure out how to unclog our bathroom sink from the latest Averi mishap but I think that's going to be a daddy job. For some reason she thought it made sense I guess to shove toilet paper down the bathroom sink. And then to top it off I caught her, along with her partner in crime, a friend's son, washing their hands in the tiolet!!! For those that know my daughter, this is just another Averi incident. Averi, as I tell people, is not a bad child. In fact, I like to think most of the time she is a well behaved child. She has a occassional defiant, annoying three year old moments. She is a very loving child, almost always willing to share and make a friend, always willing to help when asked, and for the most part will do things when she's told, and aside from the one time I carried her out of the store kicking and screaming because I said no to buying a lufa of all things, she never throws fits when she's told no. She may pout a little but that's about it.

But she's Averi. What do I mean "but it's Averi"? I don't know if I know where to start and I'm sure I'll miss many incidents that hopefully those that can recall the Averi stories will remind me so I can add them to share with her one day. I guess I start to notice she was a mischievous child at about fifteen months or so when she would not only crawl out of her crib, but I would double baby gate her room with one gate on top of another and someone she was still getting out of her room. Turns out, she would pull herself up to the window that was cut in the wall between her room and the spare room on the other side and flip herself through the window to land on the spare bed in order to get of her room. She once sat on the floor and literally colored my dog and he sat there and let her. He was blue and red for awhile before it finally all washed off.  She has moments like the following story:


There are times when you let your kid do things at home cause it seems okay then but then out in public you realize oh, no. First, because her sister was crying while the doctor was checking her out, she grabbed Kenz's feet and yanked her away from the doctor. Second, I really wish Chipolte didn't have to play such tempting music that she thought it necessary to get up and dance while eating her dinner. Third, marching with the thing from Kenzi's stroller like a baton through the grocery store isle isn't such a good idea when you keep accidently hitting people and knocking things off the shelf. She was once pretending to be a dog like Bettis and just like he tries to catch flies, she once a bug off the screen door. She has drank and washed her hair, not her hands but her hair,  more times than I can count in the dog's water bowl. When she was still in diapers, she once chased her cousin who was a little younger and  in a diapers down to take off her diaper and was halfway through "changing her" before us adults stepped in. The two times she has been sick she threw up at her sister's feet, barely missing puking all over her and unfortunately the first time I was not so lucky as she threw up in my hair and down my back. Now, that's a parenting experience you never forget. She went through this phrase where she would give us passionate kisses because that's how the princesses kiss on TV. I think we've broken that habit before preschool. You really have to know her to appreciate the crazy humor she brings to life. There are so many more stories I know I've shared about her. Any more that anyone else can remember would be great so we don't forget to share them with her when she's older and we want to embarrass her. 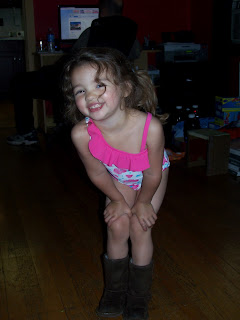 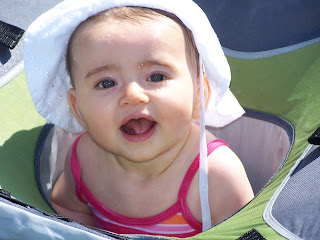 As for Kenzi. She's doing pretty good. Unfortunately she has a nose that I swear never stops running. I'm really starting to wonder if she has allergies. One of the concerns of a friend of mine that's getting ready to have her second child was worried about her first child not getting the attention that he needs or wants when the baby comes. I always feel the opposite. I worry that poor Kenzi is deprived of attention because of all the attention Averi gets. Hopefully she's not. At this age they both need attention for different things. Kenzi gets irratated with Averi some times but most of the time it's Averi's attention more so than adults she wants anyway. I love, love. love watching this special bond they're developing as sisters. I wanted Averi, still want Averi, to quit growing so fast. But with Kenz I can't wait until she's a little older and can play and interact with Averi on the same level.  Every now and then I encounter sisters that don't have a very good relationship or that special bond that I feel I share with my sisters, and I hope everyday that they have that more than sisters but best friends relationship that is so special that sisters can have.

Posted by Stepping into Motherhood at 7:17 PM