I don't even know where to start this post so warning that I'll probably be all over the place. Mine and Nate's first Christmas together he got me Bettis, a six week old weimaraner. Our family story kind of begins with him. Six months later on this very same weekend, Father's Day weekend, the three of us were set to head out on this new life adventure we imagined. Unfortunately, though it began with an accident that left Bettis crippled for the rest of his life. For the most part you wouldn't know he was crippled though. You could kind of notice because when Nate and I would take him to parks or out and about with us we got tired of people saying, "Your dog is hurt" or "Is your dog okay".

Three good legs or not though that didn't slow him down. I remember on this very same Sunday night ten years ago, I cried myself to sleep, partly because my dog at only six months old was now injured for life and because I was scared to death to leave with only him and Nate. He's been on this journey to home the whole way through these ten years. He's traveled across the country with us numerous times, he's been on every camping trip we've taken to either the mountains or the beach, he's hiked miles with us, we've spent hours playing fetch in parks and any water we could find, and one of our favorite memories with him was the three down canoe trip down the Clarion River. Three times we thought we were going to lose him. Once on that Clarion River when the current started taking him away faster than we could get to him, once on a Fourth of July night when he ran off to hide in fear of the fireworks, and the one time he disappeared for a solid week in which we posted posters and online ads in a desperate search of him. Because of his limpy walk he was taken to a shelter for a vet to see him almost thirty minutes away. He was there when we bought our first house and all the work we did to make it ours, he went back across country again when we got married, he was there when we brought both of our babies home, he was there when we made the move to our "possible home forever" house. Just as this last year with him has been rough to watch his health decline, it was also oddly the year that I came to see Maryland and where we are as home. This year seemed to mark the point of so much of what Nate and I imagined ten years ago coming to be the reality we once hoped for.

I always believe there's meaning in the way things happen. On this special ten year anniversary we said good bye to the best dog we could have ever hoped to have. Because you were  that constant companion that loved us both no matter what even in the moments we probably didn't even like each other and saw us through on this journey  home to where we are now, we brought you home with us today and buried you in the backyard. I hope you felt as loved by us as we always felt by you. You always seemed to be part human or a little more than a normal dog. Camping and PA just won't be the same without you this summer, buddy.  You were such a huge part of us, Bettis, and I hope you know you will always and forever be an important part of the Glenn family story. 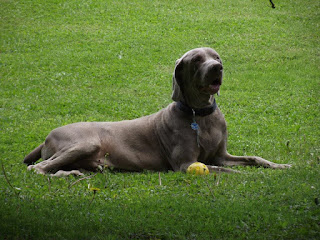 Posted by Stepping into Motherhood at 7:08 PM