When it All Comes Down

There are days I can write you this beautiful story of motherhood; there are moments my life does feel as picture perfect as it seems, but then there are other days. There are days we are making it. As mothers we are on it, the balls are perfectly juggled, and we feel like the superwomen that we are. There are days we fake it until we make it. It's not pretty but we get the job done. Then there are days we can't even fake it. We max out on our capabilities; we hit the wall and the crash is shattering to our sense of self. That perfectly constructed mask that was hiding our fake it until we make it shatters at our feet and the truth of what we're really capable of is bared to all in an honesty others will either judge or relate to.

On one hand I want to pretend this past month or so never happened, but on the other I know I owe it to myself, to my daughters who may one day find themselves in a similar situation, and to you-the women and mothers that have come to expect and appreciate my honesty. Unfortunately, too often we find ourselves in a dark corner we're unsure how to escape at first. Somewhere between mid September and mid October I backed myself into a dark corner I didn't even realize at first I was in until I felt trapped and helpless in an odd way I've never encountered before.

I came back to this working mom gig high on positivity in mid August ready to tackle the year head on. I was going from before sun up at 5:30 am until past sundown around 9:30 pm and even the hours in between 930 pm and 530 am with a baby that was waking up 2 to 3 times a night. My husband would complain that I never came downstairs anymore to watch a show. I couldn't. By the time I tackled that teacher, mom, housekeeper list there was no time left but to crash if I wanted a few straight hours of sleep before the baby woke me up again and again throughout the night. But it was okay. I was rocking this. It's like I was high on adrenaline at first or something. I wasn't sleeping but I wasn't tired. Besides my thirty minute workouts with a girl or two at my feet and sometimes an infant on my belly while I did crunches I wasn't squeezing in much time for me, but it was okay. I was like the energizer bunny.

But I should have known. I'm up then I'm down. I should have seen the crash coming. But somehow it all still blindsided me.  Let me tell you. It laid me out in a way I've never experienced before. Not only did things start crumbling and falling apart at work, not only was I dropping the ball at home and fighting with my husband, but it felt like it all eventually just came down in a epic figurative crash. Whenever my moods switch from the highs to the lows anger is usually the emotion that manifests itself the most. It was there but nothing compared to the tears and the sadness and hopelessness I experienced this past month. It was the most awful feeling ever. I wanted to quit everything. I wanted to quit my job, quit our life here and go home. Everything we had worked for over the past ten plus years I was ready to just walk away from it all.  I had never felt so overwhelmed that me, miss overplanner and organizer, had no idea where to start. I didn't even want to start. I just wanted to curl into a ball and lock out the world and all sense of responsibilities. Making lists to organize everything put me in a panic mode because it just seemed like there was no way I could do it all.  I remember crying on my way out of Wal mart and thinking the only thing worse than feeling like this would be the pain of losing someone you love. Then I thought it is like I lost myself but I'm still here to mourn my own loss. I couldn't handle it all. The disappointment in myself at realizing I had reached my own limits left me feeling just as hopeless as the daunting tasks that lay ahead of me.

Why couldn't I cope this time? Why couldn't I manage all the balls this time? Even enough to just fake it until I made it? I had been a working mom for seven years. I had coached and finished grad school on top of working full time when my oldest was a baby, I had taught a college course two nights a week when my second was a baby, and now finally with the third baby we could financially make it that I didn't need to pick up those extra commitments and I was more overwhelmed than all those times before. What was wrong with me? Not only were my emotions consuming me in a different way than I was use to but even with the baby finally sleeping through the night I couldn't sleep through the night and often found myself awake from 2 or 3 in the morning on, and as great as I had been about working on losing weight four of the last five pounds dropped off in a week from a complete loss of appetite because my stomach was too tied in knots to even think about eating food.

After a month of everything unraveling like a dropped ball of yarn I just lost it in the middle of the day. I couldn't take the frustrations, helplessness, constant crying, and overwhelming emotions that felt like a tidal wave consuming me lately and found myself in the OB office undergoing a post partum depression screening. It appeared I had moderately severe post partum depression. "It's not the baby necessarily though," I said. I loved my baby. I had waited and prayed for him for over two years. Yet I was only spending two hours a night with him; I needed that break from the crying that followed a day of kids that all needed something from me throughout the day so too often I felt guilty for counting down until I could send him off to bed.  I had quit breastfeeding as it was just one more task I couldn't keep up with, and with him being the last baby saying good bye to that bond saddened me more than it did with the other two. Wasn't post partum depression about not loving your baby? I loved my baby; he was my baby boy I didn't know I always wanted.

Yet I knew I could not tolerate his neediness now that I was back at work the same way I did all spring and summer when I had all the time in the world. His high pitch scream grated on my last nerve lately. Somewhere between the increased demands of work which everyone was feeling not just me, the demands of a house after being gone ten hours a day, the disruption of staying on top of everything with the sudden trip out of town for my grandfather's passing plus just the emotional drain of that, the most needy baby I've ever encountered, and little girls wanting to know why I couldn't come eat lunch with her or be a parent volunteer like other mommies just all pulled me in so many directions I eventually just mentally collapsed from it all. I had maxed myself out, and somehow I didn't see it coming until I was so down I knew I had to do something fast or I was going to take everything and everyone down with me. Everyone said I did the right thing by going to the doctor's about not feeling myself, but you don't understand. There is no way I could cope like that for long.

I  have a whole new appreciation/understanding for people that suffer from severe depression and anxiety. There were moments in the last month that were suffocating. To go on like that for months or years, seriously, people, that would be torture. I attempted to manage for a  month on my own like I had done in the past with exercise and writing but I knew I was quickly spiraling in a whole new direction that required more intervention that what I was capable of giving myself.

Maybe we all need to lose our shit every now and then. I still struggle with feeling like I couldn't do it all, be it all, manage it all, but as many others have told me sometimes we just really need to unburden ourselves for a moment. It's okay I realized. I don't have to carry it all. All the time. Yes, may we be strong women but the reason we need to know strong women is so when we're down they'll help carry us and in turn we'll do the same for them when they need it. Lucky for me I have some amazing friends that have been great to talk to through all of this, and of course I think their support more than anything is what is helping me bounce back.

After a month for the first time since September sometime I am starting to feel like myself again. I put myself through some quick professional and friendly talk therapy and medicine to hopefully kick this sense of not being me. So I write and I share this for all of us. For anyone who has, is, or may find themselves in a similar dark corner and I pray your stay there is short lived and you get the support and help you need as quickly as possible. 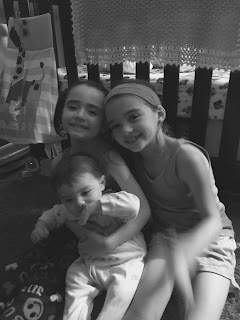 .
Posted by Stepping into Motherhood at 9:12 PM