The Parent Business of Preparing a Will

While I was home a few weeks ago my sister was updating her beneficiary information on all her accounts now that they have a child. I remember shortly after we had our first daughter how we rushed about finding a life insurance policy and signed off on it all by the time she was probably two months old. First kid, you know, where we were gung ho about doing everything right, even if we're dead. Even though we had been married for about two years I think that was about the time we went back to our retirement accounts and changed our beneficiaries to each other and added our daughter in case God forbid something were to happen to both of us at the same time.

That was eight years ago. We haven't looked at or really put forth much effort to follow up on what would happen if something happened to us. It's not really what you want to discuss on date night or even those rare moments in bed ALONE together. Discussing it at the dinner table while the kids eat just seems like it would ruin their fond childhood memories of "family dinner" for the rest of their childhood.

However, between my sister putting her affairs in order for her newborn son and our upcoming trip alone without our kids, we managed to address the issue that we really should have wills and updated beneficiary information with who is custodian of the kids and their funds if something were to happen to us. I think it's one of those things you'd prefer to avoid for as long as possible. The weird thing it's not even the thought of "oh my God, I don't want to die!" but more you hate the thought of your kids growing without you, even more the thought of both of you where their whole way of life as they've known it would be so completely changed. I think we managed most of our discussion through an actual email. It's Pens Playoff Season so if I approach any topic that is not hockey right now I won't have to worry about my last testament because talking during an intense hockey game will be it!

However the email discussion ended something like this, "I'll agree to that should we kill each other...I mean go down in a fiery crash over California, I mean crash into the ocean and get stranded on a deserted island and I have to eat you to survive....  But ya hopefully we live to a ripe old age...  I don't feel like going to sleep forever yet... got shit to do!" So when approaching the discussion of your afterlife plans should you both perish at the same time make sure it's not during a time that will end your life sooner than expected and have a sense of humor while tackling the discussion and task!

Unfortunately, on a serious note though, I've seen too many people around my age pass unexpectedly including a coworker's dear friend from the flu this past year. So this past week we did the adult thing and updated our life insurance and retirement beneficiaries to now include all of our children with a custodian guardian if something were to happen to both of us at the same time. I get now why parents say they're worth more dead than alive.  Then we each drew up a Last Will and Testament at this great site called the Legal Depot. It was easy and super user friendly. If you don't have one yet or a lawyer friend it's a great way to draft one. It says we only need a witness signature but will probably have it notarized when we go have our beneficiary papers notarized.

I then told my husband and my mom that God forbid if something were to happen I now have all of our important papers in what I called the Dead Folder. Preparing your last testament and desires were something to happen to you is not one of those most pleasant adult experiences, but with three little kids we were probably way overdue to take care of having it all updated and current to our wishes. 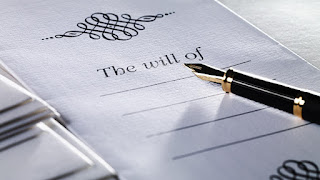 If you missed the past happier blog posts
This Blog and Me: Hobby or Work
Making Life Cleaner with Essential Oils

Posted by Stepping into Motherhood at 6:38 PM