I shared this article about sex on my Stepping into Motherhood facebook page the other day. Between that and I'm a part of these moms groups on facebook as well, I've found women are oddly curious about how much sex other women are having. I feel like I get to be a fly on the wall as I watch all these women respond these sex inquiry threads in these groups. The responses of "normal" range anywhere from a barely ever within a year to a few times a week. Actually I'm pretty sure a few even maybe said a few times a day to almost daily. With small kids at home! Sorry, I had to pick my jaw up off the floor on that. Really? Do you think she was for real???

If you don't know, I'm a very goal oriented person. I like to set goals and see what I can achieve.
I don't share them too often because honestly I don't usually achieve them in the amount of time or the way I want or sometimes at all. Recently as my life has seemed to be turning a corner, and we're on the horizon of entering a new phase of our life as parents as we're leaving babies behind and transitioning to older kids, my goals have started to shift to my marriage. It's seriously taken a backseat the past almost decade. I even looked at my husband last night at dinner as I rolled my eyes that the toddler was overtired and screaming and the girls were whining that they had to go to the bathroom AGAIN and told him we're so close to this needy, dependent phase of parenthood being behind us, and I felt guilty even admitting out loud to him that I was quite excited about that possibility. I don't want to rush my kids growing up, but it's been him and I elbows deep on our own with no family or back up doing this parenting thing for almost a decade now. When people invite us out to do things that don't include kids we have to decline because there's no one else to watch the kids except us or someone we'd have to pay. We've had so few dinners alone or kid free with friends I could probably count them on my one hand. It's rarely just him and I in bed alone because they seem to always be in there with us. But as we get ready to embark on our third trip in thirteen months without kids, it's like I can feel the freedom that comes with exiting this phase of parenthood. We've finally started to feel they're old enough to leave for long weekends and even a week with family while we leave town, with the two oldest in school now and the oldest being just a few years away from being old enough to leave in charge we can have a dinner alone again so soon, and they're starting to sleep more in their own beds and less in ours.

We've been buried in this demanding phase of parenthood for so long, I think our biggest goal was survival most days. It still is some days, but my latest goals, mommas, have started to shift to my marriage and sex. Tell me I'm not the only one that's considered setting sex goals. I've been exhausted and overwhelmed for the past decade. I have handed my life over to these little people that I love with all my being but at times they have drained me where I have nothing left to give at the end of the day. I'm four years away from 40, and I read once where women hit their sexual peak in their 40s. I think I now know why! Without children clinging and needing something from me 24/7 and with my body being mine again, I may actually have more energy and desire for things not related to mothering.

So my goals as I head into 36 here soon are about sex. I want to have more sex as I head into mid life here. I want to turn our monthly average into a weekly average, and I want to be motivated to do that and not be too tired!  I hope these little trips without our kids are just the beginning because they have been wonderful this past year for allowing us to reconnect. As much as we both love those three little monsters of ours and the journey to five is something neither of us would ever change, I  don't want to forget the two people that began the journey. Because I think too often as we go from couples to families and we change from who we were to Mom and Dad it's very easy to lose the couple that began the journey. 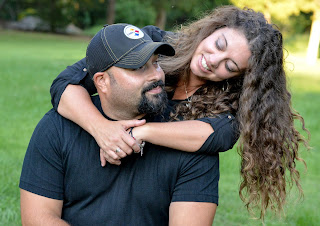 Posted by Stepping into Motherhood at 3:12 PM