What Has Women Frustrated with Their Husbands?

This article by Scary Mommy stirred up quite the debate between my husband and I. He always goes to his best defense when articles or discussions about the balance between men and women is brought up- it's man bashing and he does help around the house so it's bullshit. As I told him for at least the second or third time we've had this similar debate, the argument is never about him helping around the house as he has met that expectation long ago.

But where the problem lies for why women are often angry or frustrated with their husbands  is because they feel undervalued, underappreciated, overlooked, and criticized for their flaws more than for the things they do right. As a working woman- in a field that is undervalued, underappreciated, and criticized- I suffocate at times from feeling like this. Though it was a frustrating conversation on both of our parts to have, I am glad I finally spoke up to tell him I see this as a real problem that shouldn't just be ignored as a bitchy woman moment.
If men want the bitchy woman thing to subside, they have to understand us better. Honestly, as I told him over the course of ten plus years of marriage I've come to realize men cannot read our minds. I don't know about you but I think sometimes I thought bitchy, passive aggressive behavior would communicate to him what was bothering or upsetting me. I can tell you it doesn't work. We have to speak up for ourselves and that is on us. I can tell you a productive argument where you really say the things that you keep bottled inside can lead to better results. Typically in our case not right away because we both always think we're right and can't in the moment admit we're wrong or could work on being better to the other person. But I have seen both of us work on changing our behaviors after these little arguments so I'm hopeful by voicing my frustration and hurt things can change for the better.
I've talked to enough women over the years to know that feeling undervalued, underappreciated, and over criticized is not something I am alone to experiencing. Scary Mommy's article about why women are so angry is not the first article ever written about trying to figure out what the hell is wrong with women because this is not a new problem between men and women. I think quite simply men have no idea what it's like to be in our shoes. Not that we know what it's like to be in theirs. But we feel like they have no idea what we do, and remind us of that when they ask that damn question one too many times of "What is it we do all day" or in my case all afternoon before he gets home.

There is much that we as women do behind the scenes that is all too often is overlooked and taken for granted.  To point this out to him I ran through the things I take care of for our family that he's oblivious to that he never has to think about managing in his day because I do it- running our family budget to include the $$ for all our travels,  actually making sure all the bills are paid for the month, the round up of lunches and bags and daycare materials for each day, making sure kids' field trip and yearbook forms and everything else is signed and paid for on time,  managing the family calendar to know who has to be where when, running kids to meetings after school and back before he even gets home from work, scheduling everyone's appointments and even knowing when they need to be scheduled, corresponding with other parents for playdates and pick ups or RSVPing for that party or this wedding, planning the kids' birthday parties, renewing insurance policies and utilities, signing the kids up for all their sports and activities and school registrations, getting outside with the kids after school and working on their latest balling skill, laying in bed with them at the end of every night trying tirelessly to get them finally settled some nights, managing the running grocery list of all the things we run out of throughout the week. I imagine most moms mental to do list is similar to mine.   This never ending mental to do list that they never even have to think about is the hamster wheel of never ending chaos that runs through our minds every DAMN day. It's so MENTALLY exhausting so yes, we are stressed trying to remember to take care of it all so that shortens our patience but then to even question what it is we do with our time or that we don't do enough - oh buddy, you are so asking to unleash a storm of fiery rage upon yourself.

My suggestion to husbands to understand your wife's frustration a bit: don't  act like if the house is a mess we must not be doing anything productive with our day; don't complain or make her feel like she's a bad wife or mother because at the end of the day she gets out her computer, book, knitting, or whatever it is she likes to do to finally unwind. Don't make her feel like a bad mom because she needs a break from the kid that's been whining at her feet for hours while you were at work or out with the guys or that she hands over the kid to you at bedtime because spending an hour on that fight is the last straw on her patience. Realize the way we see it is that it always seems like it's okay to let mom take care of the kids while dad does his thing but guilt is imposed on us for doing what men do guilt free because the expectation is still that mom takes the lead with the kids.
Please realize the contradicting expectations we face. My husband and I were arguing about our failed parenting when it comes to putting our kids to bed. He was criticizing me for not doing a better job of putting the kids to bed, but then turned around and told me it was my choice to not give myself an hour of down time at the end of the day like he gets after we all go to bed because my day starts a good hour before his.  In order to meet his expectations of being a better bedtime enforcer on my own I have to give up my hour of down time at the end of the day and that statement right there said it all to me in the contradicting expectations of what moms face.  Men/husbands don't face that- they aren't up against the same criticism and unrealistic expectations that we as women and mothers are and that is why we get angry and bitter and frustrated at husbands.
So, husbands, you should never question whether she is productive enough with her time by asking her what she's done all day. If she does choose to take an hour, an afternoon or evening, and even a whole DAMN day to herself and do whatever the hell she wants you do NOT question it, you do not complain, you do NOT make her feel guilty. There's a reason why there are silly memes about what's on a woman's mind verse what's on a man's. You can't even imagine the mental load she carries so to avoid the wrath of women take note of the things she does and just recognize them rather than what she didn't do that day that you expected of her. Mention the things she does well with your kids and in what ways she's a good mom, recognize what she does to take care of the family, see what she does that no one else does or that she does that you can't do. It's not about laundry, dishes, cleaning the toilet or who is making what money to pay for what. It's about seeing the things we do that go unnoticed.  It's about not making us feel invincible and undervalued. It's about accepting she's not perfect, it's about understanding that she makes mistakes but not using those to value her worth, it's not expecting her to always be some overly happy 1950s wife but understanding that she carries a lot on her plate and some days it tires and overwhelms her but she'll be up and right back at it all tomorrow. 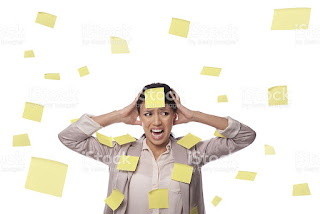 Posted by Stepping into Motherhood at 5:53 PM