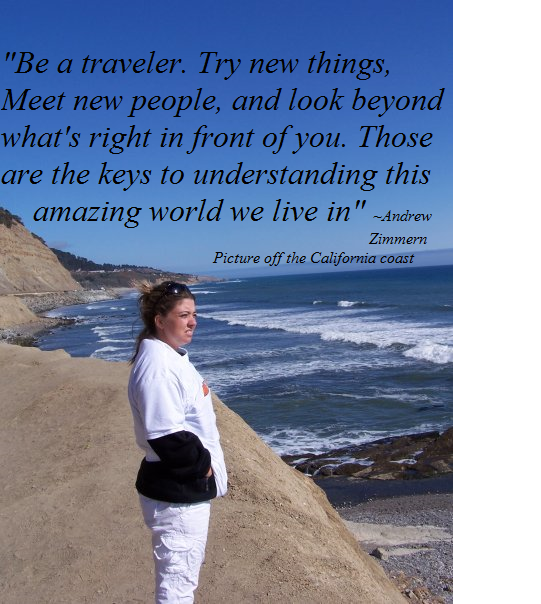 I have this goal to put a pin on almost every state in the United States (not really sure what to visit in places like Wisconsin, North Dakota, and a few others), parts of Canada, Mexico, and the Caribbean. I want to hit as many historical landmarks and National Parks as we can. I'm about halfway through this first part of my goal.  My far reaching dream is to then make it to a few places overseas.  Even though flying is a convenient way to get somewhere fairly quickly and I don't have the anxiety about flying that some in my family do, I just prefer to drive. Sometimes the trip is just as much about the drive there as it is the end destination itself.

Whether it's the mountain ranges of the Appalachians, the flat plains of the Midwest, the coastal roads of the East or West Coast, and hopefully one day soon the lands of the west the differences in the views and sites never cease to fascinate me. Driving through those mountains and plains just always fill me with a sense of contentment. Maybe it's similar to why I'd prefer to exercise outdoors rather than  indoors; there's a sense of freedom and peace to it. Nature to me is where God lives; it's out there where I've always felt closest to Him.

I also love to stop and eat in all the local places, trying food that is known for that region. Along with that you also get to experience people. People are different in different parts of the country. Of course not every single person on the East Coast, Midwest, Appalachian, or the south is a certain stereotypical way, but there are stereotypes for different regions of the country because it doesn't take long or many people to be around in a certain area to see why that stereotype (good or bad) exists for people of that region. I've always loved to study people so I find this another fascinating benefit of driving across the country rather than flying. Nate and I both love to meet new people. We spent half of our Caribbean vacation years ago with a couple we just met from Tennessee, and we did the same thing years later camping with a couple we had just met in Yosemite.

Nate and I are the odd balls, the different ones in our families. We both come from families of homebody type people, and there's nothing wrong weith that. That's just not who we are. Even as much as my mother says, "Why don't you just stay home?" every time I tell her where we're going on our next break from work, I know I also remind her of her parents. My grandparents and Nate's grandmother share our love for traveling for experiencing as much of this world as we can in this life.  I think grandma (Nate's grandmother) did quite a bit of traveling back in her younger years and my grandparents spent their retirement driving all over the country checking out new places. I've always said I want to be old people like them; I still have a lot more driving planned to continue to see the sights, taste the food, and experience the people.

Posted by Stepping into Motherhood at 11:25 AM