Not Letting My Kids Quit

"No, you started you're going to finish. There is no quitting."

This was so drilled into mine and my sisters' heads that by the time I was an adult years to even decades later when I had reached my lowest point in my chosen career and seriously just considered quitting in the middle of the school year after seeing a coworker do it, I couldn't do it because I seriously heard my dad still saying this to me. If at the end of the year I decided it was time to move onto something else then that was one thing but to just quit right smack in the middle of the year because I was frustrated and didn't want to deal with my current situation anymore had been drilled into my child adolescent mind for so long I just knew it wasn't an option.

Whether it was playing for a team I didn't want to play for anymore or one of us wanting to give up pitching because we were struggling and having a rough year, my father was adamant in us girls knowing "You DON'T quit. You start you finish."

Some might have thought my dad was too hard on us. My grandmother would always remind him "we were girls". God love Grandma but girls need tough love just as much as boys! You cried, you dragged your butt on the field, or you let a few failures beat down your self confidence, it was like the old Marine in him came out. I remember going through this phase where I was afraid of the ball so he took me out to the side of the yard and hit grounder after grounder at me. For every one I raised up from staying down on it was ten push ups. I'm pretty sure I did well over a 100 push ups that day. I'm sure there were times my sisters and I would get mad at his "lack of understanding" that would bring the tears or wanting to get down on ourselves. Even though all the "you don't quit" lessons I remember were on an athletic field or court, I imagine we all three see now how they were quite valuable in our lives later.

So tonight I had to pull out the tough love on my daughter. It was kind of hard and I'll admit I felt kind of bad for being so hard on her. This isn't the first time nor will I'm sure it be the last. Sometimes my husband tells me I'm too hard on them (but they're also daddy's girls so they get babied plenty by him). Even though she's the youngest on her softball team and doesn't know anyone she's seemed pretty interested in the past three weeks. Her and I have gone out in the yard a few times. But today was their second outdoor practice. In the cold and wind. It was cold, but this kid goes outside and plays in all types of weather all the time. About twenty minutes in she is leaving the field, whining and wanting to go home. I tell her no, she can tough it out like the other girls, and she plays outside in cold weather all the time. Then she starts crying.

Now you have to know my daughter. The girl is a good girl; she has a big, loving heart; and she's a girl that genuinely cares about doing the right things. She really is a great kid;  however, she's not perfect and one of the things she's also a master at is pulling the drama card to manipulate to get her way. I've seen her do it many times. She loves to turn on the big crocodile tears. Daddy falls for it quite often. However, when she tries to pull it on me it just makes me mad (which I know is one of my big imperfect flaws). So I was that mean mom with the crying daughter that made her suck it up and go back out on the field cold or not. She started practice she was not going to whine and quit in the middle of it because it was a little cold. I was not very sympathetic to her and I probably didn't earn any mom brownie points (however none of the other girls were whining and crying to go home because it was cold). And I reminded her when she got in the car crying and trying to whine her way out of something was not going to work with me.

There are many things she's going to have to do that she doesn't want to do or like to do. Even when it's something she loves there are going to be moments that are hard to get through or make her want to quit because it's not easy or fun at the moment. But you can't just throw in the towel as soon as the going gets tough. Right now while she's young it's sports or other activities but later as my sisters and I came to see it's jobs, it's relationships, it's commitments to people and things we care about, financial and other responsibilities,  it's just life in general.

So maybe I was a little tough on her. Maybe I was why she cried because she didn't think "I was the one that was understanding". Maybe one day like my sisters and me she'll see it wasn't about practicing in the cold when she wanted to quit but more about teaching her to push through the hard spots when she wants to quit. 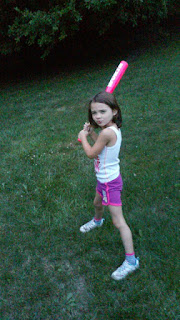 Posted by Stepping into Motherhood at 9:15 PM