As we're about to bring baby #3 in seven years into the world I keep thinking or mentioning to my husband how different things are this time from the first time. In some ways it's financial; in some ways it's just a different mentality than it was seven years ago. Thank God my second was a girl because we wouldn't have been able to buy all the new stuff we just did back then if she was a boy. We barely bought anything for her because we had just bought or received brand new baby girl stuff just a few years before with our first, and we were focused on trying to hopefully move out of the city soon.

I like to think even as chaotic as it seemed at times that I enjoyed my girls while they were babies and toddlers. I wouldn't really say I miss those days though to be honest because I absolutely love the ages they are now, and I love where we are in life now.  Financially adding kids was hard, especially as we were still in those early years of building our life with masters degrees and buying a home out of the city,  and I let finances stress me out way too much. With my first daughter I coached the first two years of her little life while finishing grad school and with my second I taught PT at the community college after my regular school day for two years while her dad did grad school, and I ended up working the only three summers I've ever worked as teacher in ten years. Three summers of the four summers that I've had two young kids at home I worked summers; not that I necessarily worked a ton any of those three summers. I did the minimum of what I needed to pay the bills so I still had more time at home with my girls.

Besides the stress of finances the other big change is just a different mentality than seven years ago. I  remember my anxiety about being a working mom both times. With my first it was that first time mom anxiety of am I doing the right thing for her by going to work, what am I going to miss, am I going to be able to handle working full time and being a mom. My mom stayed home with my sisters and I for the first ten years as did pretty much all the women in our family until my generation with my sisters, cousin, and I. All three of us were returning to work after the birth of our children even though the older generations (aka Grandpa-got to love him though) criticized us for having babies if we were just going to leave them in someone else's care. With my second it was mainly the fear of being overwhelmed with two little ones at home and working full time; the known feeling of guilt that occasionally accompanies motherhood. Yes, there was guilt at times, there was doubt at times, there were failures at times, but I also found wonderful relationships in the women I entrusted with my daughters' care over the years. I look at my daughters now and I know they've thrived in the environment we and their caregivers created for them.

This time around because I know my capabilities to balance motherhood with a full time career, I don't feel the same anxious rush to return to work like I did with my first to prove to myself I could handle both or the same dread I did with my second, but rather am first looking forward to my longest stretch at home as a stay at home mom for four months (minus the few days to two weeks I'll go back to close out the school year) but feel I'll be more than ready by the end of those four months to return to the balanced role I've found in the last year or so as a working mom. I feel in a place mentally where I can just really enjoy being home with my babies these next couple of months but also confident in the transition back to work at the end of those months.

With my first too I remember the fear and doubt of us taking on parenthood with no family around for additional support. I expected it to be hard, and it is hard. But maybe I'm just use to it now or again confident in our roles as parents now, but in the long run it hasn't been as hard as I expected. It has its moments, but it's not a neverending hardship. So again as we embark on bringing home baby #3 I'm confident in who we are as parents and know we can tackle the challenges that await us as parents of three.

I started this blog to reflect my struggles of how unput together I felt at times in trying to wade my way through motherhood and even adulthood I think. Just as we like to think we turned 18 so now we must be an adult, we think "I've had a baby so now I'm even more of an adult in this role called mother". But they're both a process. They're not just something that occurs over night with a special event. It's trial and error and learning and growing. When I published my book Moms, Monsters, Media, and Margaritas back in the midst of not being sure if I was swimming (more like treading water) or drowning in motherhood I built the theme around the idea that motherhood is a long journey that takes us from the girl we were to the woman we become. Even though the book was finished and published almost two years ago now I was really still in the midst of finding my way to being the more confident mom I am today. Maybe it's why getting to this point of three kids included the past year and half of struggles that it did because even though I was headed in this direction a year and half ago I wasn't there yet; I wasn't to this place of contentment and confidence again.

I was reading a student's paper the other day in which he was telling the story of a great game he had; however, he kept focusing and beating himself up about the one play he missed. How often as mothers, as women, do we do that? We focus too much on our screw ups or flaws and miss enjoying our kids and the things we do right. That was me at points, usually with a heavy dose of sarcasm. I've beat myself up too many times about the times I didn't handle myself so well because of frustration or exhaustion, the times I felt like I didn't give my kids, work, or something else the effort I should have.

Now as I head into baby #3 I know there will be guilt but it doesn't need to consume me; I know I will fail at times but it will be okay because I'll learn from it and do better next time, and even though my confidence in my role as a working mother has grown there will still be moments of doubt but I will confront them and move on.

I know now it's not all failures; it's not all successes. I know there will be times I will struggle and fall down. But I also now know I will get back up. I'm confident in my ability to be a working mom now. I know my capabilities but I also know my limitations. I know my kids don't need a perfect mom because it's through my efforts and my mistakes they'll learn themselves that we try our best and in trying our best we'll have our good days and our bad days but just keep learning, growing, and moving forward.

I'm so ready for baby #3, to begin this journey of a mom of three. Will I be a better mom now? I don't think necessarily; I'm just a different mom now than I was. Honestly I like her better. Not because she's necessarily better but because she's confident and she believes in what she's capable of again. 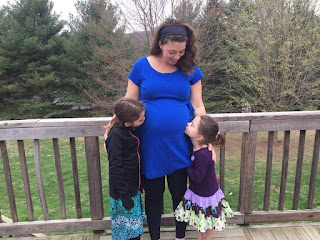 Posted by Stepping into Motherhood at 10:16 PM