The Rejections Behind the Acceptances

When I was a kid and first started to write the internet did not exist. Social media was over a decade away. I don't even really recall having a computer in our home until after I moved away to college so I did all my writing in little spiral notebooks or on loose leaf papers. I have journals that date back to the fourth grade still logged away in my fire proof safe and a box of six fictional stories I wrote between the ages of 10 and 14. I was terrified to let anyone read them. I let my sisters read a few and my best friend loved to read my journals that recounted real life as a kid growing up.

As I was exiting college not only was the internet now more of a normal thing but social media was born. I am quite fascinated with the tool social media has become for women. Social media has given women a stronger voice than ever I truly believe; it has given many a financial freedom that was never possible to the generation before as women promote and market consulting businesses from their homes. It gave me an audience for my writing.

Over the last few years I've watched women brand themselves for their interests, their communities, and for products that promote confident strong women. "With the rise of mass media throughout the 20th century, the popular image of women in America underwent a substantial change. From Marilyn Monroe to Kate Moss, the body shapes of the most admired models have remained consistently slimmer than that of the average American woman, representing a nearly impossible ideal. This has resulted in a severe rise in weight anxieties and negative body image among women and girls." (Women's Body Image and BMI...100 years in the Us  )Whereas in the 20th Century the mass media promoted the idea of what a strong confident woman in an unrealistic sense that left women with poor body image and low self esteem,  the every day 21st Century woman now has the voice to change that image. And we are! With our products-be it health and fitness programs, clothing, skincare, our worth as community members striving for a better place to raise children, and the list could go on.  You name it, ladies, here in the 21st century we are reshaping a better more powerful, confident image of the modern day woman for our daughters and the future.

However, being that voice on social media also comes with its moments of rejections. I've seen woman after woman put herself out there, but also encounter negativity and rejection for promoting that very idea of reshaping a society of more confident, strong women. I like to think of myself as one of these women who use social media to move forward in reshaping the image of the 21st century woman into a strong, confident woman that is beautiful inside and out and capable of anything she sets her mind to.

My choice of method has been my writing. Like so many other women that I've watched that brand themselves and use their voice to reshape the image of the 21st century woman I have faced my fair share of rejections. However, it's easy for me to hide the fact that there's a lot of rejection that goes on behind the scenes of the successful pieces of writing I share. Like many that promote something specific online I get criticized for using social media too much. I get criticized for being too blunt and honest, I get criticized for just being me as I know many others do as well when they passionately promote the things they care about. To be a voice is hard; to be quiet is much easier. But we also get thanked; people appreciate our honesty, there are people out there that appreciate our voice, and we do inspire other women to find their confidence, their strength, and chase change and their dreams. Our voices do matter and are making an impact.

Not only do I face the criticism from those that know me though, but just hobby writer or not, it also comes with lots of its own rejections from editors. I think I have submitted essays to four Chicken Soup for the Soul books. My essays have been accepted for two of the four. I couldn't be more excited to be a part of these two because they promote the very thing I've spent the last almost four years promoting with my writing: strong, confident women.

I also have my fourth essay about to be published next week with BellaOnline's Literary Magazine Mused. I first discovered Bellaonline when I stepped out of my shell to put my writing out there. They published my very first essay in their Fall 2012 Issue, rejected one, and have since published two more, before they'll publish this fourth one next week. Bellaonline's website motto is "Voice for Women" and at one time was the second largest women's website, and where I've watched several parenting and women websites fold over the years it's been around since 2007 shortly after the birth of social media. However, as much as the editors seem to like my nonfiction essays they pretty much fired me from writing a column for their website. Something wasn't quite a good fit I believe they said.

Writing as a voice for women is actually a pretty tough circle to break into. With sites like Scary Mommy, who though has rejected me a few times, has taken the time to send me a personal email response telling me they loved my piece but it wasn't quite original enough but to please send more, there are thousands of women writing away about the experiences of motherhood and being a woman in today's 21st century world. It's a fiercely competitive place to get your writing seen. Whether it's Chicken Soup, Bellaonline, or Scary Mommy my writing pieces are one in hundreds of pieces of writing speaking for women.

But it's okay I'll take my rejections with my acceptances. I know even if my reach is small it's still an important reach. It still spreads a message that women of today need to hear. It's part of the movement to promote stronger, more confident women for our 21st century world. To any other women out there, who faces the rejections with the successes, don't give up. Your voice does matter. People do hear you. You are making a difference. Go out there and be that powerful, confident woman that I know you can be! 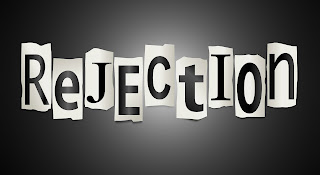 Don't make me feel rejected. Sign up for the 2017 monthly newsletter!
Posted by Stepping into Motherhood at 8:21 PM