The Lesson of the Poop Emoji 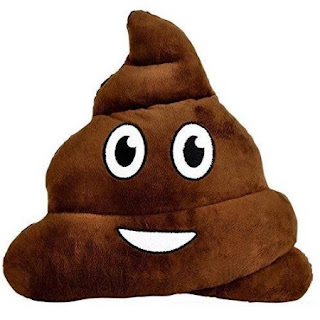 Does the tween phase start at like age 8? The emotional drama of mine lately has me cringing and wanting to curl into the fetal position in fear for the pre puberty/puberty adolescent years ahead. And my eight year old has always been my easiest child?!?! So if she's becoming a parenthood challenge now what does that mean for us with the other two?!?!

Parents that have been there and survived, how do you not lose your S*&T and patience for the next ten years and then just as we're reaching the golden years with her and her sister not far behind we'll be starting all over with the boy?!?! Is that easier or harder? I'm kind of scared to know.  Either way you should just lie to me and tell me it is easier.

She thinks I'm like the meanest mom ever anyway because I make her empty the dishwasher, put her own laundry away, and clean up her room. Even though some days she'll do it without any complaint; other days she tells her sister how I make her feel like the maid. Yeah, I had a good laugh at that one. I'm pretty sure I was the one rolling my eyes that time and told her just wait until motherhood. I deal with other people's kids' attitudes without much choice in the matter these days if I want to keep my job so I have little tolerance for attitude from my own kids but I'll give her a little credit. I am pretty hard on her and do hold pretty high expectations that probably forget the fact that she is only eight. But I cannot stand when people lack accountability and can't clean up after themselves or do their part so one of my life's ambitions is not to send another one of those people out into society. So her and I butting heads isn't really any surprise but twice now the attitude has even reared it's head with daddy !

Yesterday her dad took her and her sister to see Wonder Woman which I think they enjoyed but I wouldn't really know because the attitude was all over her pouty face when she got in the car because her dad kept telling her no on spending her money. Every time we go to the store and in yesterday's case the mall the girl digs through her piggy bank and brings a little purse hoping she can talk us into letting her buy some toy. She wanted this poop emoji thing and her dad told her she didn't need to spend her money on a poop emoji. What the heck does a kid need a poop emoji for??? Somebody explain this to me. Then she wanted some other things but of course I got the biggest laugh out of
the pouting about no poop emoji. Rather than share what was nice about the movie she rather chose to pout the whole way home in which case my husband then also got irritated with her poor attitude and lack of gratitude for even going to the movie. Mind you this is the same girl who was overly thankful and told her daddy so for taking the time to take her to the father/daughter dance a few months ago. Where did that girl go???

Then tonight I told her I was going to put the $100 I borrowed forever ago back in her little savings account, and she of course holds her hand out and says, "Just give it to me." Haha. Not happening, kid. As soon as this kid has a quarter in her pocket she's looking for ways to spend it. I then go on to tell her how that's the start of her savings that she'll hopefully build up herself later to buy herself a car when she's 16 or 17, and she says, "It's my money. Why can't I spend my money the way I want?" Me of course being me replied with, "Why do eight year olds have to have opinions?" Like, seriously, they're only eight why do they have to think for themselves already. I'm all for self sufficiency as soon as possible but arguing their own opinion so soon? (

We all kind of chuckled at that but it left me thinking. First, I thought this parenting this was suppose to get easier? I think it just changes difficulty. Two, whether it's her piggy bank or her savings account that I'm still not letting her touch until she's older and a bit wiser it is her money. However, how do I teach this kid the value of money? Financial responsibility is huge in my book of succeeding or not succeeding in adulthood so if I can't send her out into the world financially responsible then we have failed as parents in some way.  She and her sister are definitely use to me saying no to things because of my own money habits; which is partially why she sneaks her own money to the store because she knows she won't talk me into spending my money on useless toys.  I get that she's young and again the expectations might be too high and she'll learn as she gets older, but in the meantime the dramatic pouty attitude of not getting her way lately is about to make my momma crazy come out.
Posted by Stepping into Motherhood at 6:30 PM