Youth Sports: The Parent on the Sideline

My husband and I both grew up with youth sports dominating our childhood lives. We loved the game; no matter what sport there was something about pushing yourself, the adrenaline of a close win, the heartbreak of a close loss, the momento victories that I'm sure we've both made bigger than they actually were by now, and we'll both often reflect on the character traits and passion that youth sports gave us that has served us well into adulthood.

For our kids to be reaching that age to begin playing competitive youth sports is probably one of those parenting experiences we've both been looking forward to since we began parenthood.Though we've always said we would never force them to play something they didn't want to play, obviously our kids loving sports makes our hearts happy. If they weren't interested in sports at all, as much as we would hate to say it, we would let it be, as long as they were interested in something besides video games and watching TV all day.

Our girls are active kids who like to be involved in things and try new things. Our oldest I'm pretty sure would try every sport that is out there if we could find the time and money to fit it all in. But as much as we've been excitedly looking forward to this point in parenthood, when we would get to sit on the sidelines and cheer our kids on in youth sports, I'm coming to realize this is a much harder role to play than I realized.

By her own choice my oldest decided to move up to the more competitive travel club soccer league this year. We were excited for this- all day tournaments, trophies for actually winning, having to earn her playing time, girls she could grow up with playing for years to come. But we could see right from the beginning she was intimidated. These girls were GOOD. When she gets intimidated we've notice she shuts down. There are lots of things she could work on to get better, but one of the most frustrating things was watching her lose her confidence, not play up to her potential, and her lack of aggression. It doesn't matter what sport you play, you have to be a confident, aggressive player.

There are mental parts on top of the skill part of being an athlete. Honestly, it's those mental parts of an athlete that we carry way beyond our time and years on the playing field.  To sit on the sidelines when your kid is slacking (not being aggressive or playing up to their potential) can push your own self control to the limit. There have been times we've just wanted to yank her out and demand to know what the heck she is doing?!?! So then of course our first response when she comes off the field is to light into her about what she's not doing. We've been pretty hard on her. But as I've taken stock of her reactions to our reactions to her playing, I've had to reevaluate this whole parent on the sideline thing.

As someone in a profession who feels like people just want to pick apart my flaws and shortcomings right off the bat rather than commending my strengths, and knowing my own reaction to that is to shut down or want to "escape" so I don't have to deal with the criticism anymore, I've had to ask  myself "really are we helping her here" or are we just stripping her of what's left of her confidence?
I don't necessarily think going easy on her is the answer - even being as young as she is- as I'm not one to "coddle" my kids in fear of hurting their feelings. I think experiencing disappointment and frustration at people's feedback and knowing how to manage her feelings in reaction to those is a valuable lesson in itself as unfortunately we're all going to face people's criticism and corrections and have to know how to respond and manage those.

The kid is a super good kid. She wants to please people and she responds very well to directions or redirection or whatever it is you need to ask of her. I know one of the greatest lessons of sports is how to take constructive criticism and earning your place and any recognition we may receive. I don't necessarily think it does her good to tell her good game every game when there are things she can work on to get better.  I'm finding there's such a thin line though in how to encourage them and give them constructive feedback without killing their love of the game or self confidence.

There's such opportunity here for her and us to learn valuable life lessons when it comes to playing the game. I'm not sure we have it figured out yet but we're working on it. 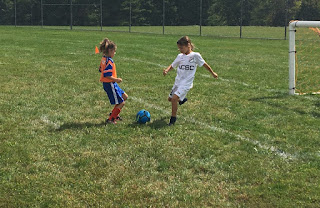 Posted by Stepping into Motherhood at 5:36 PM