It is Friday, but not just any Friday for me this year. This week last year is when everything started to unravel at a rapid uncontrollable pace for me. All week my facebook memory reminded me of my struggles from this week last year where I was desperate for sleep from a then six month old that decided to have a sleep regression crisis all while I was trying to prepare for an observation in a class where though I had one more week than I do this year to memorize kids' names that my foggy brain could not grasp while I was also suppose to be getting papers graded on the new grading scale for upcoming interim reports on top of the usual chaos at home with chores and this kid has that and this kid has this.

I pulled this from the blog post I wrote on this exact day last year:
"So this week I failed. I feel miserably.  I failed at my job, I definitely failed as a housewife as the dirty dishes in the sink can attest to that, I'm not doing very well in the marriage department at the moment, my uncharacteristically crying seven year old and my four year old putting baby food in her brother's eye and not having a six month old sleep through the night might be indicating I'm failing motherhood at the moment too, and I even failed at being the damn tooth fairy this week."

I was trying to find the humor in it all but two half weeks later I reached a point I never thought I could reach. Hitting that crashing wall of reality was a huge blow to my self esteem and to my sense of self. No one probably puts higher expectations onto me than I do myself, and as much as I can sit here and say we all need to cut ourselves a break and love ourselves, I am sometimes the first person that needs to hear my own advice. I had this vision in my head as I headed back to work for the first time as a mom of three a year ago as I was also approaching the big 3-5 in October that I was going to nail this whole working mom balancing act. Year after year I felt like I fell short but yet felt a little more balanced and headed in the right direction. So when I failed miserably it was like I had a self identity mid life crisis, if that is such a thing.


Even though the unraveling of myself peaked in October, it was a longer road than I'd like back to myself. I know for all of us at some point it feels like every day is a fight- a fight with ourselves to be who we envision with who we are in that moment, a fight with being who everybody else thinks we need to be verse who we are, a fight to get over the failures and the let downs and get back up and move forward.

This past summer was the absolute best medicine I could have given myself. I got time away alone with my husband to just be "wife", I got to be a stay at home mom with my kids for four weeks and just be "mom", I put in a lot of working at home hours on preparing for the upcoming school year to focus on the  "teacher" me without the pressure of being teacher and put in hours as the "writer" me without having to battle time to fit it in amongst all the other roles I typically fill throughout a day. I got to individually dedicate so much individual time to all the roles that make me "me", but as approached going back to work and juggling all those roles at once again, my anxiety was through the roof. There was that little nagging voice in my head saying, "It's all too much. You can't do it. You're going to miserably fail again at balancing all the balls in the air."

But here I am at the end of the fourth week of school when the to do lists and the expectations seem to grow and start to consume you. There were about two times this week I could feel my anxiety start to kick in with some unrealistic expectation, but with a little help from my oils it passed quickly. Who knows what's around the corner but if there's anything I've started to learn it's to take the victories where you can. I don't know about you but sometimes it feels like there are way more defeats than there are victories. So here it Friday after staying after school to help students make up work this week before the interim cut off, catching up on grading for those irrelevant but must do interim reports, organizing the school's underclass portrait pictures for next week, getting the yearbook up and running this week, having some great teaching moments with kids in response to stereotypes and race, completing my book revisions to begin the final process to get it ready to publish next month, getting in two of my three workouts (Sundays are typically #3), participating in an online writing promotion event that though I wouldn't do it again I gave it a try, getting another essay accepted for paid publication, working some more on the kids' individual photobooks that I'm hoping to give them at Christmas, running kids every night but one to Girl Scouts and soccer practices, starting to look into refinancing our rental house, and even finishing the sixth book in a series I'm reading. And I feel great! I don't feel overwhelmed or crazy stressed. I feel like the girl that can do it again! I can do busy again. I can juggle the balls without completely losing myself or my mind.

It's not like it was a perfect by any means. I dropped my keys in the trash can one day after work so that was fun to dig out, my laundry- oh my laundry- it's ridiculous but who cares, I haven't mopped our new floors since we got them a month ago, my house is a DISASTER right now (but don't worry everyone will be pitching in tomorrow to clean it up because I think they know by now this is all of our house, not just momma's so everyone pitches in to take care of it),   I did lose my patience with my kids a few times, and I was going to attempt to cook chicken parm but then passed it off to my husband to do at the last minute so I only ended up being the cook one night this week when usually I've had two of the nights.

But it's all okay.  I'm calling this week a big win for myself. I wallow in my defeats sometimes way too long, so for today I'm celebrating the victory of this week. 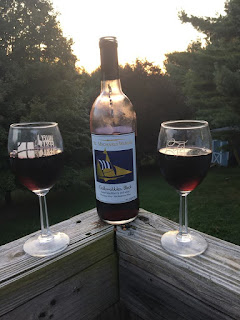 Posted by Stepping into Motherhood at 10:11 PM