The Stepping into Motherhood Community

One of the greatest roles my dad played in life was coach. He LOVED it. For fifteen years my dad coached probably well over two dozen different girls from their little girl years on the t ball field to their late adolescent years on the softball diamond. He didn't make a buck from this work, but man you knew he loved it. And he was good at it; not so much because we did win more games than we lost, including bringing home some nice hardware from more tournaments than we could count (though he could probably give you the exact number), but he was  good at it because of the way he had about talking to us girls and he just had a way about teaching you about more than just the game.

To some people that's what they remember about my dad- that he was a coach-not what he did to actually make money. Sometimes the things we do and what we're known for isn't connected to the life's occupation we choose to make our money. Our greatest accomplishments aren't always connected to our careers or paying work. In fact, the things we're probably the most passionate about and that have the biggest influence on others is probably something we don't make much, if any, money for.

I've always wanted to be a writer. My mom says since I was in the second grade, and it really was from about as far back as I can remember. Though I've ventured out with sharing my writing five years ago now, I still avoid really "talking" about my writing in person because in the writing world it seems if you're not making boo koo dollars and known by more than your small circle of readers then are you really a writer? This is where I often come back to the example with my dad. No, I am not some rich and famous author.

The thing about modern technology is it allows me to do something I love and connect with moms and readers. I am for the most part a little unknown writer. Though Chicken Soup for the Soup tells us publishing with them makes us a published author, and today's modern world has opened a door for independent authors, I still see myself as a writer, a published writer, but a writer more so than an author. I once read where a writer is something you are; whereas, an author is more a label for an occupation that provides you income. I was a writer as an eight year old kid and now I'm still a writer at 36 years old but with more than two readers these days. I have gotten to work with publishers like Chicken Soup for the Soul and I did work with Disney's Babble top writer on my Letters to a Daughter (who does make six figures writing essays for moms so maybe if I dream big enough maybe one day I'll be her :) ), and those were neat, growing experiences for me as a writer but I'm still just a writer and I'm okay with that.

So I'm not making boo koo dollars from this passion of mine, but I LOVE the connection and community with moms that have resulted from my little passion and that is worth way more than any kind of dollars. I've made most of my income from selling the four books I'm a part of, the second place my income has come from is what editors have paid me to publish something I've wrote, and the last two sources of income I've made has come from ads on my websites and product reviews. Because I'm not here to get rich and retire early, when I first started making any money from my work back in 2014 I wanted to use it to donate so here's the breakdown of how that's gone so far.

The Stepping into Motherhood community- and I say the community because without them I wouldn't sell books to make money, I wouldn't get enough reads to qualify for payment for the articles I have published on other sites, and I wouldn't aquire more readers that possibly buy books themselves or read and share the articles I get paid for- has raised enough money in 2014 and 2017 (I only blogged and didn't publish work for profit in 2015 and 2016)  to donate $75 to a childhood cancer non profit organization, buy a few gifts for an adopt a child one Christmas, $50 to a local elementary school, and now $50 to help a fellow community mom in need. Again I say this is a Stepping into Motherhood effort as it is writing income gained from readers that has led to these donations so thank you for being a part of the community.

I really wanted to use Letters to a Daughter money to help two moms in the Stepping into Motherhood community as they have encountered some of the toughest battles any of us moms could imagine this past year with breast cancer and having a stillborn death. I closed up October's book sales yesterday. I didn't get the initial sales I hoped for, but I think with the holidays coming around there will be more. We were able to raise the first $50 donation for one of the moms of the  Stepping into Motherhood community with the sales these last two weeks of October. I'm hoping with November sales I'll be able to sell enough books to make a $50 donation to the second mom in our community that could use a little help.

Both of these moms currently have GoFund pages at Doty Memorial Fund  and Taking on Cancer with Leslea too if you'd like to make a donation or share them on your personal pages. With the end of October though I've sold over 150 books and if I can hopefully sell out all the ones I have in stock currently I'll reach almost 200 sold books and definitely have the $50 to donate to the second mom of our Stepping into Motherhood community.

If you would like to support my writing and the Stepping into Motherhood moms, you can purchase a copy of Letters to a Daughter here or check out my independent author bookstore. If you're interested in a Chicken Soup for the Soul book contact me at glennbabies@gmail.com You can also email me at glennbabies@gmail.com for a discount on three or more copies of Letters to a Daughter or to package any of the four books I'm a part of together.

As always, thanks to my readers, because it is way more fun being a writer with readers than one with no readers! 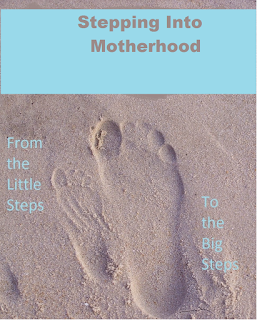 Posted by Stepping into Motherhood at 10:24 PM