When I was seventeen the other pitcher on our team took a ball to the face and was out the rest of the season right before we were headed to Regionals. Everyone it seemed was pleading with the coach, who happened to be my dad, to pick up another pitcher before the big tournament. Without her I was the only pitcher they had left. Now to give them the benefit of the doubt I had struggled that season and though my younger self had gone out there and pitched a whole tournament I kind of doubted myself whether I could do it or not at this time. But the old man believed in me when even I doubted myself. I threw eight games that week and took us up through the loser's bracket to medal third in the semi finals game. Though we were one game short of the championship I did what I didn't think I could do.

I remember when I was twenty-one and headed into my senior year of college and it felt like between working and schoolwork I was just drowning in work. I remember telling my ex boyfriend that I didn't think I could do it. My parents didn't pressure me into going to college as they didn't so surely they wouldn't really care if I didn't finish. But he said something to me that I still remember to this day when I think I can't do certain things. He told, "You will finish because you always do the hard things you or others don't think you can do." He was right. I was just being whiny and dramatic. I finished as the first female in my mom's family to earn a college degree. My sister, cousins, and even my aunt would follow not too far behind me but I did show that it could be done.

When I was twenty-three I told my family and friends I was moving halfway across the country with my boyfriend of the past year. That line of haters and critics stretched clear around the next corner, and I was the first one in that line. It would never work. I wouldn't last a month away from home and my family. I was a stupid, naive kid that didn't know shit. Well, that naive kid that didn't know shit was fairly accurate because well wisdom at twenty- three isn't exactly the smartest time in any of our lives. If building a life with someone else with nothing but two empty bank accounts,  two broken down cars, a newly crippled dog, a microwave, and TV 1100 + miles from home didn't teach me a little perserverance and grit then there isn't much hope for me, but here we are almost thirteen years later.

When I was thirty-three I had just suffered through my second miscarriage in an attempt for a third baby after barely gaining a sense of balance with career and motherhood of two after a year long PPD episode as it was. Well meaning people told me maybe it was best to not try for the third and to give up that dream. The loudest voice to just give up was my own voice but we all know how that story ended with baby boy Glenn.

Now here I am at thirty-six struggling personally and professionally. Some of it is due to the declining of my hearing and some of it is because honestly I get in my own damn way too much probably. A few years ago I think I thought I was reaching a point in life where I had nailed this adult life thing. I climbed my mountains. Now I could sit back, relax, and cruise through the rest of the ride that's life. I did the college and even  the grad school thing, I started a career with great benefits, I was doing this whole marriage and family of five thing, we even got out of the paycheck to paycheck living and had our finances on a better path than those poor kids that came out here. Getting here with all of that was A LOT of work, overcoming a lot of doubt, uncertainty, and setbacks. So why the hell does there have to be more shit to work through and figure out? Why is there not a cruise control in life. It's just like driving down the interstate. I get the cruise control all set and then before I know it something is in my way and I have to take it off.

I kind of think I've let the car stutter and die on the side of the road at this point. I've just been sitting here, looking this way and looking that way, trying to decide even what direction I should be heading in. Here's what I've realized of late of why I'm not getting the car back on the road headed in any definite direction. I'm sitting here, looking for the road ahead that is flat and smooth. It's not there. Every darn road in front of me, contains some kind of mountain that has to be climbed with no clear certainty of what's on the other side. I'm looking for a clear easy shot with a clear view of what's ahead on the horizon, and it's not there. It's not going to be there. No matter how long I sit here it's not going to just suddenly be there. 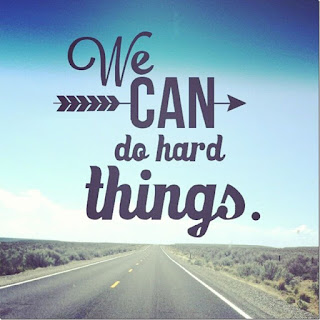