I never knew committing to spending a lifetime to share your life with someone would also mean preparing to duke it out over the same petty battles day after day. Almost thirteen years into this living together thing and we still continue to fight over the following things:

1. Laundry: We disagree on everything with the laundry from how to sort it to how to fold it. He says we sort clothes based on water temperature and I say we sort them based on color. I am also notorious for forgetting to clean out the lint thing in the dryer. So between my cooking skills and this if the house ever catches on fire it probably is my fault. It's not just that we disagree on how to fold one thing in the laundry. We disagree on how towels, pants, and t shirts all get folded. At this point I have consented to folding pants and t shirts his way, but I totally refold all his towels otherwise they wouldn't fit in my cabinet.

2. The heat in the house: He's constantly turning the heat up to 70 or higher and because I'm constantly moving and like to sleep cold I'm constantly turning it back down to like 65. Then he'll ask who touched the heat as if he doesn't know. Then I'll shrug my shoulders as if I have no idea how the heat got turned down or off. And almost thirteen years later this comical ridiculous battle of wills still continues between us and neither of us are willing to consent to a happy temperature in the middle.

3. Socks: So apparently I own no socks and they are all his. It seems like every pair I put on he claims are his. I know he buys himself socks frequently. I don't really remember the last time I bought myself socks but socks are socks, right? I'm sure I own socks. I think. Unless they're all the mismatched ones in the basket. It's even gotten to the point where if I'm sitting in my chair with my feet up, wearing "his" socks he'll walk by and snatch them off my feet and throw them across the room just to antagonize me. However, this has not convinced me to go buy my own package of socks so I share continue this ridiculous battle of the socks with him.

4. Bathroom: Really, it sounds like this is a spousal battle in every house. But in particularly in mine it never fails just as I'm getting ready to take my shower in the evenings is when he decides to do his business he's supposedly been holding off on doing all day. I swear a must in our next house is going to be one of those toilet closest things for the bathroom where the toilet is closed off from the rest of the bathroom. It's going to have double sinks too because he may complain about my long hair clogging up the shower drain but his razor sharp facial hair clogs up the sink and I swear he spends more time in that bathroom getting ready than I do. And he has no hair so I'm not quite sure what takes so long.

5. The Car Charger: I'm not really sure why in this day and age but our cars always seem to only have one car charger. Because he's usually the one to buy them he claims first dibs so I usually wait until he's not looking and then switch the charger to my phone. Whenever we're fighting over who gets to use it on our long road trips he'll stop and pick up another one. Except they never seem to last very long because supposedly I break them all. Because they always seem to quit working right after being left in my car or after my phone has used them does not mean necessarily that I broke them. He always tells me I'm going to buy the next one. But I know I can outlast him on the whole sharing thing so he always ends up buying the next one.

I'm sure the ridiculous battles between us that have continued for the past thirteen years is longer than these five but these childish spousal battles are some of our favorites. What do you and your spouse fight over constantly but find too much humor in driving each other a little crazy that you don't see the battle ending anytime soon? 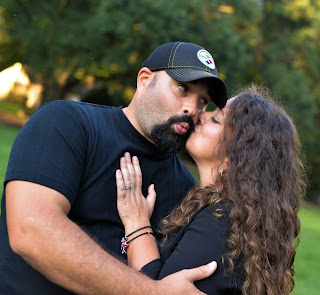 Photo by Sandia Imaging and Photography
Posted by Stepping into Motherhood at 5:52 PM