The first year we signed one of our kids up for a team sport was when my oldest was three. After that experience I said I would never start another one of my kids in team sports again as early as three. It was well, honestly, kind of painful to watch.

She would be interested in kicking the ball for a bit before the game but when the game started she was not interested. She was intimated by the older kids on the team, and the fact that she is not an aggressive child by nature was clearly apparent that year. After that year I looked at my husband and said, "Well, that may be our only experience with soccer. I don't think I can put myself through another season of that."

She didn't play when she was four but when she was five she asked to play because some of her friends were playing so I reluctantly signed her up. After the first game I remember her dad and I were ready to give her an attitude adjustment. She acted like she didn't even want to be there. She wasn't hustling. She was whiney. Now unfortunately my kids have two parents that grew up playing competitive sports and spent the early days of their teaching career coaching so we're not exactly the pat them on the back no matter how they played and say, "It's okay. Good job." We're not complete hard asses either, but part of being an athlete is being able to take constructive criticism .  Four years old or not the poor kid had to listen to both of us get on her about her lack of effort and positive attitude on the field. At that point I said that would be the last season.

But the kid completely surprised me. As I've said my oldest is not the most aggressive child, and I've wondered about more aggressive sports like soccer not being a good fit for her. By the end of the season though she was scoring goals, and she was playing like she wanted to be out there on that field.

Now we're three games into her third season, and it has been so much fun to watch her come into her own. This is her first season playing in the actual league above instructional where they keep score, have refs, and I believe even have a championship game at the end of the season . It's 6-8 year olds so she's one of the younger ones, but so far her team has won all three games.  They have a coach that obviously knows what she's doing, and she's learning so much about how to play the game other than kick the ball in the goal. She's not the best player on the team by any means, but the girl is holding her own. She's scoring goals, she was making passes last game, she's hustling, and it's obvious she wants to be out there.

As someone who never played soccer, never watched soccer, and who found my first parenting experience with soccer far from entertaining, I am loving cheering her and her friends on from the sidelines. It is so neat to watch your kid find her own passion for something. I don't know how long she'll stick with soccer, but I'm totally on board now for as long as she wants to play. The kid I wasn't sure about being an athlete looks like she just may turn out to be one after all.

I love her look of determination in this picture. 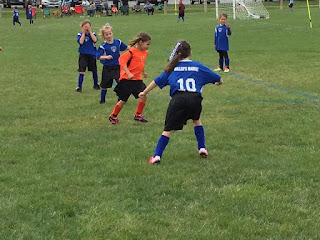 Posted by Stepping into Motherhood at 9:25 PM