Why I Understand Holden Caulfield

It's childhood cancer awareness month incase you didn't know. If you also didn't know childhood cancer only gets 4% of government funding. Children are fighting for their opportunity to live at this very moment. Every day children lose their future and their life to childhood cancer. Every day a parent faces their worst nightmare as they watch cancer steal their child away. Somebody's child out there isn't going to get to live.

Have  you ever watched someone die from cancer? It's awful. It's heartbreaking. It's slow and painful for them and those feeling helpless beside them. Trust me. It's not something you'd wish on your worst enemy, much more an innocent child. I can't even begin to imagine how that haunts you for the rest of your life. Yet I know people going through that very thing right now.

My students are reading Catcher in the Rye right now and finding themselves drawn into Holden Caulfield's lost, depressed world. So many I know don't like Holden because they find him whiney and pathetic. But I never have because he's not just the lost boy of some Peter Pan Neverland world who selfishly doesn't want to grow up. He is a lost boy just existing and too jaded to really live his life. But unfortunately his Neverland is Hell, a world where he's suppose to figure out how to live when fate in the form of cancer took away one of the people he loved most, his brother. He's unsure how to move on with his life, unsure why he got to live and his brother did not.  His innocence and childhood were stripped away from him when he watched what cancer did to his younger brother. You don't easily recover from that. You don't just get over that. You don't just need to grow up and move on from that. He, along with every child, and sibling of every child, that faces cancer, are forced into a hellish adult world an adult hopes to never be in. He wants to be the catcher in the rye because he's seen the hell that exist on the other side of our childhood innocence, and he doesn't want anyone to experience that anymore than any other adult does.

Holden is living in a hellish world where he has to figure out how to live after cancer stole his childhood innocence and left him in shattered pieces much like the shattered window on the night of his brother's death. So I get Holden Caulfield, and I don't think we should be so quick to judge him as whiney and pathetic because coming out the other side of cancer is no easy feat.

I'm personally tired of reading about real life Holden Caulfield's, siblings watching their young brothers and sisters fighting and sometimes losing their battle to cancer. Spread the awareness that it's Childhood Cancer Month and we need more funds for our children! 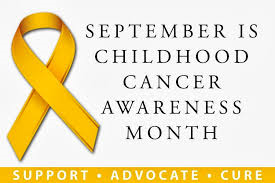