I didn't need my facebook memory feed on Thursday to remind me that two years ago was when I suffered my second miscarriage, the one that definitely marked me in a way I understand now that I won't ever forget. Friday a childhood friend of mine who has also experienced her own pregnancy lost shared this post about miscarriage that generated a nice discussion among moms that lost babies in pregnancy.

I shared my experiences with my two miscarriages, particularly that last one two years ago that left me devastated in a way I had never expected. I shared my fear in the months after that about continuing to try for a third baby despite the emotional storm of going through two miscarriages in the past year. I learned many things. I learned that losing a baby you never met is still a loss you will grieve in your own way in your own time. But here I am two years later and I'm still learning.

Because see first I thought losing a baby you never met couldn't really be that bad. But that day, January 26, 2015 will haunt me for the rest of my life. I understand now that women don't just forget the babies they've lost but never met. Those babies stay with them forever. They define each mother's journey of motherhood in their own just as each baby that came before and after them define her. I thought the rainbow baby that we all hopefully have at some point would in some way make up for that baby's loss. But this is where it all gets tricky in my head. I love my son; I couldn't imagine my life without my son. I think how if I had that baby I lost I wouldn't have had the son I have now or maybe even a son at all as maybe it was another girl. But I still think about that other baby. Was it a boy too? A girl? We had talked about four at one point. Maybe we would have still had Lincoln after that one though and maybe it was the fourth one (guess technically the third and Linc was the fourth).

The process of moving on is not what I expected. I think in my arrogant non experienced way I thought I would eventually just forget that it happened. However, I see now it/they are not something we just simply forget. I think I thought we would just forget because it s (possibly was rather than is) taboo to talk about our lost babies that some don't consider a real loss because it was never a "real" baby. Their existence is real to us though as soon as we see that hope of a positive pregnancy test. 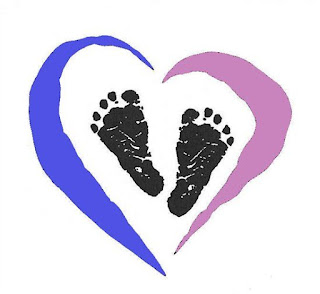 Posted by Stepping into Motherhood at 9:22 PM