I feel like we're rounding this weird corner in life at the moment. Our oldest is about to turn 8. Eight!! How is that we've been parents for eight years already??? Our middle who was my baby for so long is getting registered for kindergarten next month. How is it that she's ready for school already and that we're about to have two kids in school?? Then the baby-he's about to turn a year old already- here in few months our last baby will be a toddler. How is this all possible? Where did our life go? Sometimes I feel like we're spinning on a merry go round and it's picking up speed and our life continues to flash by in a kaleidoscope of short little moments that blur out as new memories and moments quickly replace the past.

But being the moment catcher that I am whether it's through the endless amount of pictures I take or the snippets of our life on record here or in other journals I don't want us to forget the past, even the doubtful moments of struggle. Overcoming those are what reassures me again later when we face doubt and uncertainty once again.

Because here we are with these three quickly growing kids that give our life so much joy and meaning in the home we could raise them in, yet find ourselves in uncertain territory again. Just when we thought we had made it through all the hurdles and twists and turns of establishing ourselves and our life, we're unsure and find ourselves questioning what path we should take from here. This is where I think looking back at the road behind us matters.....

Sometime around this time of the year thirteen years ago I was debating whether to take our friendship a little further. I love you, husband, if you're reading this, and God knows you've come a long way, but not only did you have tattoos and earrings which were "no nos in the Williams daughter dating book" but your life was in the shitter for lack of a better explanation because I'll leave the details out. You were a pretty high risk gamble back then. (2004)

Then a year later again right around this time of the year I broke up with you as you like to remind me even to this day. Honestly, I was a big chicken. I was scared to death. We were talking about moving across the county together, and your life still wasn't in the greatest shape. More so than that though was the thought of being so far from home and my family. Pretty sure everyone was placing bets that I'd be back within a year, but we went. With literally a microwave, a box TV (remember those?), good ole Bettis, and our personal belongings. What do you know? Twelve years later here we still are. (2005)

A year from then-two years from the beginning- your life was definitely a little more figured out. However, how a bank ever approved us for a mortgage loan on poor credit was a risky gamble on the bank this time, but they gave it to us and we got our first house, spending the first night on a blow up air mattress with a cooler as our refrigerator beside us. (2006)

Those first three years which seem so long ago now were so clouded with uncertainty and doubt. They are why the song "Livin on  Prayer" always reminds me of us. We definitely struggled. We struggled with money, with each other, it was a struggle for me being so far from home, you struggled with starting a career in education.  They were not easy years. I would not go back to them, but I think they were valuable in molding us and even being a reminder to us in moments like this.

The next five when we got married and started our family as one of us finished grad school and the other started grad school we began to find our footing and momentum. We weren't as lost or uncertain anymore, but we weren't immune to struggle.  We struggled with money in a crashing economy that sank our home's value and skyrocketed gas prices for our long commutes on top of the added expense of a baby, the struggle of raising a family so far from family would leave us questioning our choice of where to live, but we started to figure it out and got more confident in where we were headed in this life. (2007-2012)

Five years ago though when the houseing market still looked very doubtful from the  market crash of 2008 we listed our house in hopes we'd get to move our girls out of the city before they started school. Unfortunately or maybe fortunately the possibility of selling it was as bleak as it seemed. In about six months we had maybe three showings. Moving was looking pretty doubtful. Luckily in the six plus years since we bought the first house our credit situation was in much better shape and though I was doubtful pursued what you always intended for that first house anyway. We rented it and moved out of the city and into a small town community like we always intended for our family. (2012-2013)

Though the financial adjustment of the move was pretty rough at first we were making progress towards our vision. Graduate degrees were done, had two of the originally planned three kids, we kept the first house to rent it, and bought a home in a small town to raise our family, we were officially vested in a career that guaranteed us a pension, but unfortunately two years ago after a second miscarriage followed by a rough post partum period after the second baby I was doubtful and uncertain on following through with having the third and final baby. Obviously as we look at our three babies now we got past that uncertainty.  (2015)

Doubt and uncertainty has always hovered on the edge whether it's been with our choices, making our dreams a reality, our financial situation, with each other (on top of the health ones with a back injury, depression/mood disorders, and Lincoln's heart and diagnosis scare) Though the struggles at times have been overwhelming and mentally exhausting, we've always overcome.

So here we are...Uncertain because we're not sure whether to stay the course and hope for some good luck or to veer off and select a new, more unknown one to explore other possibilities we've dreamed of but have been too scared to pursue. I don't know what we will do; what we will decide for sure. But I do feel confident in this. It'll work out; we'll overcome and we'll look back at this moment of uncertainty much like I just looked back at the ones that have already passed. If or when we do pursue change I know it will be hard; I know we'll struggle but I like to think at this point we know there's another brighter side on the other side of  struggle.

Next post I'll weigh out the pros and cons of our choices as I've been saying for the past two weeks I would do since we learned it might be time to revaluate our options sooner than we originally thought. 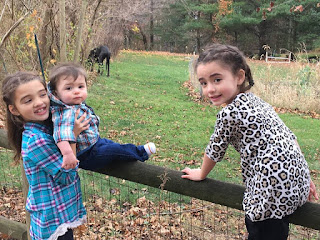 Posted by Stepping into Motherhood at 2:10 PM