Summer is drawing to a close. This has felt like a long summer on one hand and a short one on the other. Our actual summer vacation from school was only eight weeks when it's normally nine or ten; however, because we worked half the school summer vacation if we're not looking at summer as the actual break from school but more so the stretch of time with nice warmer weather (especially after the winter we had) and the time for hanging out with friends and family it's felt like summer since we went to the beach in Alabama in April and won't end for us until we go to the beach the weekend after Labor Day weekend, which makes it feel like an awesome long summer.

It really has been an awesome summer. Summers haven't always treated us so great in the past. My most memorable summers before this one were probably the summer I got married and the two summers after my babies were born. 2005 was my first teacher summer and we spent it moving and adjusting to moving in with each other, and I'm not going to retell that disaster story but it was even more of a disaster than what I've shared so it does not go in the books as a good summer. 2006 was better but stressful. We bought the house in the city but thought the best financial decision to have our funds to close would be to be nomads for the two months of summer vacation so we had no set home and just traveled around visiting various friends and family while trying to deal with paperwork from out of town. Not the smartest decision we ever made but another one of those let's just make this harder on ourselves because it's going to save money. 2007 was great because we got married and went on two honeymoons with one to Mexico and one to the Finger Lakes. 2008 was a great summer too because we found out we were pregnant with Averi and took one of our best trips, our didn't know it at the time babymoon two week trip to California. 2009 was Ave's first summer. 2010 started two rough summers in a rough. My car broke down leaving us stranded three hours from home for three days, and it turned out it was going to cost us way more to fix it than it was worth. While I was freaking out about that financial disaster Nate was quitting the City school system and we were anxiously waiting for a job offer for him with the county. 2011 was the summer of Nate's truck accident that tore up his back and we had to fight with an insurance company all summer to repair his truck and get him the treatment he needed to fix his back and my grandpa passed away. The summer of 2012 was Kenz's first summer and my last full summer off with my kids. It was a great summer. The summer of 2013 was quite the opposite. 2013 was the year I was a mental angry, bitter mess. Again no need to tell that summer's story again. Last summer wasn't too bad; it kind of falls in the middle. Nothing too rough comes to mind when I think of that summer but it doesn't necessarily stand out either. And now for the summer of 2015.

It was the summer about people. Making time for family and friends is a top priority to me, and I know many share that same priority. But in our case many of our closest friends and all of our family are long distance. It's very easy to let time and distance get between those relationships. I've seen relationships with limited distance fade over time due to lack of connection between parties. But I am so adamant about making plans that overcome the challenge of distance and time.  I don't want to use distance, lack of time or money as an excuse because the relationships in our lives really are the most important things.

We had that awesome vacation of just the four of us in April but then we met up for a great weekend with a bunch of Nate's college friends, including one of the groomsmen in our wedding that we haven't seen in a couple of years. We got to go to two O's games, including one with again friends of ours that we haven't seen much of since we've moved out of the city. We were able to spend a day or so with our two really good friends and their families down in Virginia that we do usually manage to catch every couple of months. We've seen and hung out with and have more upcoming plans to hanging out with our Baltimore family friends including upcoming parties and a beach wedding celebration. We're starting to make friends too here in town and it's been great hanging out with them too. With my parents coming out this week it will make for two weeks with my family this summer, five weeks with the girls' great grandmother, and a week with Nate's family.  I have two uncles, one grandmother, and my cousin and her family unfortunately that I didn't catch this summer, but beside them I feel like we've been able to catch everyone or we will here in these last few weeks of summer's plans that really matter to us (and I need to make it to see my college roommate again soon). Those we missed we hope to catch soon.

We hit our usual family traditions of summer fun and added a few new things with the drive in, down into the Inner Harbor for the Science Center, went camping, spent time at the ball fields between Nate and Ave's schedule, golfed, fished, went to the town carnival, saw a concert, attended a wine festival, binge watched more TV shows than I have in my entire life combined, did a bunch more work on the house than we planned, and spent several evenings outside around the fire.

There were dark moments in this summer with the biggest one being saying good bye to our Bettis and the dark cloud that hangs at times with the knowledge that there should have been a third Glenn baby this summer. I've spent time on the sorrows of them both, but this post is for reflecting on the great things about this summer because there are many things that were great and to be thankful for, and after some previous rough summers this one deserves a positive reflection in the memory book. It really was a great summer of quality time with family and friends. We watched this Ted Talks video the other day that said something that I've believed in my heart for a long time and that is this. "On our deathbeds we won't look back at our lives and wished we worked more and took off less time. No we will wish we made more time for the family and friends in our lives that matter. That is what we will regret." And I've known that for a long time which is why we live the way we live, and there are no regrets here in that choice. That time with family and friends these last few months is what made this summer.

Hope your summer was great and memorable. 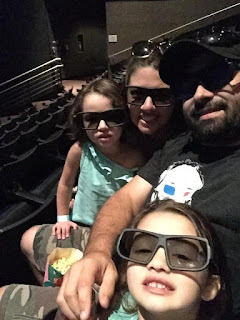 Family day at the Science Center 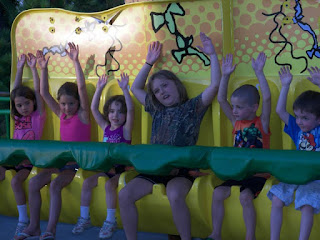 Worlds of Fun with the Williams Cousins 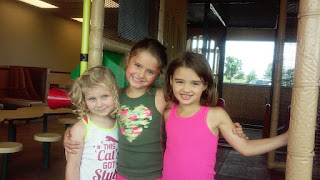 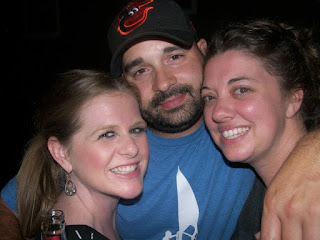 An awesome night with my college bff 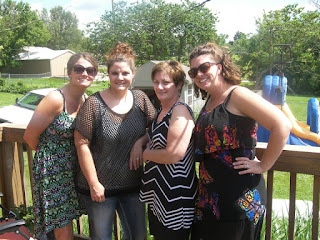 My parents with their three daughters 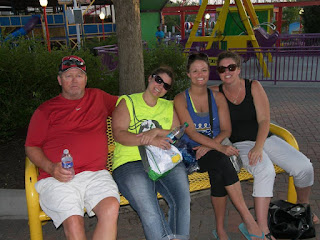 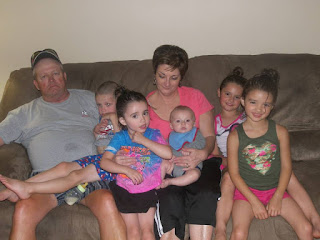 My parents with their five grandkids 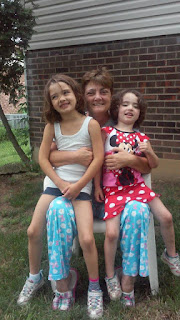 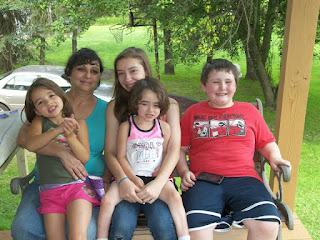 Nana's back porch with Grandma and their cousins 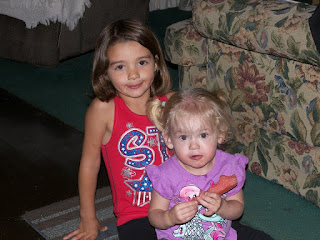 Taking care of her baby cousin 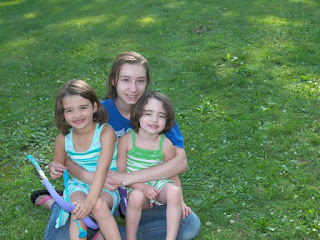 They love their big cousin 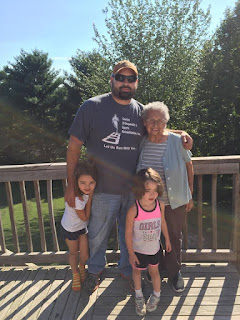 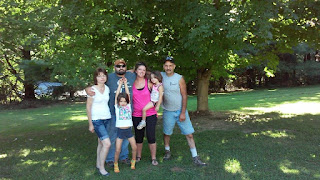 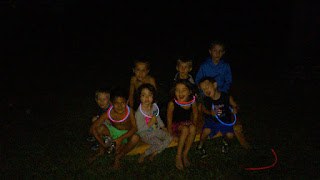 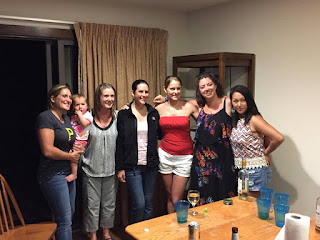 An great weekend with college friends 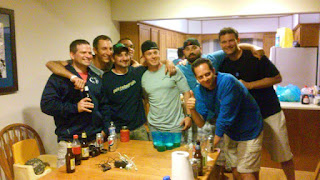 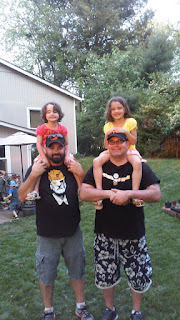 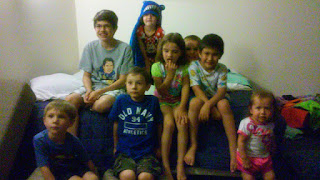 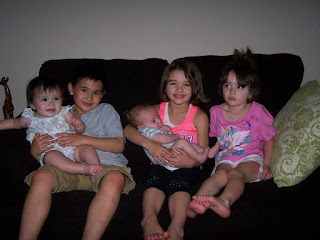 A great weekend with our Virginia family (Pantanos and Quears) 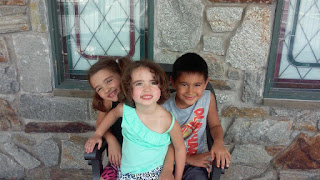 Them and T
And their mommas 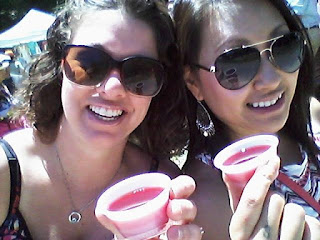 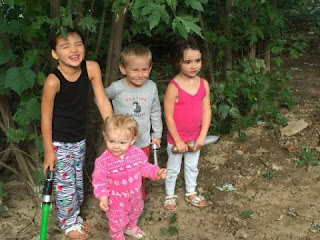 Another annual Watkins Glenn camping adventure
and the drive in 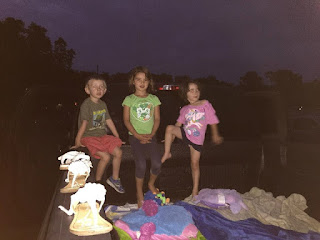 Travel...We will get There
Posted by Stepping into Motherhood at 5:43 PM