I tend to load my plate too high so sometimes some of the mishap that befalls me is my own fault. I see some of my friends do it too, and it's not that we're competing to be superwoman. It's just that we really just like to be busy; we like to be on the go; we like to know that admist all the chaos and demands that come in life that we are living our life to the fullest.

The woman of today awes and inspires me. I look at my friends, sister, and cousin who many not only balance full time careers and motherhood but put themselves through school, dedicate themselves to events in their communities, to their own personal hobbies, or second jobs that aren't really jobs to them. They throw themselves into projects at work, at home, in the community, for themselves and their families. These aren't just women that make it look good on facebook either;  I know them personally. They really are super women on most days; some days I feel like I do a pretty good job running in the race with them at my own pace (because the competition is really just with ourselves, right, ladies). But I imagine when I say some days I feel like super woman and other days I feel like a super disaster I am not just speaking for myself.

Some days that damn cape just does not work and we cannot get off the ground. I'm not sure when the downhill spiral of everything tumbling out of my control started. Things with the houses and the race to the finish line at work have been coming at me like fast balls I can't swing at fast enough (I shared that here ). But the epiphany of "oh, shit, this is not going to be a good week" for whatever reason usually happens at Wal Mart. I seriously need to start avoiding that place. You know that moment when your kids who you usually brag about getting along so well decide to not just fight with each other in the store, but start duking it out with elbows at each other, while you're in the checkout line with nowhere to escape happens. Seriously I've never seen the girls do more than play wrestle, and they were about ready to  take each other out. That was about the moment at the start of this week when I knew it was not going to be pretty. Then when you hit the middle of the week and are seconds away from just sitting down in the middle of your driveway at 6 in the morning and having a good cry because you can't find the keys to your car and have no spare ones and think, "Okay, I know they're just keys but this is going to be the final thing that broke the camel's back. I'm done. I give up. Let's chalk it up as a disaster week and just move on to the next." The keys by the way ended up being under my daughter's booster seat because when I got home to deal with the books that fell all over her and then all over the middle of the road the night before that must have been where I set them while I tried to repack them.

In many ways this week I feel like I have been far from that superwoman who has it together. After both of us trying to not only close out the school year with grades and paperwork but packing up and moving our stuff to new locations for next Fall, last night we worked until almost 11 o clock after that at our rental house. We had to settle for yucky drive thru fast food because nothing is open on a Wed after 10, then by the time we got home I realized they didn't put the girls' corndogs in the bags, and literally at a little after midnight all four us, yes including our children, plopped down in our bed either still in our clothes or in some cases just our underclothes because it was way too much work to  think about bathing or even  pajamas. Yes, mother of the year right here, I know.  We are beat, exhausted, frustrated.

Our neighbors at our city house told us we are busting our butts to maintain that rental house and maybe it was time to cut our losses and just walk away from it. Sometimes I'm all for just quitting on it. Lately it's costing us more money than we're making from it; we are down there constantly it seems like fixing something. But all the work and I mean sweaty, hard, back breaking work (you should have seen the two of us just carrying appliances in and out of that thing the last month) we've put into it when we lived there and now as landlords will seem like such a waste if we short sell it or let it foreclose. We've worked so hard to bring Nate's credit score up well over 100 points from poor to almost excellent to just quit.

So for this week I have miserably failed at being superwoman and wonderfully succeeded at being a super disaster. But it's okay. We all have these moments. It's not even the having it all together that makes us superwoman anyway; it's the surviving , the getting back up, and the persistence to just keep at it even in the moments we're failing. 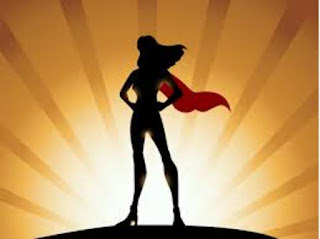 Posted by Stepping into Motherhood at 1:38 PM