Last April was an April I probably won't forget for a long time. It represented the loss of both our pregnancies in different ways. It was the due date of the first lost pregnancy and it would have been the gender reveal month of the second one we lost. Now in a twist of irony it is the month we are expecting our baby boy to arrive any day. Just as I was unfamiliar with the true emotions that follow lost pregnancies, I am unfamiliar with how my thoughts and feelings will change from here. In all honesty before my own experiences my thinking was as long as  you get a viable pregnancy that results in a baby shortly after those lost ones will seem insignificant. Is that really the way it is? It sounds so callous now, but for now I know it has marked my journey to here at the end of this pregnancy.  I know my perception of when a baby is a baby and when a mother becomes a mother is now much different than it was even two to three years ago when I had already experienced motherhood.

I feel like I've spent so much of this pregnancy afraid I'm going to lose him too. First it was getting through the first trimester without another miscarriage. I had to talk myself into the emotional risk of giving it one more shot at baby #3 as it was, and if we lost a pregnancy a third time I was mentally preparing myself to let the dream go. Then just as we made it through the first trimester and we found out he was a boy, we also found out there's a tumor on his heart. At first it was the concern that it could grow, block the function of his heart, and stop it. I never experienced anxiety that jolted me awake at night, left me sleepless, made me feel like I couldn't breathe and was having something like a panic attack like the weeks that surrounded that news and the first few follow up appointments. As the weeks turned into months and we followed up with routine cardiologist appointments even though the tumor did grow it was only growing in proximity to his heart and his heart continued to function as if nothing was there so the cardiologist has become more convinced it's a type of heart tumor that goes away after birth, which is great. However, they cannot confirm that until he's here and unfortunately that diagnosis is not that simple either as 50% of the time those tumors are associated with a genetic disorder in which tumors will grow on his other major organs like his brain, kidneys, and skin and can cause a variety of other minor to possible major problems but like most disorders it has a whole spectrum of how severely it can manifest. They will of course give him testing for this when he's born to try to determine if this is something he/we will have to face or can rule out. As much as that scares me I try to see some positive. One, is that there are way worse debilitating genetic disorders than this. With having such an early diagnosis much earlier than some who don't show signs until childhood he will get early proactive treatment which should keep the severity and problems any tumor growths could cause to a minimum, giving him the chance to really just be like any other kid (with a few extra doctor visits and tests than normal).

Just as my anxiety tapered down with his uncertain diagnosis I went to labor and delivery at 30 weeks with cramping that turned out to be due to a positive bacterial infection that even though they treated me for it with antibiotics I need to make sure I'm administered antibiotics 4 hours before delivery to avoid passing the harmful bacteria onto him. It's harmless to me and common in about 30% of pregnancies and as long as he has the antibiotic he should be fine, but of course if he's exposed to it there are several different serious complications that can result. They also weren't sure if the infection was causing preterm labor so they put me on bedrest for around two weeks to get us a little further along. Even though I wasn't released back to work until 34 weeks when the cramping went away around 33 weeks I was feeling pretty confident we were going to get through March without having a baby.

We did and April came. And here we are a year later in April again in the final month of pregnancy. My usual Braxton hicks contractions appeared to have changed in intensity that first day of April. However, I called April Fool's on him and decided to go to bed rather than check to see if it was the start of real labor. Good call on my part because they tapered back down the rest of the weekend. Then Sunday though there were other changes happening that are associated with early labor but early labor that can still be days to even as far as two weeks away, but then I thought I had possibly ruptured membranes about 10:00 on Sunday night. So at my sister's advice we made a practice run to the hospital that ended with a return trip home at 3 am with a false alarm.

I know technically we could still have a good three weeks as I'm just now 37 weeks this week, but I came home and kind of hit a wall of frustration. Maybe it's just because I'm nine months pregnant with fake contractions on a daily basis so I hurt from about mid section to the top of my legs whenever I'm up and moving around now, and it's just really uncomfortable to sleep now. As much as I complain about the physical aspect though I think it was more the mental aspect that dragged me down. I'm tired of waiting, worrying, wondering.  I just want to see him, hold him, know he's okay. I'm sure I'm still going to worry once he's here. Don't we worry about something and everything with any and all kids we have? But there's no moving forward until he's here.

I keep telling myself I've waited so long, over a year and a half since we started this journey to baby #3 and a family of 5. It's almost here. I can wait a little longer. That day when we will finally meet is oh so close.

I've rocked and nursed all my babies in this rocker and it's been empty for too long. 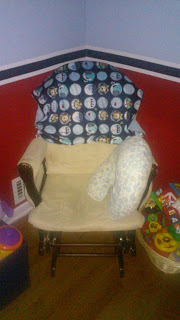 Posted by Stepping into Motherhood at 4:51 PM