Cancer and the Warrior Within

I don't know if cancer has ever walked into your life. It has mine. Once it does you don't walk back away from it the same way. Even as a twelve year old kid when I had to watch my dad and my cousin lose their brother and father to cancer that time in my life marked me. I get and understand now that I'm a pretty emotionally overcharged person, but that's part of why as even a kid when I watched my uncle lose his life to cancer at only 41 years old I understood how truly unfair life is.

From that point on I've spent my life wondering when and who cancer was coming back for. Though it showed it's ugly head briefly for a year with my aunt we were fortunate in it was caught very early and taken care of. Other than that we've gone 23 years since that last battle. But it's claimed one of us again. Possibly two in the same month.

I'm stunned. Stunned that it really did come back for one of us again. Stunned at who it claimed even though I always feared it's returned. Stunned that it struck us again so young. I'm mad. Mad that she has to go through this. Mad that my family has to watch someone they love go through this again. I'm scared. Because I've seen the worst of what this monster can do. I feel so many emotions right now for this person that I love very much. This person that I have spent very little of my life without and has been such a huge part of my life for as long as I can remember. But despite being stunned, mad, and scared, I'm also hopeful because this monster didn't come back for the weakest of the weak. It came for the strongest of the strong. The strength of this person has amazed me since I was a kid. We were family, we were friends, but this person is also one of the most the most inspirational people in my life. She can and will beat this, and she will come out the other side even stronger than she already was. Because, little brave, those of us that know you, know there has always been a warrior within you. 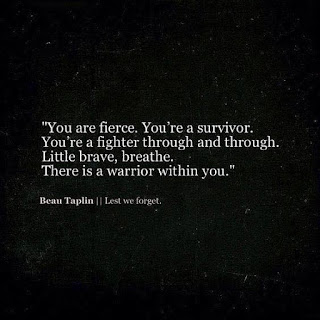 Posted by Stepping into Motherhood at 6:25 PM