It's Going To Be Okay

Shortly before we found out Lincoln was a boy I had a dream. It was the dream that not only told me he was a boy-which I didn't believe because I kept thinking we were having three girls- but that something wrong or troubling was coming but in the end it would be okay. As those of you that follow this story know not only was the dream correct in telling me he was indeed a boy but that he had heart tumors that first we had to worry could cause fetal death if hydrops developed, and then once he made it through the scariest part of the pregnancy  we had to worry that it was connected to a genetic disorder that would cause tumors to grow on his other organs and cause a variety of other problems for the rest of his life.  They told us he would have to go two years without any other tumors or evidence of the disorder appearing anywhere else on his organs before they would dismiss his case as a rare occurrence with multiple heart tumors that were not in connection to the disorder.

I still experienced a lot of crazy anxiety during that pregnancy but let me tell you that dream is what reassured me time and time again. I believed in it. After my miscarriages I prayed and prayed for something to reassure me about getting through a third pregnancy. Though I have had "visitation" dreams I had never experienced a dream of something in the future like this, and I haven't had one since.

Though I was confident months ago that he was going to be okay, I kept waiting to "experience" that moment in the dark nursery where I knew it was all okay. Though I would sit in that dark nursery rocking my baby boy many times, thinking how I knew in my heart he was okay, and would even ask myself was this possibly the moment I dreamed, it never "felt" like that moment.

Two weeks ago he went for his last EEG of this first year rotation. A couple days ago Kennedy Krieger called me to tell me once again that he was clear of any signs of seizure activity from brain tumors. And that he does not need to have any more EEGs! We're suppose to follow up with Kennedy Krieger this summer, and I'm not sure at this time if they'll have him undergo organ scans like he did at birth again or not. Either way I continue to be confident my baby boy is okay. Not only do I thank God for answering all of our prayers but for even answering the one to ease my anxiety in some way. That dream carried me through my pregnancy and beyond. I truly believed God sent me that dream.

Except then something happened the other night. My cousin that I grew up with was diagnosed two weeks ago with breast cancer at age 34. That has obviously weighed heavily on my mind now these past two weeks. Then one week later my older cousin (my sisters and I are the only other three girls on this side of the family tree)  received the news she also very possibly has cancer so now we are also waiting to hear her prognosis. My mind has been distracted and worrisome of late to say the least.

On Sunday night after we found out our water heater was leaking again for the fourth time in four years, I was tired from a quick weekend trip up north to see my husband's family, and it was almost an hour past my own bedtime, and my fighting daughters who should have also been in bed woke up the sleeping baby I was just ready for one of my own mommy meltdowns. So I grabbed that screaming baby out of his crib and sat there in that dark nursery to rock him. Of course my mind was still wondering if my cousin with the breast cancer had received her PET scan results yet because we were still anxiously waiting to make sure the cancer hadn't spread and it was contained. But as the quiet and peace finally settled around me in that dark nursey I told that sleeping baby, "You know it's all going to be okay. We're all going to be okay." Within moments I realized right then was the moment of my dream! But the "going to be okay" wasn't about my baby boy and his heart and this possible genetic order. It was about my cousin, my family, and this damn cancer. All this time I took the moment in that dream to be about the baby and his heart.

Was the dream meant to reassure me about him after all? Or was it meant to reassure me now? I don't know. But I do know this. I was meant to believe in it. Believe in it this whole past year when I thought it was meant for Lincoln. And believe in it now when I realized maybe it was meant for this moment with my cousin(s) and family. I've always felt that God talks to us and sends us messages if we believe and listen. He's there. We just have to believe and we have to look and listen. I'm listening and I believe. Thanks for always praying for us. We will continue to need them in the months ahead for my cousin as she begins chemo, for my one and only older cousin as she faces her own cancer path, for Lincoln as we hopefully continue working on ruling out this genetic disorder this summer and revisit his cardiologist in May to check on the hopeful continued shrinkage of the tumor he does have, and for all of us on this journey with the ones we love. 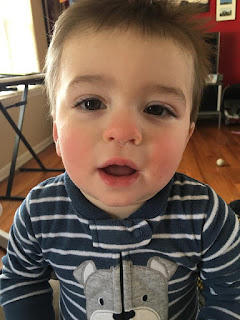 Posted by Stepping into Motherhood at 4:18 PM