The Commercial Break of Life

I can't remember where I heard this from but it always stuck with me. "The happy moments of life are the commercial breaks." I look back at these past three years and there's kind of a dreaded truth to this.

Three school years ago is when I went through two miscarriages in five months. There were months after though that were like the commercial breaks of living life. I remember that spring and summer finding contentment with where I was in life and with our little family, though that nagging question of if and when we were going to have a third child always hung around me in the dark corner of my mind. Now that I know how that story ended-and it did end happily- I wish I would have let myself enjoy that commercial break a little bit more.

Then we got pregnant and it should have been a joyous commercial break as well, but it wasn't. I spent too many nights that school year up in the middle of the night while everyone slept eating yogurt (really loved it while I was pregnant this last time) on the couch, worrying about my unborn son's health. Then after he was born and we made it past the worst part of the danger with his heart concern, I had a wonderful four month long commercial break. I still think back on those four months almost a year ago now and all that time I had to just enjoy my three kids and be a little less stressed than I had really been in a long time. It really was a wonderful time. Then the commercial break ended.

Throughout this third year, the job has really been sucking the life out of me (as well as my department as two just said here's my two week notice and left in the middle of the year so obviously the stress of this job is getting a little ridiculous). Then my grandpa died on my birthday and it's times like those that it's hard to be far from home and away from your family. That was followed by the worst mental crackdown I've ever had or maybe it was the best one because I dropped everything and sought help right away because though I've always "managed" before when my anxiety and stress get the best of me, I couldn't even think about how to move forward. I got better and found myself able to "manage" again. But then we got told my husband wouldn't have his position next year so though they have to give him a position somewhere when you've worked your butt off the way he has you don't just want to be thrown into some random situation into some random school. A month later there has not been one hopeful positive sign for a position for him next year. So once again we felt defeated. Who knows where he'll be next school year and I need a new position myself. I have to get away from that hour plus commute. It gives me way too much time in my own head. Though it may lead to great writing content on here sometimes, I have to get out of there. Especially lately. Then more news came this week and now all of that trouble of the past three years seems like the commercial break compared to the road ahead.


I feel like a pretty blessed person. I don't look at other people and think why do they have it easier  because I know so many have it harder than me and mine. But damn why are some people dealt such a harder hand in life than others?  I know I shouldn't be mad about that, but I kind of am. I talked to my dad this week, the guy I go to when I need someone that can get me out of my own head. He's had a tough year. After growing up without his mom who passed when he was two, he lost his dad this past fall. Then he lost one of his good friends a few months later. This year has really sucked for him. Even he said, "Can't we catch a damn break."

One thing I've learned in my short 35 years is when that much needed commercial break comes hit the damn pause button! Don't fast forward to the next dramatic, gut wretching, having you on the edge of your seats scene of the movie that is your life. I know we all want to know how the story plays out, we want to see the anticipated conclusion. But next commercial break just hit pause. Slow down, take deep breaths, close your eyes and savor that moment, lock it away in your memory box to pull it out when the movie of life resumes. Let's not wish our time away. Let's not let our anxiety of the unknown and uncertainty steal our happiness of the moments that make life totally worth living.

I always think before our life here on Earth and after our life here we watch our whole life story like a three hour Hallmark movie where we laugh and we cry as the characters navigate their journeys. I always like to think just as if we were watching any other movie we see the trials and challenges as the defining moments that make ordinary lives extraordinary; that despite the heartbreaks in the story line it stays with the audience long past the concluding credits, inspiring them to look at their lives a little deeper and live it a little differently.

Life is just in a hard place right now. I know we won't stay here forever, and we will come out the other side of our trials and challenges stronger than before so for now we just pray for the journey ahead and for that next commercial break to get here sooner rather than later. 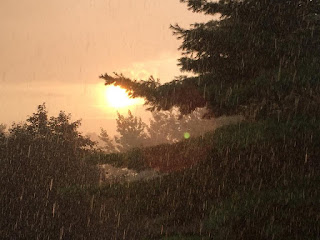 Posted by Stepping into Motherhood at 11:08 PM