So two stories here today of my wonderful daughters. First, let me remind you that I grew up one of three girls. However, rather than fight like girls with backstabbing and badmouthing one another, my dad just let us duke it out like boys. My one grandmother once told my dad her was too rough with us for rough housing and wrestling with us and he treated us too much like boys, but I think Dad's opinion on the matter won over grandma's. My mother would often get mad because she'd come Saturdays afternoon from work to find my little sister and I at it again, wrestling around on the floor while my dad and middle sister just sat on the couch cheering us on. And sometimes it would be just for fun, but sometimes not so much. And my little sister probably could have kicked my a*$ anytime she wanted excpet she'd get mad, I'd keep instigating her to the point she'd be too emotional to really have a good shot at me. And to this day we pretty much know we'll get truth from one another whether we want to hear it or not rather than typical girl behind the back talk. Tattle telling was just no in our family. You settle it yourselves and don't be a tattle tale. We were not raised to be the bully but we have all three had our moments of "fighting" back. Some would say this was bad parenting from my parents, but I don't look to do it much different.

Just recently the girls have gotten to the age where they fight with one another. I hear everyone else's horror stories of their bickering children and I guess my little angels are no different. So as I've said before Kenzi is a little fiesty one. But sometimes she's a bully. I don't feel like I ever bullied anyone besides probably my little sister (sorry, Tam), and I hope she's the same way. So for the most part I think she gets this from me. So Averi wouldn't let her play with her sand castle today at the playground. Well that made Kenzi mad so she kept hitting Averi on the head with this stick. Averi, being the very sweet, gentle kid that she is just kept tattling on her. Of course I'd tell Kenz to stop, sat her in time out, but she still kept doing it. So I finally say, "Averi just hit her back and she'll probably stop." Well, my sweet child ends up a stick three times the size of her sister's and just whacks her in the head. Whoops. I'm not sure that's exactly what I meant, but she is kind of mean to Averi sometimes and she didn't bother Averi again the rest of the afternoon. So you know. They're sisters; they are going to fight. Averi needs to learn how to stand up to her little sister. Next time I might tell her to grab a smaller stick though.

Then my next "parenting" moment came at bathtime. Averi always gets in the tub and decides she needs to go pee. I had the tiolet covered with the rug I always pick up now because my floor always gets soaked at bathtime so I tell her to go use our bathroom. She's taking forever so I go to see what she's doing, and she's at the tiolet trying to pee like a boy! First, she peed all over my floor! Second, where did she get the idea of how boys peed? Third, I thought because I had two girls I wouldn't have to worry about the penis and vagina talk for like a couple more years! Fourth she raced ahead of me back to the bathtub and when I find her in there she's sitting on the edge of the tub, acting like she has something to aim, and peeing into the tub on her sister! I don't know anything about starting this talk. When she was at the other place in the fall, the thing I hated was that there was one bathroom for boys and girls in their classroom with no doors and with ten plus kids in there I did not feel it was very well supervised at times. Nate closes the door. Trust me he liked to hide from all of us in there. So how do I go about this conversation?

So those were my adventures in motherhood today. 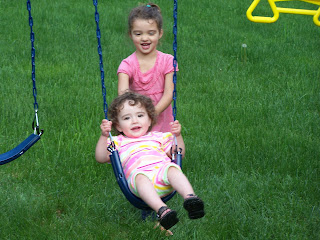 They share sisterly love more than they fighting though thankfully.
Posted by Stepping into Motherhood at 9:24 PM