Walking in these shoes is HARD. How do you do it?

It's going to be a loooong week when on Monday, the FIRST day of five, you are more frustrated with the papers crowding your office desk than the actual crazy, ready for the summer obnoxious behavior of adolescents. It's a long first day of the week when you realize your pants are falling down around your knees because about two hours ago you were going to change them and got to the unbotton part and that was it. It starts to feel like the day that never ends when the only glass dish that has a lid falls to a shattering mess on the floor and you just want to throw yourself down on the floor in a crying, screaming fit, when the one year old escapes her bedroom to end up crying because yes, that mess from the broken glass that hasn't been cleaned up yet, she ends up walking through in her bare feet. It's going to be a long week when it's only Monday and I'm already frustrated to the point of dropping the F bomb (which I rarely do), and when I finally sit in the chair to rock my baby and I go to wipe my eye from crying only to realize I have small shattered slivers of glass on my hand from dusting off the baby's foot and have now stabbed myself in the eye with those little glass slivers. It's only Monday night and I feel like this could be the week that never ends.

I'm sure every year I'm ready for the school year to be over, but I don't think I've ever needed it as desperately as I do this year. We knew this year would be tough because Nate would be in grad school full time with an accelerated program. He has had class every other, if not every Saturday for a month or so at a time, and on Wednesday nights, and then homework CONSTANTLY. It was our first full year with two little kids at home and no nanny there to help (someone at  your house can really maximize your hours in a day.)Then when we realized we'd be making the move we've been hoping for for three years, we knew that would make it even tougher. Then because we moved we incurred unexpected expenses, traded in a reliable vehichle for one on its last leg, and never saved what we needed to cover the summer. So starting in March I added an additional 5 hours a week of work to my schedule to try to make up some of that money. Now starting my third and last month of this, I am wondering how do women with small children that work and don't get home until 6 every night for twelve months a year do it?!? I couldn't do it; I couldn't walk in those shoes. You are some strong women, whoever you are. The guilt, the exhaustion, the frustration, the feelings of being stretched so thin. If it wasn't for the fact that I know this is only temporary I would probably cry myself to sleep every night. I get six hours of sleep a night because ten o clock is the first chance I get to sit down.

Poor Averi wanted me to come push her on the swing tonight, but I was trying to finish up something I put off all weekend because I spent Mother's day just being mommy. Then Kenz just kept whining and crying. Finally as I was sitting there in the dark, rocking her I realized poor baby. "You haven't seen your momma all day." I pick her up a little after five, we get home after six, it was dinner/dishes/bath rush and then time for bed. I barely see her and for the last two months I feel like this is how every work night goes. I'm use to having more time with my children; being home with them around four and having time to play before the whole nightly rituals. I think this is part of what has frustrated me so much with my job too. I hate getting up early but it was always a trade I was happy with in order to have afternoons with my kids. I deal with the awful behavior and attitudes and criticism because it seems worth it for schedule that allows me more time with my kids. But if I'm going to have to add more hours to my day/year anyway then I'm losing out on that benefit and with that lost my tolerance for some of the negative aspects of the job. I just feel that I have been so distracted with everything that keeps life moving that I haven't had a chance to enjoy my kids.

I was watching Averi fix her hair the other day and I was telling her how she's gotten so big. She's so independent and for so many ways thank God. But she's growing up so fast. She helps with her sister so much. Kenz is just if not more so independent. She wants to keep up with her sister and at eighteen months, she can go up and down the deck stairs like a pro. She waves bye bye to me each morning, and I know she's fine. But I hate that I see so little of her during the week. Bedtime is our time. I haven't rocked Kenz probably since last year but because it's been so busy these last few weeks I'll usually sit and rock her now. It's our special cuddle time and then I do the same with Ave. We lay in bed together and have girl talk, which is really four year old talk and lots of "I love yous". I want to spend more time with them. I need this year to be over. Now; about twenty two school days sooner than it's going to be. I'm having a really hard time making this working mom thing work this year. I know this will pass and it is what it is, but it's just a tougher road to travel at times than I thought it would be. This time of them being little girls is going to be over in a blink, and I'm so afraid I'm going to look back on it and feel like I missed it; that I didn't make the most of every second.

One of many mom's day photos 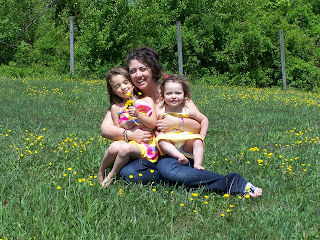 Posted by Stepping into Motherhood at 10:50 PM