First Trimester and Boy or Girl?

We took the girls with us last week to an appointment of mine. It was there that they saw and learned for the first time that they're getting a little brother or sister in the spring. They were of course excited. Kenz was concerned about not being the baby anymore.  Averi was worried and kept asking if this baby was going to disappear too or when I'll know if I'm "really" having that baby.

It's been a busy first trimester with two ultrasounds and two thyroid tests already, and so far everything has looked good. I was in the doctor three times the first four weeks I found out. After the miscarriage in January which was due to not being on top of my thyroid issue, I was very adamant about being seen right away and even questioning the blood work results to make sure they had my medication dosage right for pregnancy.

Just as I worried there have been times of anxiety where if one little pregnancy symptom disappeared or I didn't "feel" pregnant for a few hours I started worrying that something was wrong. It drives me a little crazy, the paranoia I will be glad when I can start to feel the baby move in a couple of weeks. Course I remember how even with the girls I'd get anxious if they were still for too long.

Plus one afternoon, I started feeling really light headed and dizzy. It reminded me a lot of how I felt after I had Kenzi, who I was borderline anemic with, but had complications at birth in relation to it, and spent a day or two feeling completely out of it and light headed. I'm waiting on bloodwork back on that.

On one hand as much as I want this kid here so I can quit worrying (because you know how much that stops after delivery). But on the other hand I'm thinking yes we still have a little over six months to get ready for our whole lives to be tipped upside down because even as excited as we all are if you have kids you know how much work a baby is! Between the minor complications I had after Kenzi was born though, and then her colic problem or whatever her screaming nonstop problem was I'm also a little traumatized to what comes next. LOL.

But I'm in a good place right now, and I really think I'm ready for this whole mom of three thing now. They say everything happens for a reason, and I feel that as a family and me personallywe are in a much place than before to take on this big change. Where I've been hesitant before about how much I thought I was ready for three or honestly if I even wanted three (husbands been the big pusher for three), now I am definitely excited and can't wait to meet him or her. He's even mentioned trying to talk me into four! We better see how three goes first! And I'd like to retire at some point.

As for it being a him or her. Obviously, Daddy is hoping for a boy. Averi wants another sister. Kenzi I think kind of wants a boy because then as she says, "she gets to stay the only baby girl". I want. I don't know really. After everything we went through to get this point, I just want a healthy happy baby. I really am kind of split on gender and here's why. I am one of three girls; I am raising two girls now. I am fairly confident in how to be a mom to girls; I think sisters are the greatest thing ever. I think it would be so fun to raise three sisters.

But on the other hand, with three girls I worry about there being sides and one being left out (my sisters and I are guilty of this).  I think with a brother Kenz and Ave's relationship will stand a better chance of staying as strong as it is. Daddy also already has Daddy's girls  and it'd be kind of nice to have a momma's boy. Plus with growing up with no brothers I kind of want to know what it's like to live in a house with boy, other than the Dad. It'd be one less wedding expense, and as the youngest and third kid we won't have to stress as much about enforcing fairness with the rules like we did the older sisters.

I guess we'll find out in about two months though. I would love to hear your guesses or name suggestions. I have some of those in mind to share at some point too.


My oldest use to sing "Hush, baby, don't cry" when her little sister would cry ALL the time. 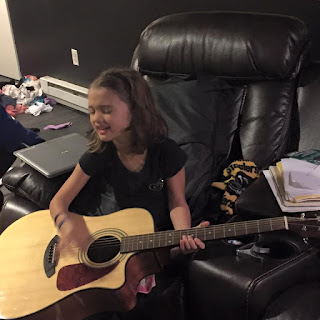 She's practicing to help sing the baby to sleep too. 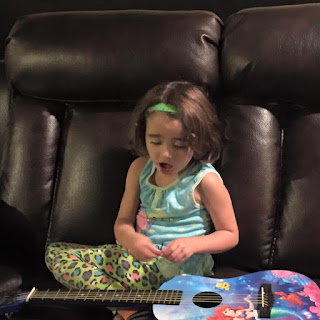 Yeah, Daddy's girls. Who do you think teaches them to play guitar? 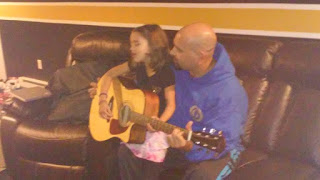 Posted by Stepping into Motherhood at 6:42 PM