I am not one of those people that rolls my eyes and says all those weird nosy things about people with four, five, six, or even more kids. In a way I envy and am in awe of them. My dad is one of six; my mom is one of four. I've had friends that have been one of four, one of five, one even of ten! I love the idea of a big family. So many siblings, such huge family gatherings for holidays and big events, so many people that are all a little different in their ambitions and dreams but share the same love for each other, so many children and grandchildren to visit us when we're old. I'm in total awe of those parents that balance four, five, six or more kids. I feel overwhelmed with my two sometimes!

Even though my husband has definitely dropped the hint about a possible fourth maybe, I just don't think it will happen. It's not even about if it's a boy or girl because even if number 3 is a boy I'd actually be more inclined to be talked into having a fourth in hopes he could have a brother close in age the same way the two older girls have each other. I love sisters so four girls just sounds like a whole lot of girl fun to me (minus the expense of prom dresses and weddings!) So a part of me would love even more kids than three and the huge family of six or so. But then there's the other side of me that sees it as likely not and here's why:

1. Money: I'm sure those that know me will get a kick out of this one. But long ago I only budgeted my life for three kids. When I've looked at saving for college, saving extra for retirement on top of our pensions, on daycare and activities it has all always been planned around three.

2. Selfishness: While a part of me wants a larger family; there are some things for myself I don't want to put on the back burner anymore or in the future. I want to focus on reclaiming myself. Not only does pregnancy and breastfeeding take over your body, and there's the physical aspect of yourself you'd like to reclaim at some point, but there's also the mental part that you want to reclaim that finds balance with motherhood, marriage, career, and other personal interests. Right now with #3 I can still retire in twenty years. With more that twenty may start to look like twenty five or more. I have plans for my early retirement years so I need to be able to still have a little youth left by retiring in my 50s rather than late 60s.

3. Room: You can fit three kids in any car and in any three bedroom house, which is what we have. But if the family starts getting bigger then we'd need bigger cars and a house. The process of getting those is a lot of work and those bigger accommodations connect back to #1, money.

4. Age: I'm 34 and will be 34 when this baby is born, but that means any that would come after would be after I'm 35. As most women probably know pregnancies are higher risk after that, but not only that it also means I'm even older before I move onto the next stage of life after kids are raised. Not that I'm in any hurry to get there right now, but I kind of imagine us as empty nesters and retiring in our mid 50s (well since Nate is four years older probably closer to 60 for him) when our kids should all be in their 20s and starting their own lives. Being the overanalytical person I am when doing the math that also means I want to be around to see my grandkids grow up, not just be born (assuming of course that I get to live to be an old lady into my 80s or so).


5. My previous birth and pregnancy experiences have scarred me for life: Pregnancy and birth can have it's scarring experiences. How many women in the throes of labor look at their husbands and say "You better NEVER do this to me again!!!" I haven't quite done that but this kid isn't here yet. Lucky for me my pregnancies with the girls and this one have always been without the dreadful morning sickness. I loved being pregnant with my oldest. With my second I was so over being pregnant and couldn't wait for her to be evicted. My labors, unlike my sister who I think longest labor from start to finish was less than eight hours, last way too damn long. My oldest from the middle of the night labor pains until her final arrival was 30 hours! But hey with my second that was cut in half at 16 hours and so maybe this time with my third it can make it's appearance in a standard eight hour day. But here's the thing that scarred with me each. With my oldest it wouldn't be until the news broke almost four years after her birth about a local ob/gyn admitting guilt to videotaping his patients. That ob turned out to be the one that delivered my oldest. Now I'm not even going to be obnoxious enough to discuss how they would even go about identifying which of his patients were victims of this practice, but the most disappointing thing to me was both my husband and I really liked this guy. He was a nice older gentleman and saw us through from the beginning of my labor to two hours after his shift ended to bringing my oldest into the world. Then to find this out really shatters your trust and makes you question the intentions of every male ob/gyn you see after that so unfortunately now I carry around an unfair suspicion of all male obs. With my second daughter I was borderline anemic and apparently it caused complications during labor that freaked my husband out (I was too out of it to be too concerned and by the time I knew the worry part was past)and they kept me in labor and delivery longer because of a concern of having to rush me to the OR if things took a turn. Luckily they did not and aside from not feeling normal or like myself for a day or two after all was good. Now with this third one the scarring incident isn't so much with the labor part yet but more so with the anxiety associated with being pregnant after two miscarriages. I love my children and I would go through it all again to get these three here with me, but I think after this one I'm done with the traumatizing experiences of pregnancy and labor.


However, I'm a never say never person. There's always the possibility of four, so only the future will really tell.  We have even discussed adopting or fostering at different points. As teachers you see so many kids that could really benefit from good homes and we'd love to give some kid a life and chance they have otherwise not had. God knows unfortunately there's enough unwanted, unloved kids out there that could use loving homes. But again that's something that would need so much more serious in depth consideration than what we've given it at this point.  For right now we better figure out this dividing and conquering thing now that we'll shortly be outnumbered. We're all so excited about three. This is what we always talked about and wanted. I know you worry with every pregnancy but sometimes I feel that I worry even more with this one about it being healthy and safely making it's way here to us. That's what we want more than anything. A healthy, happy baby with a safe, healthy, fast delivery. It really doesn't matter if it's a boy or girl. Boy or girl, we're going to love it as much as we love the other two no matter what. However, I have to know what it is so in five weeks we shall know!


If you need to catch the baby fever or need anymore encouragement on expanding your own little army of mini yous here's some baby pics from the past.

Baby G #1 with her headful of hair 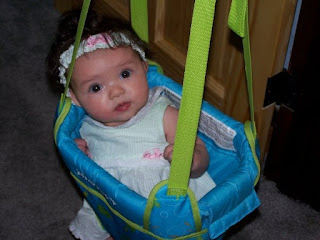 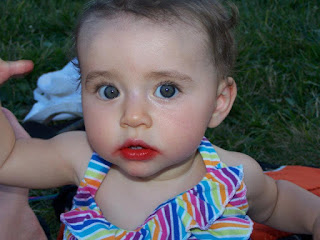 Their coloring is completely different but I feel that you can see the sibling similarity in their faces. My oldest has my husband's coloring while my youngest has mine.