Why don't these things come with instructions?

Yes, I am talking about my children. How many times as a parent have you been, "uh, what do I do about this?" And plan A, B, C, and even D just went out the window because they didn't quite cooperate the way you planned. This parenting thing didn't look so difficult when I was watching everyone else do it, and when they weren't "doing it right" I was sure "my way" in my little nonparent brain would work just fine with my future kids. Then came my future kids.

Those two little monsters I talk about all the time. When one is not playing houndini and getting into mischief the other one is wreaking havoc on something or someone. Sometimes I wish they made those little cages that they make for pets for kids too. I sure could have used one of those for my kids a couple of times. My mom wanted me to get one of those kid leashes for Averi once when I was flying with both girls by myself. No wonder I have problems right? What kind of crazy mother attempts to fly alone with two kids three and under. This crazy lady. I told her I forgot to get one and would just use the dog leash. If you have a dog and small children you know there's not much difference between them. Averi always wants to pretend to be a dog so my worst concern was that she'd think that meant she needed to walk on all fours and go around licking people, which she's done on occassion when she's playing she's a doggy. She once ate a bug by accident pretending to be a dog. But don't worry I really didn't walk my child around the airport on a dog's leash. I thought about it but I didn't do it.

And better yet to my mom's relief I didn't lose her or her sister. Even when we missed our connecting flight, had to walk FOREVER in a strange city (Chicago) to get to a bus to take us to a hotel, and sleep in the same clothes we wore all day since our luggage went on to make it to Kansas City. Do you know how much you sweat when you are hauling two small children, a stroller, and because I'm cheap and didn't want to pay for our luggage as much luggage as I could possibly carry? Why haven't we evolved enough as a species for mothers to grow like an extra pair of hands and eyes or something yet?

You think after all the trips alone with my kids to the store, I would have been mentally prepared for how exhausting traveling halfway across the country would be with two of them by myself. Is everyone convinced their three year has ADHD at some point? Or is it just me? They are like crazy ping pong balls. You put them down somewhere and dart your eyes a different way and off they go. It's like they do these crazy things and you think what are they thinking? Do they even think yet? Even when you put one in something to contain it so you can more closely watch the other, they still get into mischief. Averi is always that ping pong ball in the grocery store so Kenz is suppose to be my easy one because she's securely in the cart. But sometimes all those "good" parenting ideas go out the window. My one year old who is suppose to be the good one in this scenerio has ripped the plastic off the raw fish and is eating it! Right in the middle of the grocery store! Guess good thing it was fish and not chicken or something! But who does that? Was she just watching and waiting for Averi to distract me and attack that fish. She is my eater and I haven't seen the girl turn down much food but raw fish right out of the plastic in the grocery cart. In the middle of the store!

It's not even their actions sometimes that leaves you in horror but sometimes the things that come out of their mouths is NOT so great. We're standing in Chipolte once. In line to order and you know how you stand there on top of each other moving through that assessbly line. You can pretty much hear everyone's conversation. Well, Averi decides to tell me at that most opportune time, "Mommy, my underwear is pinching my who ha (does everyone name their childn's parts something?)!" she giggles. Oh, no, not so funny. Talk about that moment where you pretend your child is not yours!

Then there's trying to figure out their thinking process. Forget about a one year old eating raw fish out of the grocery cart, but by four I would think you've started to think things through a little bit. This is the incident of today that lead me to thinking expectant parents should be sent home with help guide. Again, I like to think I can venture out with the girls by myself and it will all be well, uneventful. We got Averi a bike for her birthday and I wanted to take her somewhere with more room to ride it so we went to this park that had a bike trail. And luckily a playground. We are finally about to the playground. The bike trail runs on top of this hill and the playground and ball fields sit at the bottom of the hill. And Averi sees this dog and in her excited way she turns her bike towards the dog (like she's never seen one!) which is at the bottom of this steep hill. Well, the bike with her on it just takes off down that hill. And she is screaming "Mommy!' like no other. Talk about that split, "oh shit this may not be good" second. So I leave the stroller at the top of the hill secure luckily and run after her. If you know me from my younger years, I'm not very fast and I'm sure age has made me slower. I stick my foot in the spike of the tires, grab the handle bars as the bike finally went from racing down the hill to a soft, gentle crash. And of course, I get "Oh, mommy, that was scary!" My response is, "What, what, what were you thinking?" You know those words that I'm sure I'm going to say over and over and still over again. "Well, I wanted to see the doggy," she says. Like really? All rational thought just evaporates their mind? Just like that. What's bad is this was not my first kid rolling down a hill incident. At a baseball game last year, Averi needed me for something and I thought I left Kenzi securely on the blanket we were sitting on, but when I turned around she had somehow toppled over and was rolling down the hill. Talk about scooping your kid up and looking around frantically like, "Did anybody just see that?" Again the thing I've found about two of them is as soon as one has you distracted the other needs you or is into something it shoudn't be.

And it'd be nice to have some kind of warning that not only do they cry and whine, but they can throw these awful, relentless fits. I'm sure Averi threw fits but they were over in like five seconds. But now there's Kenzi. And this girl is the queen fit thrower. And she doesn't realize when she gets mad that she's suppose to BREATHE! Yes, I have seen this kid pass out twice from holding her breath. She gets mad, she opens her mouth but nothing comes out, tears start streaming down her face, her lips literally start turning blue, and then her eyes roll back in her head, and down she goes. Crazy! What do you do about that?!? I've started blowing in her face like I'm in labor again or something. I'm sure today the cashier was looking at me like I'm crazy as I'm yelling at one kid to stand still and telling the other "Breathe, Kenzi" and waving my hand in her face as she's starting to change colors and then telling Kenzi, "Thank you," as she lets out a big fat wail throughout the whole store. I call my cousin often on how to deal with this one because somehow we ended up with the same kid. Hers is just two years old so she's my "expert". Lucky her. But this way if Kenz doesn't turn out right I'll just blame it on her.

Then there's the toys. And the stuffed animals. I'm sure those things procreate at night while we're sleeping. I thought the purpose of giving kids toys was because they play with them. I feel like their idea of playing with them is let's see if we can cover every square inch of this floor with some kind of toy. I use to say Hurricane Averi hit. I will walk into her room or their playroom now and just want to sit on the floor and cry, "Why? Why?" like someone's that's dealing with a real destructive tragedy. But I guess it's a good thing they have dolls and barbies to play with before we venture into playing with other kids on a daily basis. You know how you watch kids drop their baby doll on their head and think good thing she's not playing with a real baby. That's Barbie in our house. I sure hope my girls treat their friends better than Barbie.  First, Ken literally lost his head awhile ago. We kept him for a bit but he just kept losing his head.  Then there was the burnt Barbie. Yeah, she didn't make it either. And last week we had the poopy Barbie. Kenzi has pooped in the tub more than any kid I know. Course I guess I only know one other. And it was like Barbie's head was a magnet. Those nice long Barbie tresses just drew in all those poopy particles. And yes, I scrubbed poop out of Barbie's hair.


Don't listen to my mother. I'm as innocent as can be. 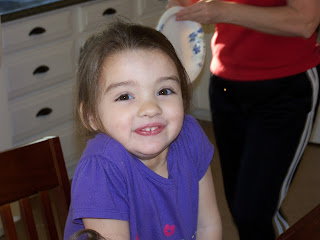 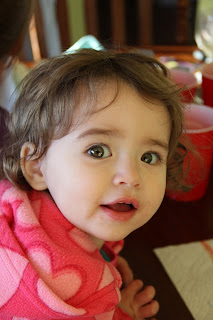 My sister did it. I swear.

So maybe I could have used some kind of forewarning that they're not quite as innocent as they look. Guess it's too late now though so I'll keep them. Life would be so boring now without all those Averi and Kenzi moments. As much as I feel like I run around that half a step ahead of crazy, they have definitely made my life laugh out loud funny and I have to say I kind of enjoy the crazy. There's never a dull moment around here.
Posted by Stepping into Motherhood at 10:05 PM