The title is a quote of my dad's. My dad raised three daughters, but was occasionally criticized for treating us too much like boys. I guess we were suppose to be these dainty, submissive beings, but instead he and my mom got three independent, head strong, out spoken girls. It was a common Saturday morning practice for the three of us to rough house around. He didn't raise us to be push overs but to stand our ground. Another favorite sayings of his was "Blood is thicker than water." I guess this is where the "throw punches, ask questions later" followed because if your sister/cousin needed you to back her you just did it. You jump in whether she's right or wrong and sort it out later. As we grew up this occurred several times. I won't to into the stories of my childhood, but use this more as a background for my own rational for my parenting to my girls the other day.

I shared this story about the girls to my friend I've known since the fourth grade the other day. While I was talking to her my husband overheard and shot me disapproving looks, but I have reasoning here. Maybe not very good reasoning, and I know it is not the "parenting practices of today" handbook.

If you don't know my girls well it's important for the point of this story to know that the oldest is a people pleaser. I call them my sugar and spice sometimes, and she is my sugar. She is a sweet, kind hearted, most of the time a very thoughtful little girl. I'm watching her the other day at the carnival. She goes to take this seat on the ride, and this other little girl comes up behind her, in the shuffle of kids rushing to take their seats, shoves Ave aside and takes her seat. Just as when the girls fight I don't step in and play the rescuer. She needs to learn to fight her own battles. I watch her let the girl take her seat and walk away to a different one. She then tried to save the seat next to her for her sister, and again another little kid just shoved her arm away and took Kenz's seat so Kenz ended up a few seats down from Ave for the ride.

Kenzi is my spice. She's a fireball with a temper, not afraid to speak her mind even if it is in gibberish, and even though she will fight back, sometimes she's the instigator. I've never seen her bully other kids, but she's kind of mean to Ave sometimes.

A few days later, Ave comes tattling to me about Kenz throwing a ball at her and being mean. I hate tattling. So I asked her, "Did you fight back? Throw the ball back at her. Tell her that's not nice. You gotta stand up for yourself sometimes, girl." She walks out of the room. Again I purposefully hung back to see how they would handle it. A few minutes later Kenzi comes in, "Sissy, threw ball at me." She was giving me her most pitiful, sad face, but I looked at her and said, "Did you throw it at her first?" When she nodded I went on to tell her, "It's not nice to throw balls or be mean to people. If you're going to do something like that you better be ready for them to fight back because nobody likes a bully. If you're mean then you deserve whatever they give back. Be nice though, you're not a mean girl."

There was something I wanted them to each learn here. Did they? I guess time will tell. I know modern day parenting is to go report the bully, don't fight back. I was not raised that way though and I can not get my head around that thinking. Even though my husband gave me dirty looks he has his own share of "throw punches, ask questions later" stories so he doesn't exactly have a lot of room for dirty looks. Throughout life we're unfortunately going to encounter different so called bullies or just mean people, and at some point we have to just know how to stand up for ourselves or people are just going to take advantage of us our whole lives. There's a line somewhere between being fiesty enough to stand up for yourself, but not to the point where you're mean to other people. For Kenz I want her to keep that spunk but not be the bully, and for Ave I don't other people to push her around. And last I want them to always have each other's back.


Luckily they don't fight very often though. This is how I found them sleeping the other day. I think Averi will stand up more for her sister than she will herself. 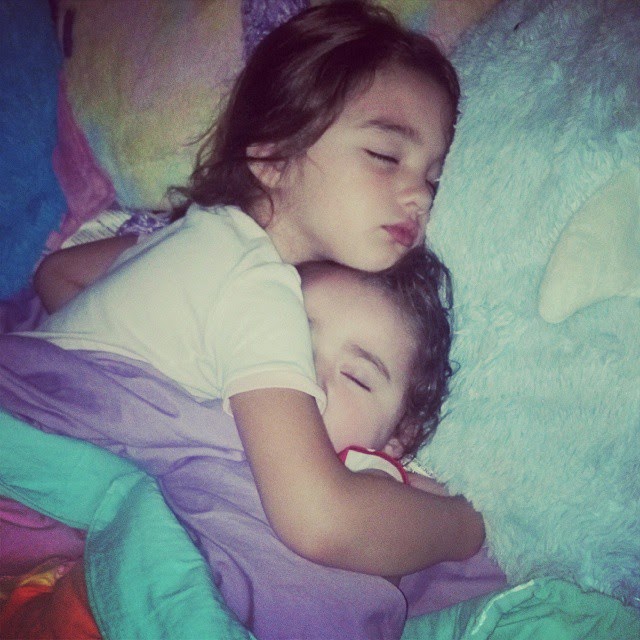 Posted by Stepping into Motherhood at 10:32 AM