My husband and I both grew up with dogs. The dogs of my childhood were Ginger, which I don't remember because my dad hit her with a car when I was three I think. Then my parents got Rambo, and he became my sisters and my childhood pet. I was three and I believe my youngest sister was just a baby when they brought him home. I'm not sure what kind of dog was Ginger was, but Rambo was a black lab. My parents also got a yellow lab named Rocky , but I think he was a real pain and kept getting out of the yard so they gave him to someone else. It was us five, Rambo, and a stray cat we named Tigger that my dad let hang around for a few years. Unfortunately, at the beginning of my senior softball season one morning while my sisters and I were getting ready for our opening scrimmage of the year, my parents had to take Rambo at age 14 to be put to sleep. They didn't tell any of us what they were going to do, which since we were fourteen, sixteen, and seventeen I think was kind of a parenting fail on their part but who knows. Maybe I'd do the same. I still think they should have told us so we could have said our formal good byes.

But either way I know Rambo will always be the childhood pet the three of us remember. My parents are now on their third lab since Rambo, two of those three are currently living, but because I was on my way out of the house by then I've always thought of them as their dogs, not mine.

Nate has mentioned more childhood dogs than I can keep track of, but the one he always talked about the most was Aspen, which I don't think was actually a childhood dog. I think he saved up money from his high school job to buy her himself so I think he had her for five years between the end of high school and beginning of college. She was black Great Dane. As some know Great Danes have short life spans, typically 6-8 years; however new studies are emerging stating that it can be increased to 10-13 years with a good diet and care. Unfortunately, Aspen was only five years old when she died from a common Great Dane ailment.

Just as Rambo was my last pet, Aspen was Nate's last pet. Then as you know came Bettis. If you know us personally you know how much Bettis has come to mean to us. Even the other day when we were talking about the pets in our lives, Nate mentioned how Bettis is probably the most meaningful dog he's ever had. We've had this dog since our first year of dating; he will be 10 in November. He has gone on countless trips with us, and our family started as the three of us. However, his health for a little over the last year has not been great. In fact, today I ran into a lady with a 10 year old Weimaraner, and the comparison between him to Bettis saddened me because it reinforced how bad of shape Bettis really is in. We know we're at the end of our time with Bettis. Averi may remember him, but in the end it will be our hearts, mine and Nate's, that Bettis will hold a special place.

Ever since we've moved and have had the room we've discussed whether we would look for another dog while Bettis was still with us or wait. Nate has talked about wanting another Great Dane ever since I've known him. There was never any plan that this Fall would be when we'd get a new dog or that it would officially be a Great Dane. It just so happened that Nate found them for sale in town and at a price that we could afford. So this weekend we brought home an eight week blue female Great Dane that we decided to name Andromeda and call Andi.

The girls never got to experience Bettis with much energy or youth so I've always known I wanted a dog they could grow up with, and I hope Andi is that dog. Five years is  just a small chunk of a childhood so I'm hoping we can figure out how to push for that 13 year mark so she'll see my girls into high school so if you have any large dog breed diet recommendations throw them my way.

Just like the cat, Dazey, Andi has taken quite a liking to Averi. She's my animal whisperer. For her kindergarten About Me book she stated she wanted to be an animal doctor/vet. She takes good care of them and they respond very well to her. Between her love and care for our household pets and her enthusiasm for always wanting to help the neighbor care for her horses maybe one day we'll have a vet in the family.

Future vet or not though, I can't imagine childhood without a dog. Okay I can't imagine life without a dog. My sisters and parents as I said all still have family dogs. In fact two of the three of them have two dogs. They are a part of our families. And now to introduce you to the latest Glenn family addition: Andromeda Storm aka Andi 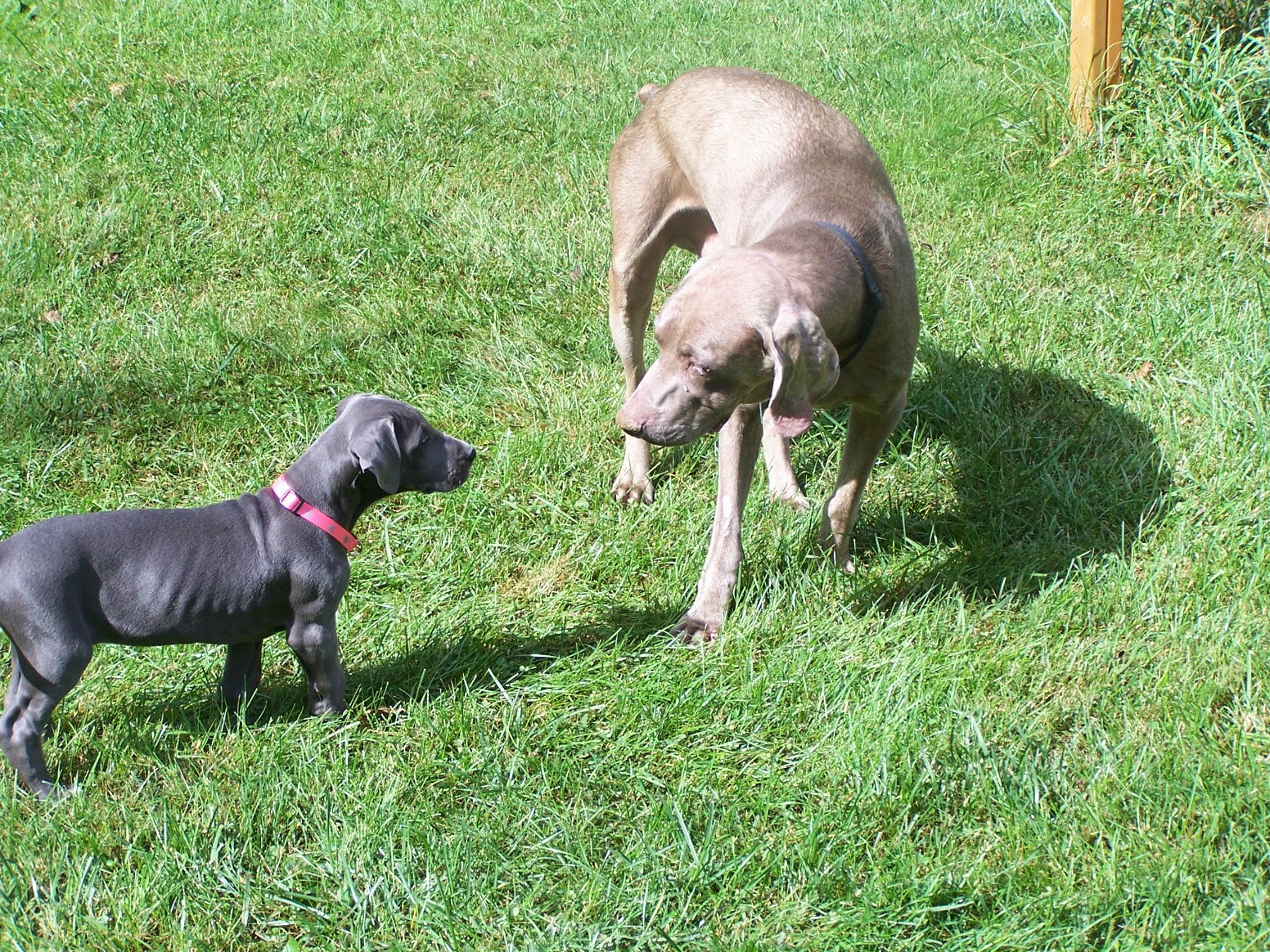 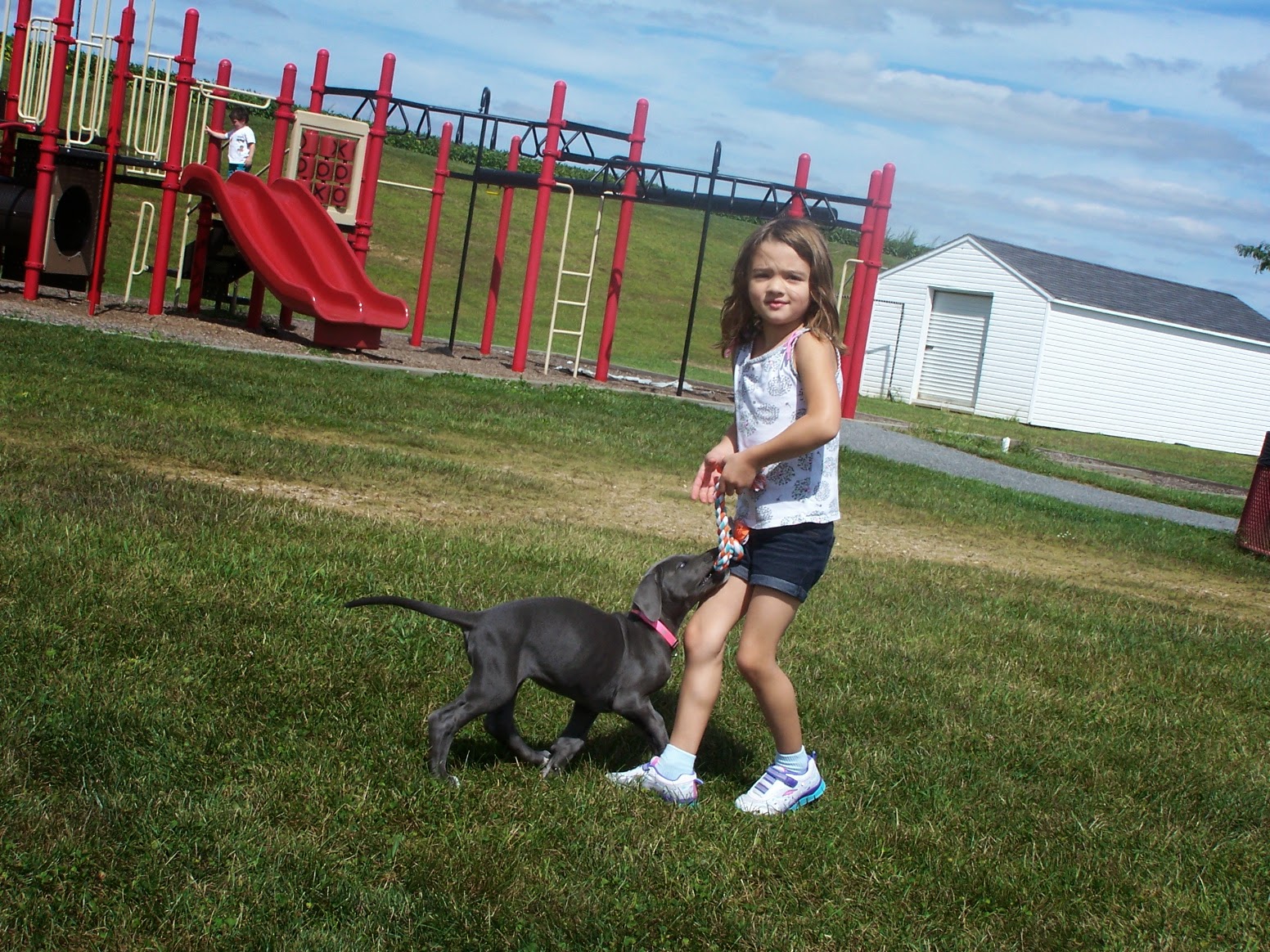 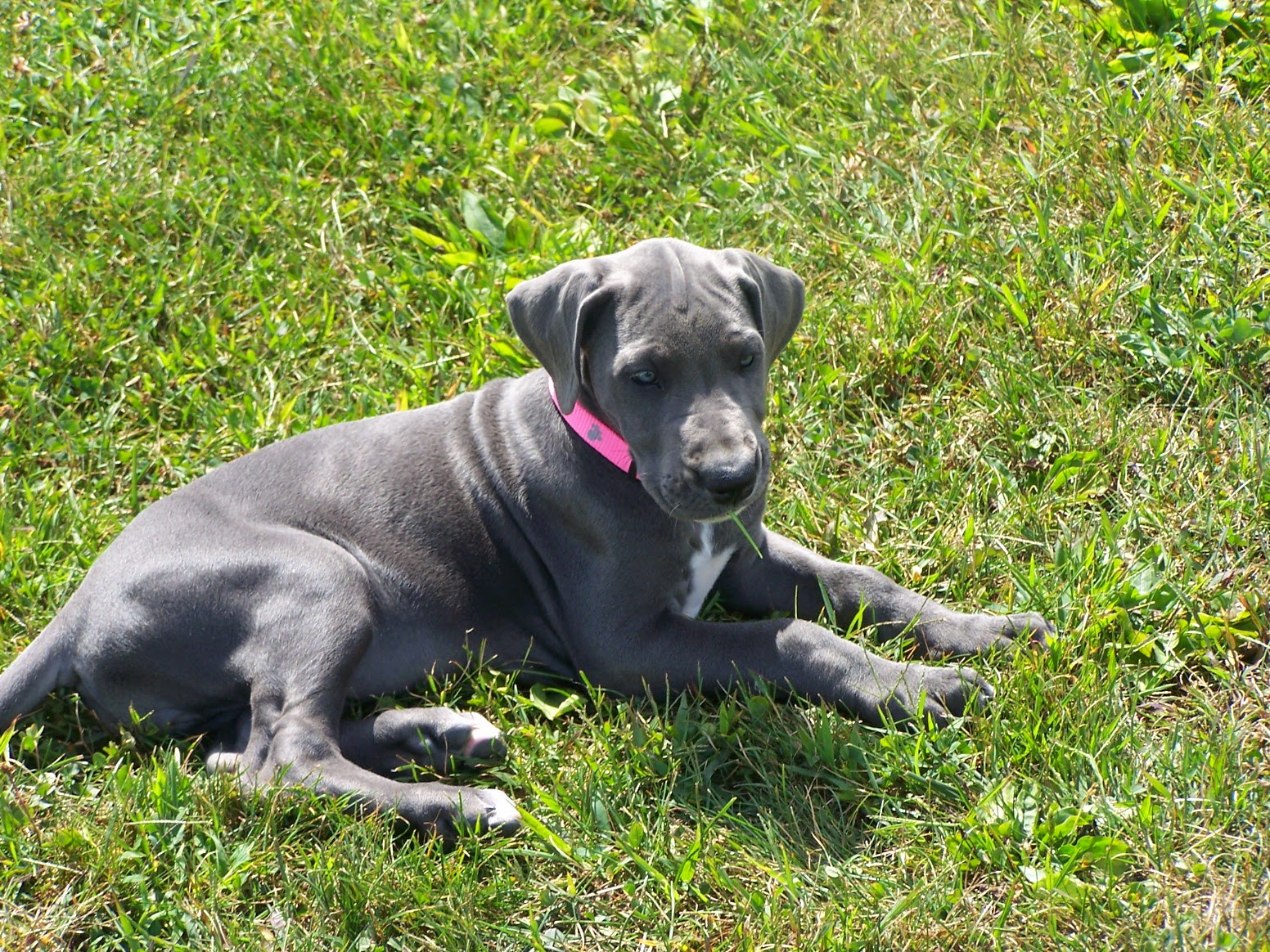 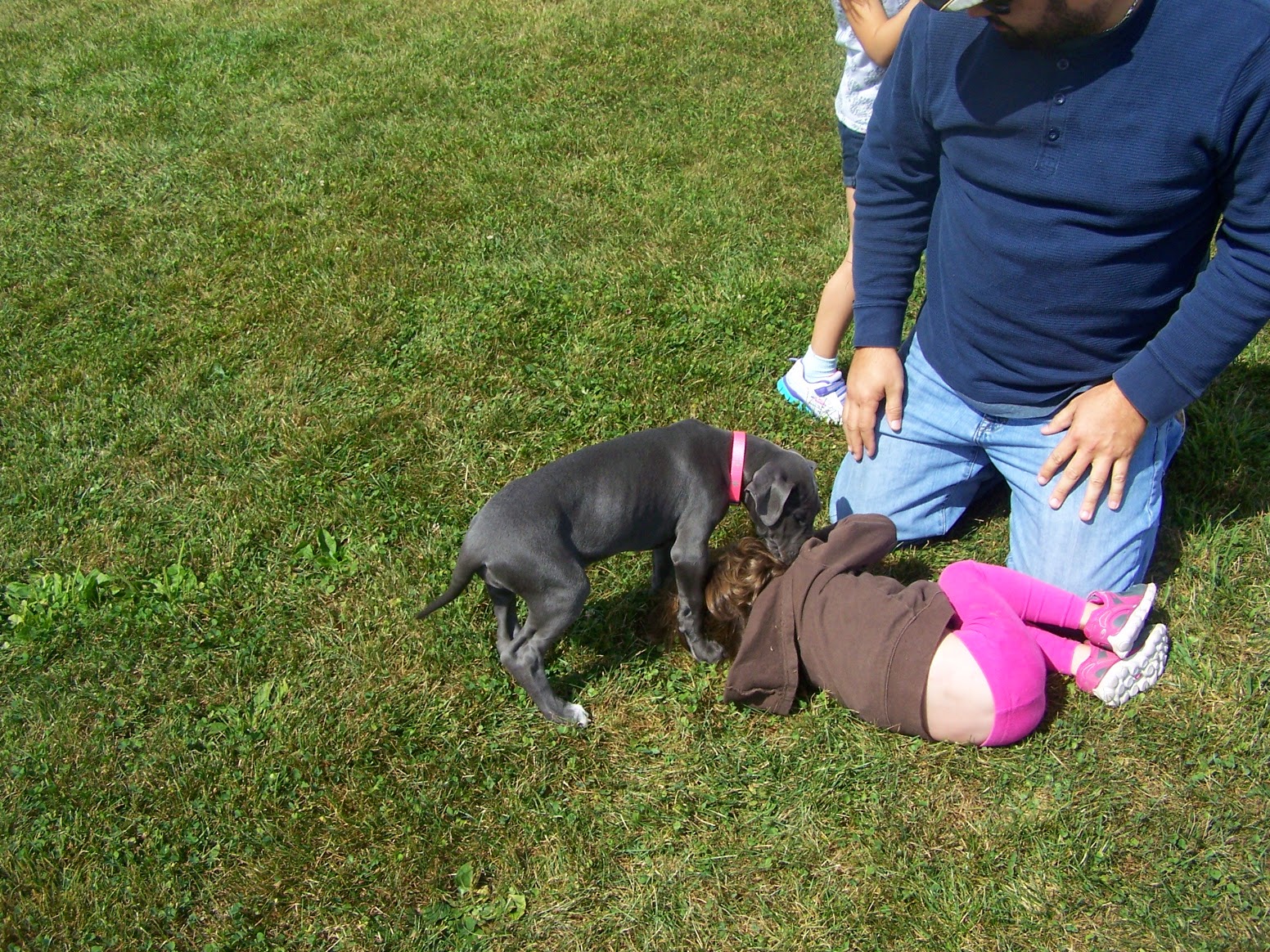 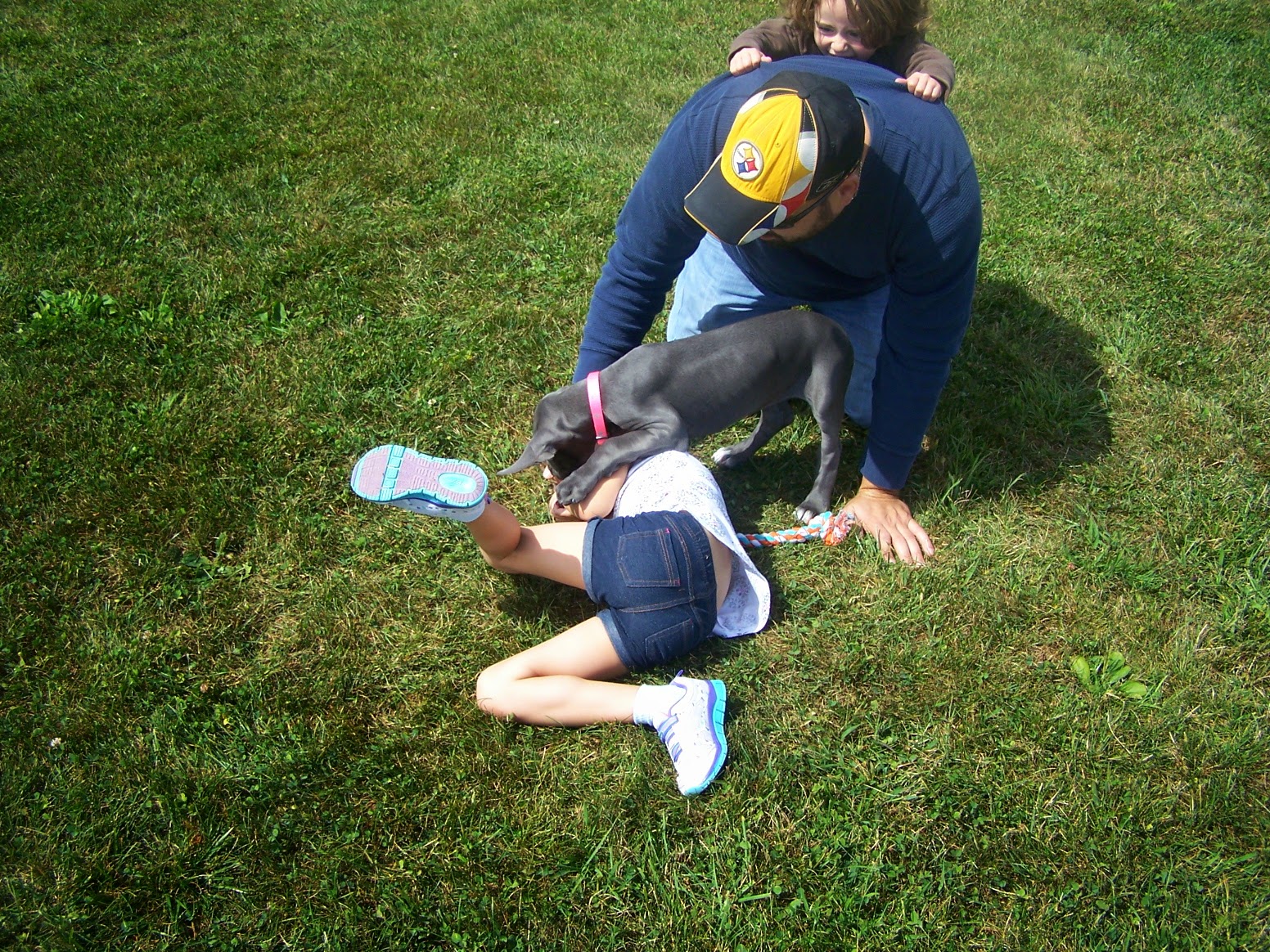 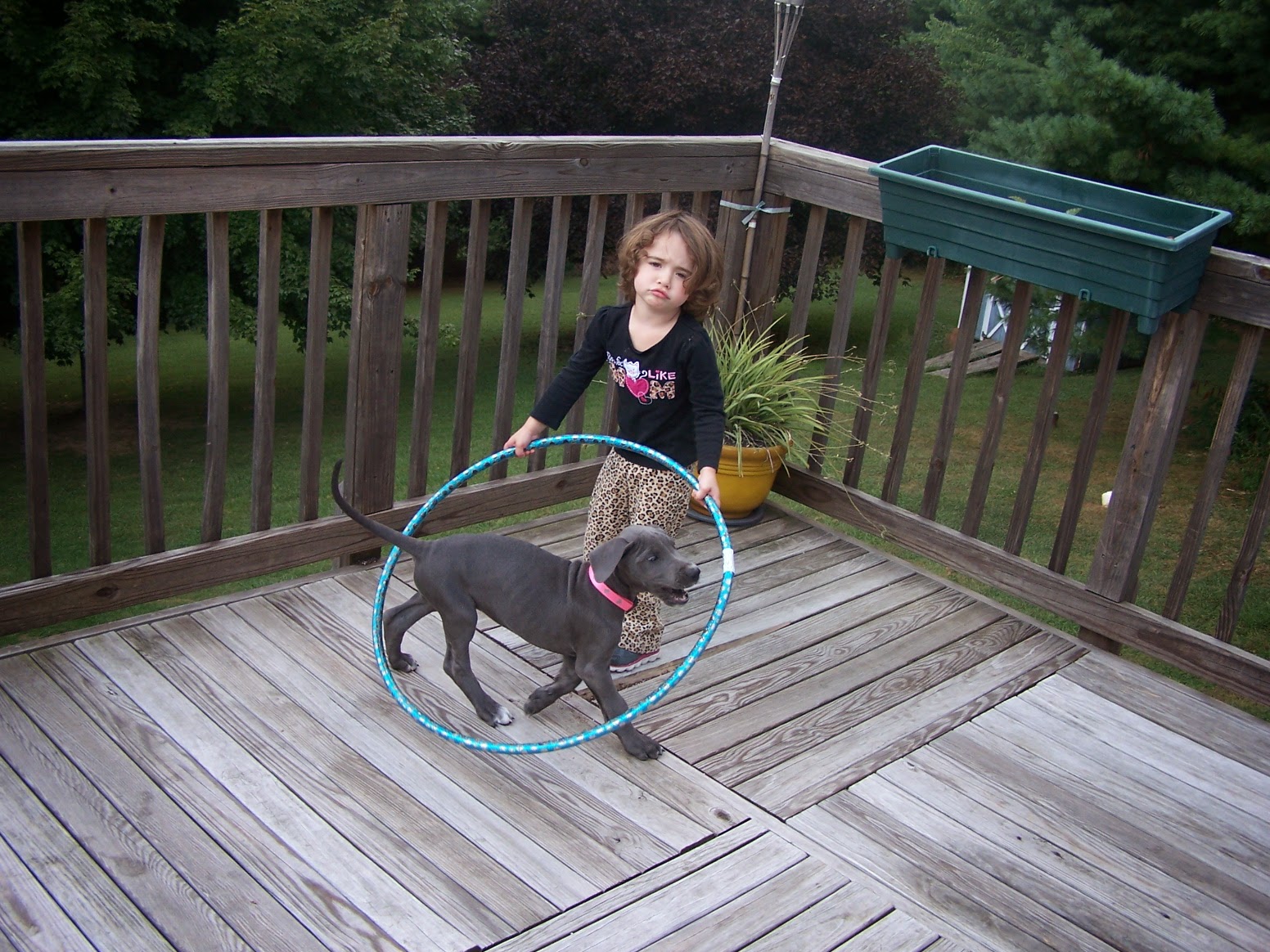 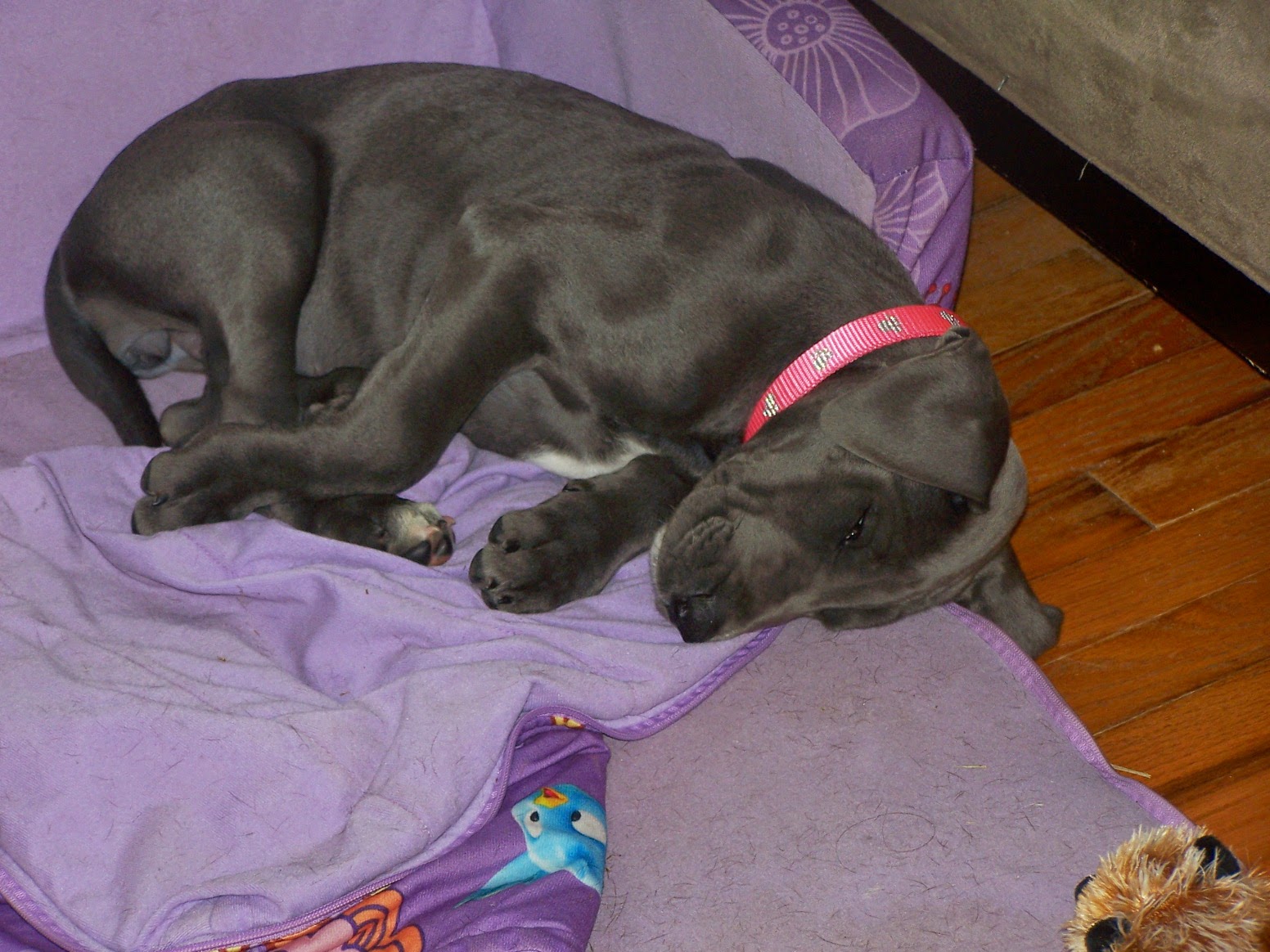 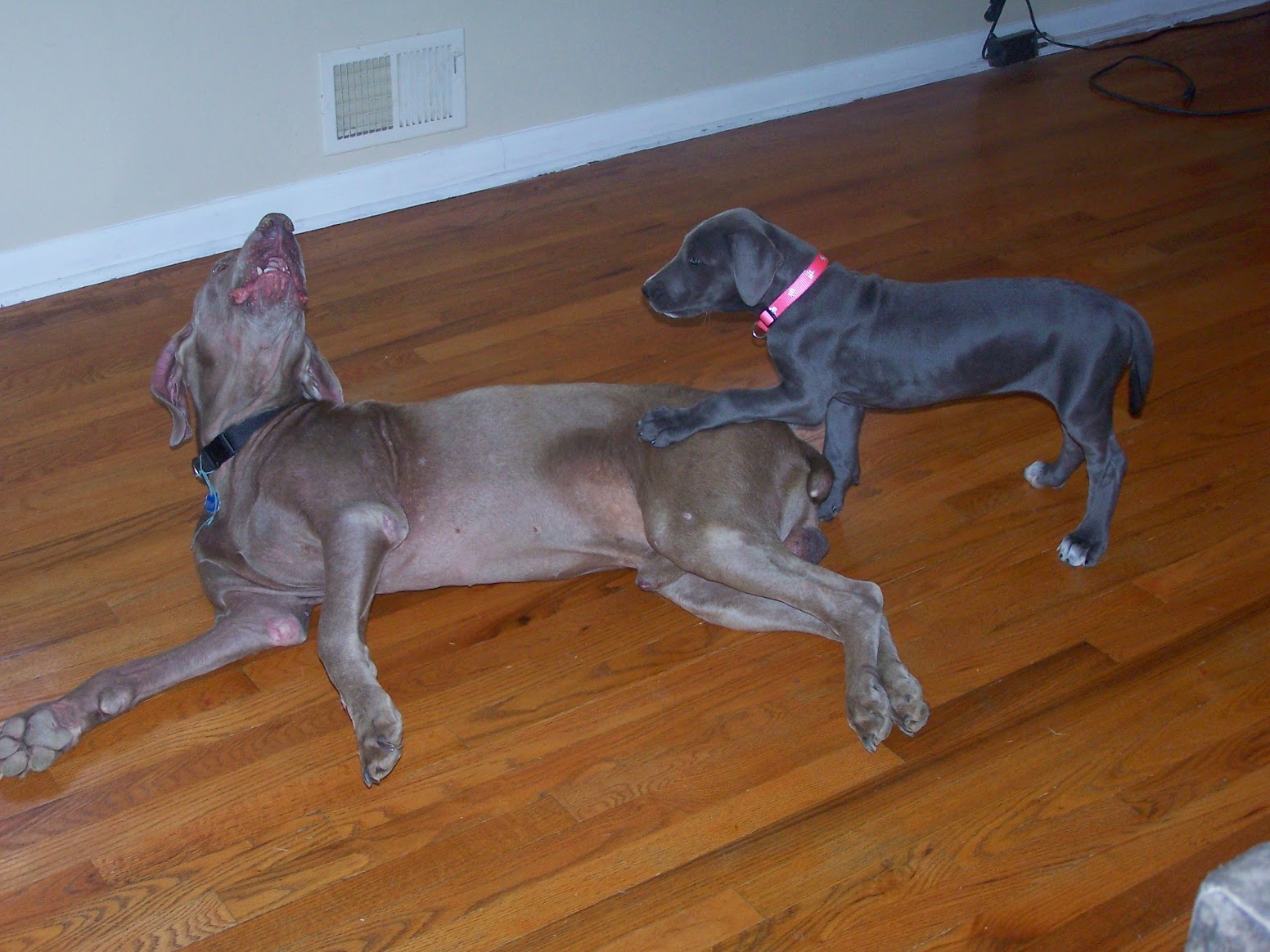 Sales from my book, Moms, Monsters, Media & Margaritas,  this month is going to the Families of SMA this month.   The book examines how our 21st century digital world shapes our perceptions and expectations of our capabilities as mothers, wives, employers, and women. I talk about balance or the struggle of finding balance often in here. It will leave you with a humorous and inspirational look at the individual journey of motherhood that takes each of us from the girl we were to the woman we become. The book is also now available on the Amazon kindle for $3.99 and the Barnes and Noble Nook for $4.99. With the purchase of print and ebook books  20% of sales goes towards a children's charity for the The PACI Fund Project. This Fall donations are going to the Families of SMA charity.