The Mommy Meltdown Moment (in the Wal Mart) 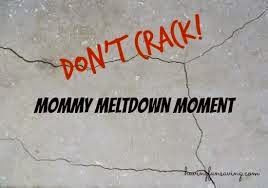 We all like to wear our Superwoman cape proudly. Some days we can even feel like we master the role well. For a moment we think we have the kids, career, marriage, house, and everything else all well balanced. I've had those moments and how I do love those moments where I feel like I can do it all.

But then there's a small crack in that perfectly balanced tower of motherhood balance. For a bit you still manage to keep it all together. It's a shaky balance for a bit but you think you got it. Then it's just a little too much pressure on that already swaying tower of balance, and it all comes crumbling down. Then there you are. The woman who likes to think she has it all together with her tower of balance in chaotic clutter around her while she finally just gives in the tears that have been threatening as she struggled so hard to keep that balance.

And there I was in the middle of Wal Mart, unable to stop the tears anymore. I handed our groceries and children over to my husband and walked out the door to have the mommy meltdown I'd been holding in check.

It all started when once again there was another accident on the highway on the way to work. When I should have been there at 7:00, a good half hour before school started, I then had to take a detour to barely make it to the parking lot ten minutes before school started. Once there I had to waste probably close to another five finding parking because they blocked off the teacher lot for some activity. Then of course with it being the last week of the quarter not only am I freaking out and stressing about all the papers I still need to grade to close the quarter, but I have parents and students bugging me to make up work at the last minute. Then you always have the one kid that can just ruin your day as it is. After work I had to go to our old house to show it to potential renters. That went fairly well, but it was an hour and half out of my already crazy schedule because after I picked the girls up we had to make a way overdue trip to the grocery store, Wal Mart. We were suppose to meet my husband there because the grocery money was in his account, but he had called to say he'd be late because he had meetings after school.  After shopping and ringing up our $300 worth of groceries my debit card was declined. I had just deposited three checks in there Saturday and had no idea how or why it was being declined.  I had just taken my credit card back out of my purse because I always figure if it's not in there I won't use it. So there I was twelve hours after I left home that morning with a cart full of groceries, two tired and hungry kids, and apparently no money. I had to go over to customer service. From there I realized the money I deposited Saturday wasn't available yet. It wouldn't be available until after midnight. My phone was dead so I had to call Nate from their phone. He was still a half hour away with access to the account that did have available money. So I had to sit there with the girls and wait. They of course wanted to crawl all over the place. Then they started whining they were hungry and wanted to get into the snacks in the grocery cart. At this point I was exhausted, frustrated, hungry. I asked the guy behind the counter what time it was and when he told me 7:00 that was it, I was done. I just started crying.

We still had to eat dinner, I had grading and a vocabulary quiz I should work on tonight, groceries to put away, and I just wanted to chance to sit down before I had to turn around and get up before 6:00 the next morning and do it all over again until 8:00 tomorrow night. At this point Nate finally showed up. Luckily, he's an understanding guy. He told me he'd take the girls and to just go ahead and go. I did. I needed to get myself together but instead found myself in the Wal Mart parking lot, unsure where I parked my car. So there I was wondering around, trying to find my car.

Luckily it didn't take long. We decided we'd just grab something quick for dinner. When I stopped to get gas and grab myself something I then discovered I left the card that was declined that would have money again tomorrow at Wal Mart. However, when I got home I discovered the Walmart guy gave it to Nate thankfully. It was a rushed stressful evening of unloading groceries and getting everything ready to do it all over again tomorrow. Only to be reminded at the end of the night every time we turn on the bathroom sink it runs straight down to the basement floor and that the guy I showed the house to that seemed interested called to say they were passing on the house after all.

Some days there are just not enough hours in the day to be the woman that does it all. Some times there's a point where too much is too much. Hopefully this peak of stress with so many things on our plate will be past us in a week or two, but it was a reminder of the reality that I can only do so much. When we stretch ourselves too thin we're not really any good to anyone, yet some of us, including myself, continue to do it time and time again, sometimes because it's just what we have to do. Other times our ambitions get the best of us and we push our limits.

Either way I'm sure this won't be the last time the tower of balance will crumble  and I'll be made aware once I again that I have limits. In the meantime, tomorrow is a new day.
Posted by Stepping into Motherhood at 10:23 PM