Mood swings and the Internet Debate on Medical Marijuana 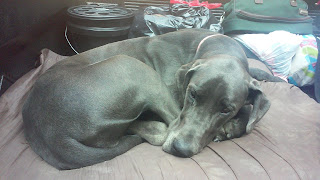 I ve still found myself lately in this rut/funk lately. I had even reached a point where I almost considered postponing the trip, which I have never in ten years of traveling around to visit family ever contemplated.  I almost always hit a low after returning home from seeing my family but on top of it I had to return home to a house absent our dog. As much as I was ready and knew it was time to tell our Bettis boy good bye, I did not want to have to put him to sleep. I prayed for him to go on his own; I would sit down beside him on his rough days these last few months and tell him it was okay to let go and leave us. As Nate said when we were driving out, it was a rather haunting experience. So many people kept telling us it was the thing to do, and even as great as Falls Road Animal Hospital was, I don't know if I could do it again. We were sad to let him go, but when my six year old started crying in the backseat, "I bet Bettis was sad to let us go too," it just drove home my anxiety of whether we were doing the right thing for him.

On top of that a couple things came up recently that were stark reminders that this isn't the first summer with either the arrival of our third child right before summer or anticipated arrival at the end of the summer. Most of the time I've been okay with the reality of what is, and we're still hoping for the third eventually.

So today is the first day back to routine, which includes getting back to my go to coping outlets- exercising and writing. However, on a sarcastic note, as some know  I am not a big medicine/drug fan as much as I've been told it would help with my low moods. But it was shared with me recently that with this new movement with medical marijuana and legalized cannabis that it would be a great "natural" medicine for some of my depression issues. I even read a book from another that promoted teaching our children to see marijuana as a "natural" medicine we should not be afraid of.

WTF, right? This whole medical marijuana push is starting to annoy me. First, realize that anybody and everybody, including myself right now, can post any crap they want on the internet.  Everything you read on the internet is not truth. Second, there are some valid arguments for legalizing cannabis for medical purposes. I believe it does have medical purposes for some serious situations like cancer; however, I understand it may not be chemically enhanced (again I haven't done my official research here including smoking it) but natural or not I don't really see how being stoned out of my mind all day or half the day is a constructive, "natural" way to deal with some disorders like anxiety and depression. I don't care if the damn peacock (the moral of the stupid story I read) got to spread it's beautiful feathers after using the natural remedy of cannabis to treat its depression. Being high all day everyday  is not a "natural" way to be productive in your day to day life; that's called looking for an escape instead of facing your life to me.

That damn book's argument for supporting the legalization of marijuana because it's a "natural" remedy to a variety of disorders and health issues just really rubbed me the wrong way. Natural remedies is this, some creative outlet.  Or how about healthy eating? Or exercise? Or my favorite exercise outside in the fresh air. You want natural? Go make your muscles burn while breathing in the natural fresh air of cow and horse manure. If we're going to believe any piece of shit that people shovel at us, we might as well go breathe in the good stuff. How much more natural can you get than horse shit?

Disclaimer: I can blow smoke out my ass just like about everything else you read on the internet so do not blindly accept my claims as truth. My research on this topic is pretty much nonexistent. I would be willing to support the arguments for this more if we could cut back the idea that it's the "natural" cure to humanity and every ailment we face.

Posted by Stepping into Motherhood at 11:00 PM