The third and final Girl or the first and only Boy?

The third and final girl or the first and only boy? It is the question of the Glenn household right now. We could know right now but because I only had to hold off a week, and not the rest of my pregnancy like he wanted last time, and technically we'll still be finding out almost two weeks earlier than we would have, I agreed to my husband's idea to have the gender concealed in an envelop and dropped off at the town baker.

Last Wednesday night we went and had a 3D ultrasound, something we never even considered with the other two, because we really wanted to share the news of the gender with family over Thanksgiving. The place we went to, My Little Bo Peep , also had a Wednesday evening special, so we lucked out and were able to squeeze in an 830 appointment. The girls won't go with us to the anatomy scan in December so we also figured this was a good chance for them to see their little brother or sister.

We closed our eyes and looked away, when she went to check for the gender, in which she was successful in seeing. We got a ton of pictures of course, and the tech sealed the gender picture up in an envelop. The next morning my husband dropped it off at the baker. They are to dye the inside of the cake pink or blue so when we cut into the cake with family on Thanksgiving night we will all find out together whether this last baby is the third girl or first boy.

We'll pick the cake up Wed evening on our way out of town. In which case we have all ran through the ridiculous Glenn moments that could occur with trying to travel 6-8 hours with this cake. We've imagined dropping it and the gender being revealed all over the pavement, someone accidently planting their foot in the middle of it in which the gender would be revealed all over the bottom of their foot, we can totally seeing our Great Dane finding it and eating it when we stop for dinner on the way up. In which case the gender is revealed in the smeared cake all over her face or in which there is not a lick of evidence left to reveal the gender. With us it's kind of comical to imagine all the ways it could go wrong but let's just hope the cake makes it up there in one piece without revealing the gender until we're all ready to learn it together Thanksgiving night.

Many have also asked how are we going to tell everyone else? Originally the plan was just to send a text message to those we're closest to and then share an announcement on facebook. But friends suggested trying to video tape it, send the text to let them know we're getting ready to post the reveal online, and post a video of the actual cake cutting rather than just pictures. So I think that's what we'll try for so if  you're not on the Glenn baby #3 text message alert, and you are one of the ones anxiously waiting to know what this baby is the baby reveal video (or picture announcement if the video fails) will be posted around 7 Thanksgiving night. 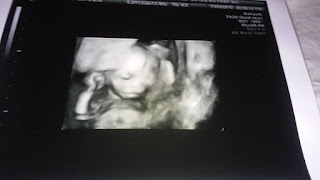 Also a few people have started asking me to share my baby need list. My sister is hosting what I'm calling a diaper/hand me down baby shower since it's baby #3 back home over winter break.  Whether it's a boy or girl though there are more things than I would have imagined that I need so below is the list for those that have been wanting our list