It's All In What You Choose to See 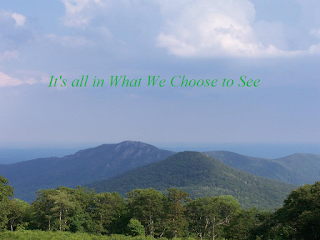 I'm going to back track here to all the way back to last January's miscarriage because now almost a year later a series of events that took place are starting to make sense in their meaning. Shortly after I had the miscarriage in January I had what I call a visitation dream from my grandfather. The dream left me incredibly unsettled and as I explained in the post it was because the message he brought to me wasn't what I wanted to hear. Unfortunately, all I remembered when I woke was my feelings of unsettlement and anxiety but not exactly what the message was. I told my sisters I took it to mean that maybe we weren't meant to have any more children, and that's why the dream upset me. I thought about and overanalyzed this dream for days. To this day I still ask for him to come back and repeat the message because I hate the lack of clarity, but I'm starting to see it would become to clear me in its own time.

Oddly enough just as I shared the dream from my grandfather on the third of the month, after asking repeatedly for another message from God  I got it on the eleventh of the month. This time it came to me in the picture of a stork carrying a baby with the message "let your faith be bigger than your fears"  on a feed on the internet. As I mentioned in the post after I saw this the first time and Nate saw it too, I scrolled the internet for forever to find it again. To this day I still cannot find that image with that message on the internet. This gave me great comfort that in time we would have our third baby, and even though I still felt uncertain about the dream with my grandfather I let it rest for awhile.

As we moved through the summer and the months I anticipated becoming pregnant again, I was again overcome with this sense of anxiety and uncertainty.  I felt that it had something to do with being scared I'd miscarry again or scared of the change with adding a third child being the rough transition adding the second had been. At one point I mentioned to someone how part of the anxiety of the third was the emotional rollercoaster I'd have to put myself through, which I attributed to having two miscarriages.

However, as my thyroid tests came back great and the pregnancy progressed past the first trimester rather than feeling my anxiety ease it strangely became overwhelming to the point where I couldn't sleep. I also had a dream in which I dreamed he was boy but something was wrong with either the pregnancy or delivery but in the end it was all okay.

Now today now that I have some more definite answers, though not the ones I was hoping for, all these events give me hope. I think the message my grandfather brought me was to warn me this pregnancy would emotionally and mentally test me possibly even more than the miscarriage that broke my heart. I think he came to mentally prepare me. I think the my nagging anxiety prior to getting pregnant and in the recent weeks from the end of the first trimester up to last week was because I knew in the back of my mind what I'd been worrying about for almost a year was coming. I think the stork message about "letting my faith be bigger than my fears" and the dream with my little boy was the reassure that whatever was coming we would get through with it with him and be fine in the end. Oddly enough since I found out about the concern with the baby's heart last week I've actually slept better. The weird anxiety and panic attacks have disappeared. Even though I hoped for an all clear today I did not anticipate getting it. In fact we pretty much got the exact answer I told Nate beforehand that I thought we would get.

They're still concerned about his heart; however, it is not the lifelong congenital heart defect with no cure I was worried about. They can't even completely confirm anything really yet but what they currently see is a benign mass beside his right ventricular wall. She suspects if it's not just fatty tissue it's possibly what's called cardiac fibroma. Right now it is not causing any problems and his heart is functioning completely normal. The concern is if it grows it can cause obstruction with the blood and oxygen flow and other problems. I will do at least one more echocardiogram while pregnant and he will have one after he's born to confirm or rule out this concern. My biggest question that I want to ask is if it is cardiac fibroma what are the treatment options. I get the sense if it's not growing or causing problems they just leave it be, but what I don't like is it can grow rapidly and spontaneously. If they have a concern there is heart surgery, but honestly as scary as heart surgery sounds once he has it removed there's no further worry of something happening later. Even though they are not even 100% sure this is what the concern is, I plan on asking questions and looking into options now because I am a take action person, and if this is what we're facing in a few months I want a plan of action ready for him. We're working with one of the best hospitals in the country with Johns Hopkins. He'll get the care he needs if he needs it.

So it's all still a little scary or a lot scary depending on how you look at it. But I truly believe all these things/signs that occurred in the last year were put in place to reassure me at this exact moment. It's going to be a long four more months, but I truly believe in the end he will be fine. Getting him here is not going to be an easy road emotionally or mentally for me or my husband, and it may be a little rough and bumpy when he first gets here. But we will all be okay. I have faith because that's what I choose to see in everything that lead up to this point.
Posted by Stepping into Motherhood at 8:41 PM