I've made it known at times that I have my issues with religion. But to me there's a big difference between faith and religion, and even though I struggle with where religion fits in my life, I definitely have always had room in my life for faith in God. I believe in a higher power, one that I refer to as God as several religions do, and I do believe in heaven or some kind of after eternal life. I think of myself as a spiritual person but not a religious one.

The main reason I would say I'm skeptical of religion is because it's a man made institution that at times has been used to instill fear into people to get them to behave or belief a certain way. It's a tool used to manipulate throughout history by man. The Bible was translated by man. Who is to say how accurate that translation is to God's word. Everyone uses that translation to manipulate it to the benefits of their own philosophy.

However, if I lean towards anything it's Christianity. Here's the thing I don't like about it though. I don't like the preaching that we must Jesus as the savior or we're damned to hell or how it doesn't matter if you live a good, caring, giving life if you don't accept the Christian beliefs you will be damned to hell. I DO NOT like that thinking. There are good people out there that are not working for the devil (a non Christian is not the devil) that are raised to believe in their cultural and/or religious values that we were born into.

That being said though, I still encourage my girls to attend Christian Vacation Bible Schools because I want them to form their own conclusions and beliefs. We do pray to God together at night sometimes, and they've attended church with us at times throughout their childhood. They know I believe in God. I do not impose my cynical views of religion on them. I hope they have faith so will share my faith with them but I want them to find their own way when it comes to what they think about religion.

That also being said,  I have visited the Jesus statue in Hopkins hospital before the birth of both our girls, and I am adamant that we must visit it again this time. So adamant that I told Nate if I can't make it there because of labor he needs to go without me.

I believe Jesus lived and I believe he was a great man. Is he the savior? I don't know. Is he the son of God? Anymore than the rest of us are God's children? I don't know. However, I will share a story that occurred encouraging me to maybe belief there's more truth to the Bible's message about Jesus than I've been willing to give it credit. Just as I feel I've "seen/experienced" whatever word you want to use to confirm my faith in God and heaven, this is the closest encounter I've had with convincing me the truth of Jesus is real.

About a year after my grandfather passed away I was having a religious conversation with my grandmother. My grandparents have been devout Catholics their whole lives. But I was sharing my doubts about religion, the Bible, and Jesus as being the Savior. It was around a month later when staying at Nate's grandma's house I went to get my youngest daughter out of her crib in the back room. Laying in her crib was this page from the Bible. Underlined on those pages was points refuting the arguments I had given to my grandmother about the truth of who Jesus really was/is. In my faithful, possibly too imaginative to some's mind, I saw this as my grandfather dropping that page (I could not find any of Nate's grandma's Bibles anywhere near the crib to explain where the page may fell from) in her crib to prove to me who Jesus really is. Not only did he have to have the last word in typical Grandpa fashion, but he knew if he could tell me somehow the truth of who Jesus is I would believe him because I have faith in God's existence and the other side, more than I would ever believe someone else's word or some word written/translated by mankind.

That all being said, I think of myself as having faith.in God and his role in our lives. I don't know if I'll ever find comfort in the Bible because of what mankind has done to it to push hate or condemn others. It has been misused throughout history and still is today. Faith and God to me is all about love, acceptance, and forgiveness. I have often wondered about the question when it comes to spirituality and religion if you can have one without the other. I completely believe so; however, I know some may not see it that way. But I have hope for myself and Jesus. I am open to proof that Jesus is who the Christians claim he is. I believe my faith will lead me to the right answers. 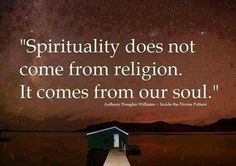 Posted by Stepping into Motherhood at 12:47 PM