This is it. The end of my longest summer vacation to date. It came at a year where I desperately needed it. I have very mixed feeling about going back. Normally I'm excited and ready. But this year I feel more nervous about going back than I have in years, but there is a tinge of excitement there beneath the surface so hopefully as I have six days plus two weekends to dig back into things before students arrive the day after Labor Day that excitement will take over the nervousness.

Like always it's going to be CRAZY around here this Fall, but I always tend to have a secret love for the chaos of too much going on.  The funds thankfully came through for the school to give my husband back his position in leadership in his school again this year so that means long days and some late nights again for him but this is a blessing so we'll take it. My oldest is in travel soccer which is three days a week including games with some all weekend tournaments. My middle starts kindergarten so there will now be two to battle when it comes to the homework to do list- particularly the making them read part. She also has soccer two days a week. They're both in girls scouts this coming year so that's two extra nights every other week. The baby doesn't get his own life yet; he just gets dragged to girls scouts meetings, field trips, soccer practices and games. I have a book I'm waiting on an editor to return so I can hopefully polish it to release this Fall in time for the holidays and with what's looking like five possible book sale opportunities scheduled between the end of Sept through Dec. Luckily I'm returning to the same position for the fourth year in a row with only one new prep that's just a semester long elective course. Though it's probably my sixth year or so doing American Lit I am pretty excited about all the curriculum mapping I've done since the end of last year. On top of that the holiday seasons are approaching and though we're mostly home the whole month of Sept we have three bigger trips planned from the middle of October with New Orleans to celebrate my husband's 40th birthday to Nov with Thanksgiving with my husband's family, and finally home to MO for Christmas with mine. It's going to be busy, but there are a lot of things I'm looking forward to about this coming season as much as I am also sad to see summer go.

Three school years ago was the year I had two miscarriages in one school year, two years ago is when we went through the nerve wracking pregnancy that brought us our baby boy, and yet as stressful and disappointing as those two years were they didn't get anywhere close to mentally beating me down the way last school year did. Though it was a stressful work year across the school system, my family experienced the death of a great man, one of the most important people to me faced a cancer diagnosis (but with the end of this summer she kicked cancer's butt into remission physically and mentally), and we were in the dark about my husband's job position for this upcoming year my post partum depression stole my ability to cope with anything I think. Whereas even with miscarriages and Linc's pregnancy I was able to handle my anxiety and stresses, the PPD last year took all that from me, particularly Sept and October, though I'm just now in the past few months starting to feel like myself again. I could not handle anything, and because I feel like I failed so miserably at everything it's made me a little gun shy so to speak about stepping back into the hectic life that though a little crazy I've loved and thrived on in the past. The last time I had a similar year of struggle- my first full year back to work after my second when we suspect I had PPD then too- I wanted to go back to my school I was at then for one more year to end on a good note and I did. The year that followed that one four school years ago left me in a positive place to continue my time in education. Though I have started to search out other career options, though I hated to mention the PPD last year because again it felt like some kind of failure on my part, I am really hoping it was the biggest part of what took me down so much last year. The thing is I won't know until I go back this year, but I know I have to and want to go back to have a more definite answer for myself and where I go from here. Have I reached the end of my journey in education where I'm done with the stress and constant criticism and attacks that seem to come as part of the job or did I just lose my ability to cope and deal with all of that last year and now I'll be able to go back, brush it off, and do my thing without really giving two hoots about everyone else's criticism of how to do things that changes the next month anyhow? This year is big on helping me see whether to pursue getting out of education or keep on trucking and getting as close to that 30 year mark as I can get. Honestly it's really about seeing if I can make it through the next 6-7 because after I cross into being in for over 20 that may be the point of no return.

I think I also went back last year with some pretty unrealistic expectations of myself too. As much as I can sit here and write about superwoman being a myth and to love ourselves and who we are in the roles we play I'm the one that probably needs to hear it the most sometimes.  I want to do it all, be it all way too much. So I'm reminding myself right here. I can't do it all and though I feel at times there's a large gap of misunderstanding between others' expectations verse the realities of what I'm capable of ; maybe I'm the one most guilty of that misunderstanding. Either way I am only one person- though I may be teacher, mom, wife, and the multiple other small roles I take on-  whatever I have to give is enough. Others and myself will learn to accept that of me this year in this world of unrealistic expectations we sometimes find ourselves in. I'll do my best, I'll ask for help rather than trying to convey it through a mini temper tantrum like I've been known to do when people aren't getting the hint and I'm too prideful to just ask for the damn help, and most importantly I'm going to remember to love myself this year. I'm not going to be perfect; I'm not going to succeed at everything. But that's all okay. I'm going to be me in my own way on my own terms, and I think we'll all be just fine ;) 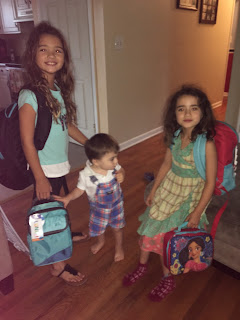 Posted by Stepping into Motherhood at 6:51 PM