The End of This Season of Motherhood

I've come to this sad but exciting realization recently that I am at the end of what feels like my first season of motherhood.

After our third baby was born - like literally shortly after while I was still in the hospital- I brought up the possibility of having a fourth baby. Must have been a damn good epidural, right?!?!? (For the whole last hour of labor I got it! )We said we'd make our final decision the summer he was a year old. Except I think we both agreed about a month into baby #3 we were good with three! Even with my sister getting pregnant with her fourth and me selling or getting rid of all my baby stuff these past few months I haven't felt that baby need twinge.

I've always seen #3 as our baby so I soak up those baby snuggles and baby things because we're good with three. But it's not just the end of having babies I'm starting to see that's coming to an end in my motherhood journey. It's not just him gaining his independence as he's leaving infancy behind and embarking on toddlerhood.

The girls grew up this summer too. Before where they wouldn't leave us for a night now as soon as we arrive into town to visit family they're leaving us to go spend nights with their cousins, aunts, and grandmas- anywhere but where we're staying it seems like. My oldest has started staying at friends' houses. She's also started staying home for very short stretches of time by herself. My middle starts kindergarten and has gained all the independence that comes with that milestone. Now with the baby not so much a baby anymore they will take him outside to play while I find myself alone in the house like the other day watching the three of them play outside through the front window.

I started to realize how in just a few short years I'll be able to leave the three of them to go for a run while they stay home, or actually go to the gym with their dad, or run to the store ALONE, or not have to rush home after work to meet the bus. After years of a baby or little ones needing something from me constantly I will not be needed so much. The independence all three of them have shown this past summer will just continue to grow even more. This is sad and exciting all at the same time.

I love the opportunity to do more things I want to do for me; love the chance to actually do stuff outside the house again with my husband. But I am sad this first season of motherhood with babies and young children is quickly coming to a close. I've been in this season for nine years now and  I realize how ridiculously fast nine years and these seasons of motherhood go. 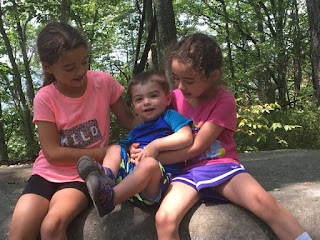 Posted by Stepping into Motherhood at 11:02 PM