The Invisible Monster of Cancer

I'm not sure if I can explain my odd fixation with childhood cancer or really cancer in general. I am not a big worrier. I leave that to my little sister and even my husband who worries about the girls getting hurt from this or that.

However, for years cancer has been like this monster lurking in the closest to me. I always worry when will it show its ugly face again. Cancer is something I imagine few families have escaped. Both mine and Nate's parents lost siblings to cancer by age 40. We've both had family members that faced it in their old age, but your 40s is still such a tragic age to die. I met my first child with cancer when a friend of mine's cousin lost her battle to a brain tumor at age 10. I follow countless media pages of children fighting this horrific battle. These children are amazing warriors. Their stories will break your heart and inspire you at the same time.

I often wonder do my friends with their young families look at their loved ones and worry who will it strike. Nate and I spend quite a bit of time, especially on our long drives, reading up on cancer research. As we work towards being able to make donations throughout the year cancer research and charities is always my first choice.

I'm a control freak. Those that know me well know this. I also have a hard time not doing or saying something when something brothers me. Cancer has always seemed like this invincible monster that I can't do anything about. I've seen more friends than I can count face this battle with their loved ones; I've followed, prayed, and cried for people I don't even know as they've faced this battle. Just as I'm praying for them,  I've also prayed please never let it be me or mine.

So as we head into a new year I think about what can I do. I hope to continue to make donations, but in the meantime I wanted to share a site for immunotherapy for cancer that I've been following. Radiation and chemotherapy I don't believe is the answer. It's such a deadly poison on its own, and I've read too much about what a money making industry radiation and chemotheraphy is to the pharmaceutical companies. It just seems in this day and age there has to be more options. We need to be focused on new treatments, and I really hope this one is as promising as they hope. So in 2015 I'm going to be following and supporting this new promising treatment for pediatric and hopefully all other cancers. You can learn more about this treatment as they move forward in 2015 by following their facebook page Strong Against Cancer or visit their website.

As I shared before when I wrote about pediatric cancer back in August with my Fighting Childhood Cancer post this is a disease that I feel is everyone's fight. The country went into almost mass panic when Ebola threatened; however, the outcry against the monster of cancer seems so silent in comparison even though it's probably claimed thousands of lives since the outbreak of Ebola. I don't mean to take away the importance of fighting Ebola, but to emphasize the importance of building the fight against cancer. It is there, the invincible monster, waiting in the shadows, for any one of us because none of us are immune, and I have seen what it can do. I do not wish that on anyone.

For now I hope you'll check out this organization and what they're doing. Consider donating to them in 2015, and as for myself they will be the first organization we donate to in 2015. Hopefully we can all celebrate some promising results from their research this year, and maybe this is the year cancer  will go down. 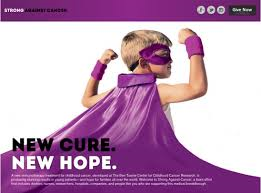 Recent Posts
Finding Contentment in 2014
The Days are Long and It's Great
Posted by Stepping into Motherhood at 5:21 PM