The Sex After Kids Club 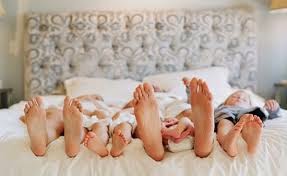 I always think there should be some secret women's sex club for moms. It's like the talk of sex becomes taboo after we become a mom. The kids can't know we do it, so no one else must know too either, right?

Let's be honest. After kids our relationship with our spouse isn't quite the same. I don't mean that in a negative way; just that it's different. Besides career and hopefully friends, our main focus was our spouse. Now there are kids who when they aren't exhausting us with all their needs and high amounts of energy, they are depriving us of our sleep. Sometimes by snuggling up right in between mom and dad.

It's like you're either not in the mood or when you are it's impossible to get time alone without little all seeing eyes.  Tell me I'm not the only one who wonders occasionally how much sex other parents with children are having. There are the ones you're sure are doing it way more often than you; then there are others you think probably hardly ever do it so you feel better about yourself.

Wouldn't be nice to just have a girl club where you share the secrets of how you find time and energy to you know? Or know what the norm for how often it should happen when you're in the trenches of parenthood. Sex is kind of important to maintaining a healthy marriage, right?

I have sisters and luckily we do talk about everything, and we once even brought my mom in on the conversation. Which still kind of makes me shudder because talking about that topic with your mom is almost as bad as accidently walking in on your parents. However, I think in this imaginary club it would be important to include moms of grown children. They did survive the child rearing years and keep their marriage going.

I think in this imaginary club it should include obviously lots of whine and maybe like cue cards where questions are thrown out on the table. Then everyone writes down their response to share. No one has to acknowledge which response is theirs unless of course the conversation of truth just really takes off.

Think I have future in creating board games???? Who would play?


I talk about marriage and sex after kids in my book,  Moms, Monsters, Media & Margaritas. It's also available in print and ebook on Amazon with a couple reviews as well.